Read an exclusive excerpt from I'll Go the Length of Meself by Dr. Philip Earle

They say that truth can be stranger than fiction. And that's what makes memoirs so interesting to me! This one is about Captain Guy Earle, North America's youngest master mariner. Read an exclusive excerpt from I'll Go the Length of Meself and then get your own copy! Follow the tour for even more. Best of luck in the giveaway! 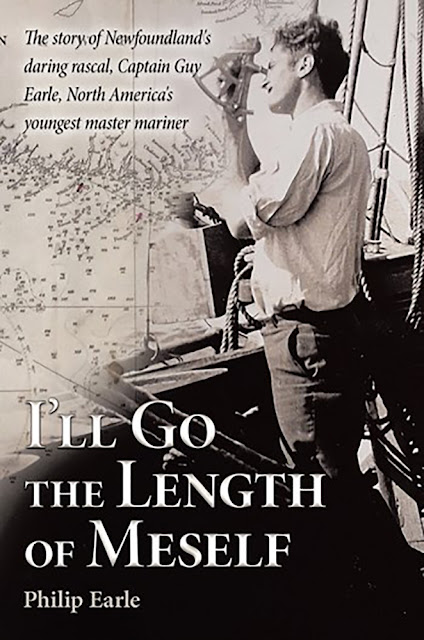 "Guy's life was a living adventure: he was a mariner and navigator of the first order, a character with the bravery of a Viking and the kindness of Robin Hood. Generous to a fault, he could never turn his back on someone in need, and would risk his life in a flash to save the life of another. He was like a godfather to the coastal people.
– Philip Earle

"Guy Earle commanded ships when he was a boy. He had the qualities admired by Newfoundlanders, and created maximum employment in the family business wherever he could. He was truly a Newfoundland hero."
– Geoff Stirling, (1921–2013), founder, CJON-TV (NTV)

"Guy had a mind of his own. He was a terrific leader and he played hard to win at anything he did. He was quick to size up a situation and quick to take action. He never, ever accepted the word 'can't'; if it was possible, it had to be done."
– Fred Earle (1924–1999), Guy's brother and partner in business

"Skipper Guy could take charge on anything. He had no fear and believed in himself. He could make friends with the Queen, as they say, if he wanted, and get anything he wanted."
– Fred Rossiter, (1905–1985), shipmate and friend of Guy.

"It must be a beautiful thing to know you saved someone's life. Guy Earle saved me. I've had a long life, a successful business, and raised a family because of him. He was a great man."
– Ed Wahlen, businessman and friend of Guy

"Guy Earle was the exemplification of courage in everything he did. His trade was with people and his warmth spread as widely as his countless business negotiations. He gave his life to his vision of the fishery; it was his gift to his homeland, a gift few men can claim to better."
– Maurice Quinlan (1910–1983), co-founder, Quinlan Brothers Ltd

"Guy Earle was sent here by God to give to people."
– Pasteur Harold Slade

"Captain Guy was a daring seafarer whose legendary adventures rivalled those of the heroes in such Hollywood films as Captain Blood, Down to The Sea in Ships, and Captains Courageous."
– Gordon Lore, author

"There will never be another Guy Earle; there couldn't be."
Read an exclusive excerpt:

At the end of a two-week trip, we were at our last harbour. We were anchored offshore, and four or five small motorboats were tied alongside our schooner. At lunchtime, the fishermen were sitting on the rail of the schooner chatting and smoking.

A barrel of apples meant for someone hadn’t been delivered and was tied to the rail for two weeks sitting in the sun. Skipper Steve Dowden asked the crew to check the apples to see what they were like. When the top was taken off the barrel, the whole thing was rotten—a gooey, brown mess. The smell was terrible, and it turned my stomach! The skipper told them to throw it overboard, but when they lifted it to the rail, the staves fell apart. Some apples fell overboard and the rest on the deck. The Labrador fishermen sitting on the rail had ragged clothes on, with their elbows out of their shirts and knees out of their pants. They had no laces in their shoes, except for one who used parcel twine. When the men saw the rotten apples fall on deck, they fell on their hands and knees into the apples trying to gather them up. They put them in their pockets and inside their shirts, and they even ate them! They had not seen an apple in years, and to them—rotten or not—it was a rare treat; perhaps their wives could make a pie.

It was the strongest moment of empathy I ever felt as a boy. I could not believe they had so little—I started to cry. I wanted to give them anything I had to help them, but I had nothing to give. At that moment, if I had owned the schooner, I would have given it to them!

My father lived an exhilarating life. With I’ll Go the Length of Meself, my hope is to showcase his legacy as a great mariner, businessman, humanitarian, and exhibitionist, along with many other attributes. There will never be another Guy Earle, there couldn’t be. This is his story, and I’m proud to share it.

WEBSITE - "There will never be another Guy Earle; there couldn’t be." (gothelength.com)
Dr. Philip Earle will be awarding a $15 Amazon or B/N GC to a randomly drawn winner via rafflecopter during the tour.
a Rafflecopter giveaway
Posted by Andi at 4:00 AM
Labels: book excerpt, giveaway, Goddess Fish, memoir, nonfiction