Murderous Interruptions: The Veils of Parallel Times by C.J. Carson

Author C.J. Carson is back with the second installment of her paranormal mystery series, The Veils of Parallel Times. Enjoy an excerpt from Murderous Interruptions and then download your own copy! Follow the tour for even more. Best of luck entering the giveaway! 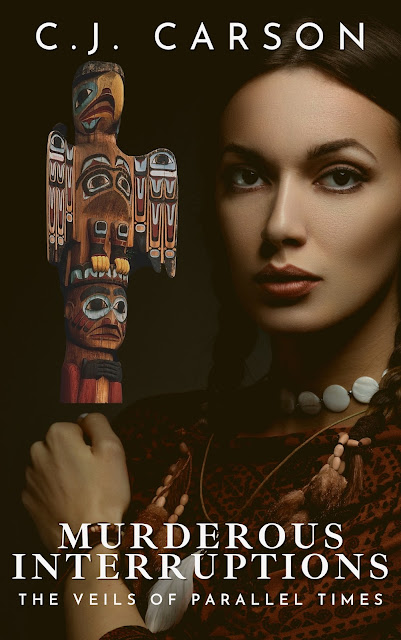 The paranormal mystery The Veils of Parallel Times continues with “Murderous Interruptions”. Allie Callahan’s nemesis is a challenging and formidable adversary.

Travel with Allie as she finally accepts and embraces her ancestral gifts to stop her archenemy who would have her destroyed for his own lust of power. Explore the depths of her relationship with this rival in this life and beyond the veil.
Read an excerpt:

I wasn’t traveling long when darkness settled over the woods, and the air became chilled and damp. I was getting nervous that I might not find my way back out of the woods in the dark. I stopped at a brook to give my horse a quick break and a cool drink. As I raked my fingers through his mane, something caught his attention. Nodding his head, he whinnied. When I looked up, I spotted a campfire in the distance. As I walked him in that direction, I found a heavyset elderly woman with long dark braids sitting at, and stoking the fire. Moving in for a closer look, she wore a dress made of brown suede and was wrapped in an animal skin blanket, shielding her from the cold.

I didn’t recognize her, but somehow, she was oddly familiar to me. Without speaking a word, she reached out, beckoning me. I could feel a connection that drew me in as I slid down from my horse and joined her. She opened the blanket and, as I sat down, she held me in her arms to warm me by the fire. I was suddenly in my youth again, swept up in warmth and safety I hadn’t felt for a very long time.

Raising her arm, the woman drew my attention to the flames, and as I stared into the blazing fire, I couldn’t pull my eyes away. It was as if it was speaking to me, its warmth drawing me in.

“This is your truth, my daughter of my daughter’s son. You are at your best and can do your work in this lifetime when you accept that you are one with the earth, fire, water, and elements. Only when you embrace them, can you move toward your true destiny. You are a rare spirit in that you are blessed with many gifts that you are yet to discover and recognize. Yours is not an easy path unless you embrace it. I am always here; you have only to think of me, and I will be in your thoughts to help you, as are all your ancestors.

“Little Bird, you have traveled and lived in many times and dimensions. Think of time as a path that runs horizontally, but many paths are layered, one on top of the other, in a horizontal pattern.

“You have the ability to move through them, not only in time, but from one dimension to another. It was the element of water in the stream that brought you to me. Keep your routes planted firmly into the earth, for that will ground you and keep you balanced. Tonight, I want you to look into the dancing flames and listen to them speak to you. It is past the time for you to begin to understand your truth, my dear. You do not have the luxury of putting it off any longer.”

Gazing into the flames, I saw visions of a young woman riding my white horse. As the horse moved up a hill and into a green meadow, the young girl was now a young woman. As I studied her, she looked nothing like me, but I felt like I was watching my memory unfold. She was riding on a horse with a knight that looked like he was from medieval times. As the horse reached the top of the meadow, I knew the woman in the vision was an image of me, and when the valiant knight turned to me, a chill coursed through my entire body. Although his face was unfamiliar, his deep blue eyes caught me off guard. Those eyes, those beautiful eyes. I would know them anywhere.

CJ Carson was inspired by a great story from a very early age. What brought her to this juncture in life and encouraged her to put pen to paper are the many rich experiences and opportunities of her life's journey.

While working in the medical field, she explored energy work and became a Polarity Therapist and Reiki Therapist.

Exploring acting brought her into the theatre world both on the stage and behind the scenes.

Painting introduced her to a group of artists that shared her passion for bringing a scene to canvas.

Her love of singing allowed her to travel twice to Europe as a soloist with conductor Sonja Dahlgren Prior, who inspired her to do something, she never dreamed possible.

CJ Carson has always wanted to write. Now she is introducing to the world her second published book, "Murderous Interruptions," from her trilogy, Veils of Parallel Times.


C.J. Carson will be awarding a $25 Amazon or B/N GC to a randomly drawn winner via rafflecopter during the tour.
a Rafflecopter giveaway
Posted by Andi at 4:00 AM
Labels: book excerpt, giveaway, Goddess Fish, paranormal