You can't go wrong with a good rock star romance. After all, how many of us have had that fantasy in our time? *sigh* Check out an excerpt from Rock My Heart by Nadia Blair and then follow the tour for more. Best of luck entering the giveaway! 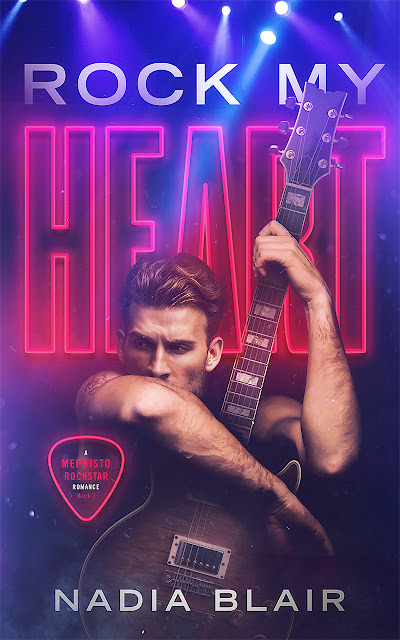 By day, Madelynn Crenshaw is the perfect senator’s daughter. By night, she’s a struggling artist. She doesn’t do scandal or media scrutiny, but when wicked rock god Sloan Elliot asks her to paint him for a charity event, she can’t resist. It’s for a good cause, right? She promises herself she won’t become his latest conquest—or have her love life splashed all over page one. During their studio sessions, Madelynn can’t deny their sizzling attraction, but it’s the man behind the rock god persona she really can’t resist. Sloan tempts her, teases her, and makes her long for things she’s never allowed herself to want…

When their affair hits the tabloids, and all hell breaks loose, Madelynn and Sloan must decide if they can risk love—and heartbreak—with the whole world watching.
Read an excerpt:

He led her into an empty dressing room and kicked the door shut behind them. Trapped. In the Wolf’s den? Ha. It was a large room, two walls taken up by vanity mirrors and counters cluttered with makeup, guitar picks, booze bottles, overflowing ashtrays. Smoke and mirrors. Far too apt, as metaphors went.

Madelynn spun away from her doubled reflection, bracing herself for disappointment. “May I have my locket back, please, Mr. Wolf?”

She gave him the same sharp-edged smile her mother had perfected when dealing with reporters. He looked her over, and she resisted an urge to tug at the lapels of her blazer. Not like he could see anything—the silk camisole she wore barely revealed her collarbone, much less any cleavage.

Sloan dug in a pocket and retrieved not a small box, but rather the locket on its chain. Her gaze fixed on his fingers as he held it up to the lights. His large hand should have looked clumsy, clutching the delicate chain, but instead, his fingers looked deft, graceful. Something within her caught with a half-painful lurch.

She held out her hand, but he moved behind her. Madelynn half-turned, frowning up at him. “What—?”

As if spellbound, she watched in the wall of mirrors as he fastened the necklace, his fingers skimming her nape. Shivers rippled across her scalp, down her spine.

Nadia Blair writes steamy contemporary romance featuring outrageous bad boys and gutsy girls who give as good as they get. She has a thing for snappy dialog, humorous situations, and swoon-worthy happily-ever-afters.

When she's not having conversations with fictional people, she enjoys summer thunderstorms, top-shelf whiskey, and rockin' out to a classic guitar solo.

https://www.amazon.com/Nadia-Blair/e/B082JYGZRR
Nadia Blair will be awarding a $25 Amazon or B/N GC to a randomly drawn winner via rafflecopter during the tour.
a Rafflecopter giveaway
Posted by Andi at 3:30 AM
Labels: book excerpt, book promo, contemporary romance, giveaway, Goddess Fish, rock star