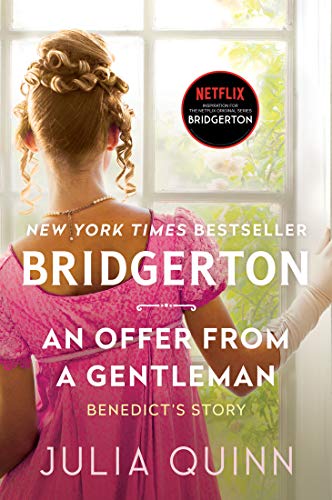 Sophie Beckett never dreamed she’d be able to sneak into Lady Bridgerton’s famed masquerade ball—or that “Prince Charming” would be waiting there for her! Though the daughter of an earl, Sophie has been relegated to the role of servant by her disdainful stepmother. But now, spinning in the strong arms of the debonair and devastatingly handsome Benedict Bridgerton, she feels like royalty. Alas, she knows all enchantments must end when the clock strikes midnight.

Ever since that magical night, a radiant vision in silver has blinded Benedict to the attractions of any other—except, perhaps, this alluring and oddly familiar beauty dressed in housemaid’s garb whom he feels compelled to rescue from a most disagreeable situation. He has sworn to find and wed his mystery miss, but this breathtaking maid makes him weak with wanting her. Yet, if he offers her his heart, will Benedict sacrifice his only chance for a fairy-tale love?
Goodreads * Amazon * BN
(affiliate link included)
**My thoughts**
I didn't like this one nearly as much as I liked the first two books. Benedict really disappointed me with his forceful insistence that Sophie be his mistress. This after such a magical first encounter! I mean, I knew it was going to take some time for true identities to be revealed. But his behavior was reprehensible no matter who he thought she was. Kind of a misfire on the intended Cinderella thing.
And yet I was still engrossed and zipped through it in one afternoon, looking for the redemption in Benedict that does eventually come. And it was fun seeing the other couples pop in. I still look forward to more from this family.
Posted by Andi at 3:48 PM
Labels: book review, historical fiction, historical romance, regency