Review of The Snow Bride by Debbie Macomber 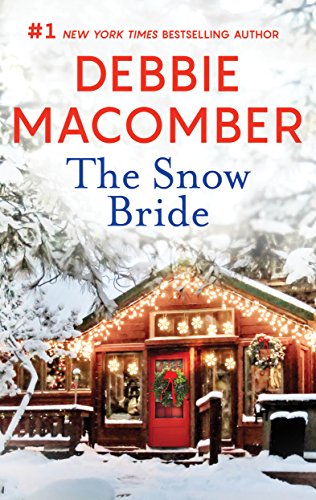 Get snowbound with this classic holiday romance by #1 New York Times bestselling author Debbie Macomber! A Christmas story for the keeper shelf!

Practical Jenna Campbell has done something impractical. She’s met a man on the Internet and now, a month before Christmas, she’s going to Alaska to marry him. Dalton Gray seems to be everything she wants in a husband—sensitive, gallant, romantic…

On the flight to Fairbanks, she has the misfortune to sit beside Reid Jamison, who obviously isn’t sensitive, gallant or romantic. However, he’s not impressed with her plan to marry Dalton, a man he detests (for good reason, as Jenna later finds out). So Reid takes it upon himself to change her destination—and her marriage plans.

Which is why Jenna ends up at Reid’s cabin in tiny Snowbound, Alaska. It’s currently a one-woman town (and the other woman’s out of town). That leaves Reid, a bunch of eccentric old men, a few grizzly bears—and Jenna. Kidnapped! And then there’s a blizzard. The two of them alone, stranded in Snowbound…

Maybe she’ll be a Christmas bride, after all!

Originally published in 2003
Book Links
Goodreads * Amazon * BN
(affiliate links included in post)
Also found in the anthology On a Snowy Night
Amazon * BN
**My thoughts**
This is one of the craziest winter romances I have ever read with some super quirky characters. It made me enjoy it immensely and it needs to be nominated to be made into a movie.
Jenna has always been very level-headed and the grown-up in her relationship with her mother. So it's totally out of character for her when she announces out of the blue that she is moving to Alaska for a new job.
But she flies out there and essentially gets herself kidnapped by Reid, who started out doing her a favor but is also trying to protect her from the louse she has come to see.
I admit I get conflicted with that because it is sweet and a little creepy rolled in some comedy. And you know he is a good guy.
The few other people in the small town are an absolute riot. I'm not sure I'd want to live there, but definitely want to visit.
Naturally, when Jenna and Reid get snowed in together, sparks fly. And then you have your usual outline of battling and making up that makes these stories fun. Add in Debbie Macomber's vivid descriptions and you'll find yourself whisked away to Alaska on a romantic, comedic adventure.
Click on a book title below to read my review of these other Debbie Macomber novels.
Call Me Mrs. Miracle
The Christmas Basket
The Forgetful Bride
Friends -- And Then Some
On a Snowy Night (An Anthology)
The Perfect Christmas
The Snow Bride
When Christmas Comes
Posted by Andi at 2:26 PM
Labels: book review, Christmas, contemporary romance