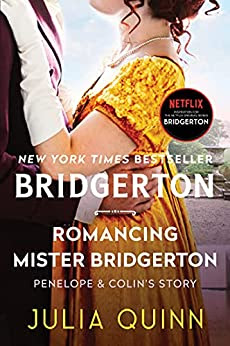 Penelope Featherington has secretly adored her best friend’s brother for . . . well, it feels like forever. After half a lifetime of watching Colin Bridgerton from afar, she thinks she knows everything about him, until she stumbles across his deepest secret . . . and fears she doesn’t know him at all.

Colin Bridgerton is tired of being thought of as nothing but an empty-headed charmer, tired of the notorious gossip columnist Lady Whistledown, who can’t seem to publish an edition without mentioning him. But when Colin returns to London from a trip abroad, he discovers nothing in his life is quite the same—especially Penelope Featherington! The girl who was always simply there is suddenly the girl haunting his dreams. When he discovers that Penelope has secrets of her own, this elusive bachelor must decide . . . is she his biggest threat— or his promise of a happy ending?
Book Links
Goodreads * Amazon * BN
(affiliate links included)
Also found in the second Bridgerton box set:
Amazon * BN
**My thoughts**
I was so delighted to get to this story because Penelope is one of my favorite characters. I find myself relating to her a lot more than any of the Bridgertons. Plus we have seen her and Colin dancing around each other for a few years now.
The other fun part of this book is the revelation of Lady Whistledown's true identity. Now, if you've watched the first series on Netflix, the revelations will not be a surprise. But it's fun to watch it play out in this book. I adore the scene with the official reveal. (And really wish they would have held off in the Netflix version.)
It's a good sign when a series continues to hold your interest even at the fourth book. And this one definitely makes up for the third, which is still my least favorite (six books in, at least). I also enjoyed the lead-in to the fifth book, another one I've been curious about for a while.
Posted by Andi at 8:50 PM
Labels: book review, historical fiction, historical romance, regency