No Pistol Tastes the Same: A PTSD Novel by Jacob Paul Patchen

PTSD is a real and difficult thing that affects so many people. Jacob Paul Patchen explores it in his suspenseful military novel No Pistol Tastes the Same. Read an exclusive excerpt and then follow the tour for more after you download your copy. Best of luck in the giveaway! 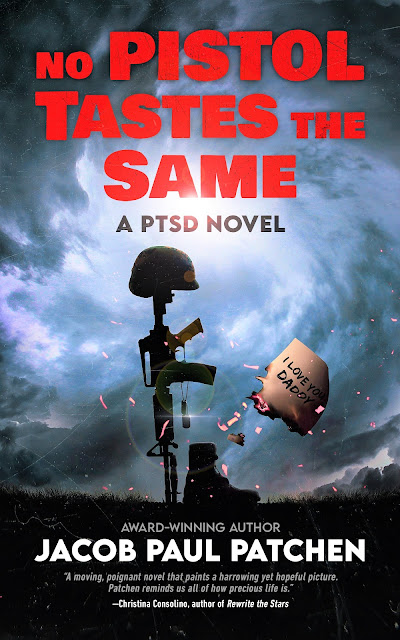 Sergeant JP Grimm didn’t pull the trigger. Now his Marine brothers are dead. All victims of a child in a suicide vest…a child that resembled Sgt. Grimm’s very own. But how are you supposed to take a child’s life? How can you kill someone that looks just like your own son?

Those same hazel eyes he saw in his scope continue to haunt him long after he left the desert death lands as he tries to reconnect with his son, Adin. JP battles another war at home against PTSD and the worthless, dejected thoughts that he is the reason his friends are dead. His wife, Lisa, struggles to let her stubborn husband work it out on his own terms. She does all she can to give him space, support, and strength—but her love can only go so far.

As the world shows signs of impending doom from a weakening magnetic field and flaring sun, JP, too, shows signs of his own impending doom. After pushing everyone away, JP must face his nightmares to restore his relationship with his son, save his marriage, and save himself before the modern world burns out in a fiery, electromagnetic disaster.
Read an exclusive excerpt:

A few moments later, Richardson hobbled over and plopped down on the edge of JP’s bed. “How ya holdin’ up, Sgt. Grimm? Need anything?” He said, leaning the crutches he hardly used against the frame and adjusting the black eyepatch over the fresh gauze at his brow. Doc made him wear it since his left eye was still hypersensitive to light after getting sandblasted and gashed by shrapnel in the explosion.

“Ready to take this damn thing off. I feel like a fucking pirate.”

JP cracked a short-lived smile. Any other time, and he’d let him have it: Yeah, a butt-pirate. Or, where’s your parrot, Captain Hook? But today, he wasn’t in the mood. Instead, he scooched his legs over for Richardson to sit and thought about how close his radioman came to losing his eye. “When’s it come off?”

Cpl. Richardson, still fidgeting with his patch, finally gave up on making it comfortable and instead opened a Maxim magazine seemingly left over from the previous wars. “Well, would’ve been a week ago if I didn’t rip out the stitches trying to carry my pack the other day. I’m an idiot. A stubborn asshole,” he said, reminiscing about trying to look tough and pull his own weight, even after he sprained his ankle in the explosion. “Doc said a couple more days, probably just before we leave for Tent City.”

Can you even read that thing? JP wanted to ask but held back. “Well, at least you won’t have to wear it home. Right?”

Richardson flipped through the pages of the Hometown Hottie contest. “Yeah. I’m just ready to be done with the pirate jokes, you know.” He shrugged. “You guys need new content; the same jokes are lame.”

JP chuckled, sighed heavily, and picked at the gray paint on the metal bar above him. “Look, man…I’m really sorry.” His chest shuddered, and his eyes glossed over. A sudden rush of emotion came over him. He sniffed and wiped his nose on his sleeve. “They’d all still be here if it wasn’t for me,” he mumbled to the chipped-paint bed frame above him. 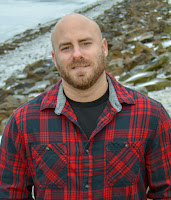 Jacob Paul Patchen is an award-winning author and poet of inciting fiction and provocative poetry.

Jacob earns his inspiration through experience and believes every book has a purpose. He writes powerful, emotional, and thrilling stories about mental health, war, social stigmas, and other taboo subjects in order to bring awareness, change, and hope to those who need it.

Raised in Southeast Ohio, he’s a sucker for fast workouts, long laughter, and power naps. Snacks are his love language, and he thinks he’s a Pisces. Check him out and join his newsletter at Jacobpaulpatchen.com.

Jacob Paul Patchen will be awarding a free signed copy of NO PISTOL TASTES THE SAME to a randomly drawn winner (Print US only/international winners will receive a digital copy of the book) via rafflecopter during the tour.
a Rafflecopter giveaway
Posted by Andi at 3:30 AM
Labels: book excerpt, book promo, giveaway, Goddess Fish, military, PTSD