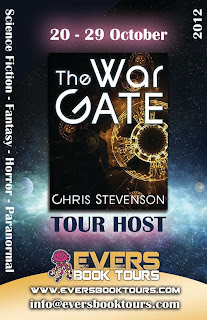 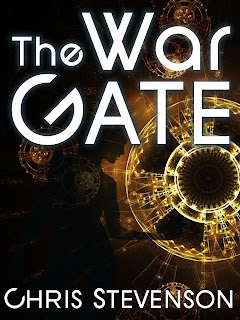 Welcome to The War Gate, a paranormal romance/thriller with a time-travel twist.

Tag Line: Through a miraculous conception, Avalon Labrador must give birth to herself before she is executed, to solve her husband's murder and her own wrongful conviction.

When the reincarnated Avy Labrador is kicked out of her stepfather's house on her 18th birthday, she has no idea that the man who raised her framed her mother to cover his murder so he could acquire a major software empire. Now, years later, with the help of her magician boyfriend, Sebastian, Avy is about to discover that her birth was otherworldly and for a purpose. The ancient Roman God Janus was so appalled by the heinous murder of Tom Labrador by his brother Drake that he opened up a War Gate.

Avy has received half of her mother's soul light and half of a God's essence. Her mission is to put the real killer behind bars. The only catch: she must learn to “Gate-Walk”, that's time traveling to the layman. She soon finds out that she is a drunk driver on the space/time continuum super highway.

Just when she believes she has too much on her plate to contend with, she learns that she's pegged the wrong man as the killer…her boyfriend is not who he appears to be…and Janus, the so-called God of new beginnings, doorways and gates, just might be the biggest conman and liar she has ever met.

The War Gate has a heavy mystery structure, as well as paranormal/magic and romance elements.

War Gate Author's Note: The antagonist character, Wax Man, is not for the squeamish. I warn you ahead of time that he is the most disgusting, vile creature/human you're ever likely to read about. Not for younger readers under 13.

I write SF, fantasy, horror, YA in all genres, paranormal romance and non-fiction articles. I live in Sylvania, Alabama, and I've been actively writing for over 33 years, publishing for the last 24 years. I'm represented by my third agent, Sara Camilla, who has four of my titles out on major submission.

MAGAZINE--SHORT FICTION:
Stellar by Starlight, to Amazing Stories, 1988.
The Lonely Astronaut, to Amazing Stories, 1988.
Temperamental Circuits, to Gordon Linzner of Space & Time, 1989.
Things that go Clump in the Night, to Richard Fawcett of Doppelganger, 1989.
Dance the Macabre and Dance it Well, to Erskine Carter of Ouroborous, 1989.
Future School, to Chris Bartholomew of Static Movement, January 2006.
The Incredible Mr. Dandy, to Not One of Us.
Planet Janitor The Moon is not Enough, to Engage Books, 2-12-2012
Other magazine appearances from 1988 to 1991 include, Alpha Adventures, Small Press Writers and Artists Organization, and Sycophant, and four non-fiction articles to Dollar Stretcher Magazine

AWARDS:
Finalist in the L. Ron Hubbard Writers of the Future Contest, for Temperamental Circuits, 1987.
First place, grand prize winner in the YA novel writing contest for Entranced Publishing.

JOURNALISM:
350 newspaper profiles, stories, and interviews to Sunset Publishing, Anaheim, California, appearing in The West Coast Jewish News, The Senior Citizens Reporter, and The Military Review.  From 1988 to 1991.

CONTENT WRITING
Over 1,500 non-fiction articles for major content site, including subjects for automotive, home and garden, engineering, marine, aircraft, construction and machinery and off-road vehicles and trailers. Grammer score = 4.2, with research score of 4.4

ORGANIZATIONS/POSITIONS:
Served as content editor of Sunset Publication (see above) for three years.  Responsible for all writing assignment content, filler and artwork.
President and founder of Heartland Writers Group, Huntington Beach, California, from 1987 to 1991

AGENT
Presently represented by the Sara Camilla Agency. Books in Agents inventory include Dispossessed Incorporated, Fusion, Screamcatcher, The Girl They Sold to the Moon, and The Ice Age Discoveries of Hemet California.