Excerpt from "Going Home" from Angel Sharum's 'After Life'

My friend Angel Sharum recently released another short story collection. This one consists of three ghost stories and is a true bargain at only 99 cents! Check out an excerpt and then head over to Amazon to buy! 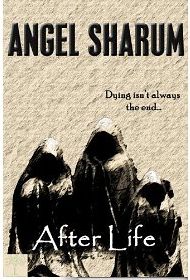 Not all ghost stories are scary. In these three short tales from Angel Sharum, the ghosts right some wrongs, help others and take care of their own affairs.

*Going Home: Addie has suffered long enough, but when it’s her time to go, she can’t bear to leave Rupert in a state of despair.

*The Dead’s Rights: Just because you’re dead doesn’t mean you can’t make sure you’re buried properly. Well, as long as you’re quick about it that is.

*Revisiting: Sometimes, you have to die to set things right.

Read an excerpt from "Going Home":


A voice from the light called out to Adeline. At the sound, warmth surrounded her, and, Adeline noticed, Rupert sit straight up as well. She watched as Rupert looked around the room. “Addie?” he questioned.Adeline couldn’t help herself. She rushed to his side. “I’m here,” she whispered into Rupert’s ear. She also slowly ran her finger down the back of his neck. A gesture she had done hundreds of times over their fifty years together, and one that Rupert thought he would never feel again.He jumped at the touch and twirled around. Adeline wrapped her arms around him and he stilled. While she knew Rupert couldn’t see her, Adeline was certain he felt her. She hugged him tighter and kissed him on the lips one last time.

Writing short stories allows her to take readers on journeys of imagination that linger beyond "The End" and poetry offers a way for her to shake up people's emotions and make them think. According to Angel, when she accomplishes her goals a truly special connection exists between her and her readers.
Posted by Andi at 12:00 AM
Labels: excerpts, ghosts, short stories