Read an excerpt from 'Crimson Footprints' 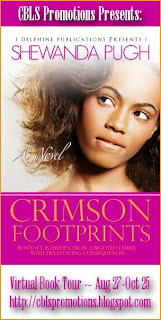 Welcome to the CBLS Promotions presentation of Crimson Footprints by Shewanda Pugh. Check out these excerpts and then enter the Rafflecopter below! 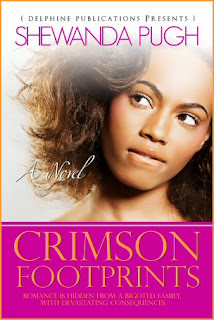 BLURB:
When an insecure, bi-racial woman begins a cloak-and-dagger love affair with a Japanese American man, she is intent on keeping her bigoted family in the dark—albeit with devastating consequences.

On the night of her brother’s murder, Deena Hammond stumbles upon Takumi Tanaka, lost and on the wrong end of a .32. After rescuing him from the certain fate driving through the hood in a Porsche will bring, a sweet kind of friendship begins. A balm for her grief. Maybe, Deena likes to think, it happened the day her white mother killed her black father. Or maybe, it was always a part of them, like DNA gone bad. Whatever the case, Deena knows that her family would never approve, hell, never acknowledge her fast-growing love for Takumi. And had he never made love to her that way, in that unraveling, soul-searching sort of way, she could’ve done the same.

But love’s a devil that way.

So, their game begins. One where they hide what they are from everyone. Anyone. And Tak understands this—for now. After all, Deena’s career hinges on the favor of her mentor and boss, his hard-ass of a father. And the Hammond family is already stretched thin with grief. Yet, each step Deena takes toward family and career brings her closer to an acceptance she’s never had. And away from him.

“I wish that I didn’t want my family’s love so bad. I wish I could be one of those people who wore leather jackets and didn’t give a damned.”

Tak shot her a look. “You’d be musty if you wore a leather jacket in this heat.”

Deena grinned. “You know what I mean.”

He shrugged. “Who doesn’t want a decent family, Dee? It’s not much to ask for.”

Tak paused to pluck a seashell from the sand. Chipped and polished by time, it shone under the glint of a fast setting sun. “I don’t know the answers,” he said. “But they seem to be in things like this,” he held up the shell.

He shrugged. “Well think about it. What’s a shell? It’s just a—a hard, protective outer layer.” He hurled it in the ocean. “The same is true with family. They’re an outer layer, a protection from the world. At least that’s what they’re supposed to be.” He paused. “Think about what happens when you screw with an animal that has one of those hard shells. What does he do?”

“Right. He retreats.” He thumbed the shell thoughtfully. “Now imagine if you were to rip the shell off a turtle and expose him. What do you think you’d find?”

Deena cringed. “Something soft and hurting.

“And dead, if not close to it. So, our hypothetical turtle, who’s able to stand our shell transplant, needs another shell, another form of protection. And so do you.” Tak handed the grooved and sand-polished subject to Deena. She looked down at it.

“So, how’ve I been surviving all this time? What’s my shell?”

Tak grinned. “Tell you what. I’ll let you know when I crack it.”

A slender, striking man of Asian descent was on the wrong end of Anthony’s .32. With arms raised, his hands were splayed in a show of defenselessness. His expression was calm, despite the growing crowd of onlookers and the pistol in his face. Behind him, an old woman made the sign of the cross.

“Anthony!” Deena cried, rushing towards them. Her brother cast a single sideways glance but kept his gun level.

Deena turned her attention to the Asian man. She was struck by his eyes, wide and heavy-lidded. His mouth was generous, his square face softened by layers of thick black hair. He had boyish good looks and a long, lean athletic frame.

She was certain he was Japanese.

Deena turned to her brother. “Will you put that thing away?”

The two stared at each other, older sister, young brother, eyes narrowed. When he didn’t move, Deena stepped between the gun and the stranger, her eyes level with the barrel. Anthony lowered the gun with a sigh and Deena seized the opportunity to snatch it.

She turned to the stranger. “I assume that’s your car,” she said, nodding towards a sleek gray convertible parked haphazardly, a shiny nickel in a murky puddle. He nodded, his glossy black tresses falling into wide almond eyes.

Deena turned to her brother, hand extended. He dropped the keys in her palm with a sigh, a new Ferrari slipping from his grasp with reluctance.

She passed the keys to the stranger and their fingertips brushed. Something warm and foreign turned over in her and her lips parted in surprise. She thought she saw the makings of a smile in his eyes, but she dismissed it. He took the keys and thanked her. And as she watched him peel off with the top down on his sleek convertible, Deena’s pulse skittered then and long after. 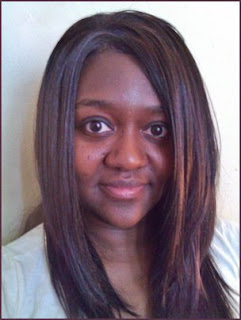 ABOUT THE AUTHOR:
Shewanda Pugh is a native of Boston’s inner city, though she now lives in sunny Miami, Florida. She has a bachelor’s degree in Political Science from Alabama A&M University and a Master’s in Writing from Nova Southeastern University. Fueled from a young age, her passion for crossing societal boundaries like race, class and culture, is the inspiration for both her cluttered bookshelf and her writing. When she’s not busy obsessing over fiction, she can be found traveling, nursing her social networking addiction or enjoying the company of loved ones.

a Rafflecopter giveaway
Posted by Andi at 4:00 AM