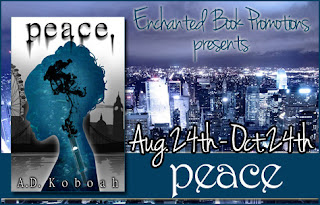 Welcome to the book tour for Peace by A.D. Koboah, presented by Enchanted Book Promotions. 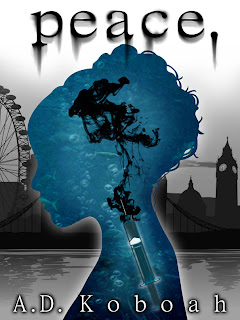 Peace Osei is young, beautiful – and addicted to heroin; the only thing that can keep painful past memories at bay. But when a face from her past re-enters her life demanding answers to questions she is not ready to face, it threatens to send Peace swimming deeper into self-destructive waters. Having spent so long drifting away from the real world, can Peace find the strength to face the past and banish her demons?

This book struck a chord in me within that very first chapter. I could feel Peace's despair, confusion and loneliness and it stuck with me throughout the entire book. This book really is full of feeling and the author is able to make you feel what her character is feeling.

As Peace shares her story, she weaves back and forth between the past and the present, to slowly unravel the story and share it. Just as painful is her friend Eva, who also has a troubled past. The two women are trying to make themselves and others believe that they have it all together and are fine, but they aren't. I was captivated by their plight and stayed up late reading.


Author Bio
A.D. Koboah was born in London and completed an English Literature degree in 2000. Peace is her second novel. Her first novel, Dark Genesis, is a Paranormal Romance that was inspired by the concept of dehumanisation. She is currently working on a screenplay and will begin the sequel to Dark Genesis shortly.

a Rafflecopter giveaway
Posted by Andi at 6:58 AM
Labels: Enchanted Book Tours, excerpts