Excerpt from "If" by Brittany J Chadwick in the anthology 'If'

Read an excerpt from "If"

"I'm sorry..." He didn't like how that sounded, like he was apologizing to some teenage cat burglar in his own house.

Greta shrugged again. "I can make it better, I think. Just gimme a week."

"Wh-what? Wait, I'm lost, who are you and what the hell are you doing in my apartment?" He found his agitation and put it to use.

"Beats me. It's the rules." She shoved her hands in her pockets and leaned away.

She turned her head to look at him. "The rules of being an IF." She cleared her throat. "Section Thirteen clearly states that if a claimed girl or boy humanoid no longer believes in their designated IF, then said IF is to report to the closest vessel of friendship ASAP. That stands for as soon as possible, you know."

Frank balled his fists. "I know what it means, and I still have no idea what you’re talking about."

She turned completely and clasped her hands behind her back. "I'm an IF - Imaginary Friend." When he didn't react, she hit her forehead. "God, don't you know anything? Imaginary Friends, you know, invisible friends of lonely children." 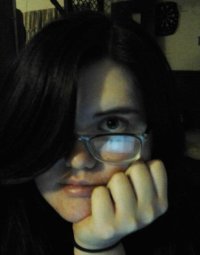 Brittany J. Chadwick was born in El Paso, Texas (1989) and lives there still. She has been working on publishing her voice and has finally done so with her first publication, 'IF - A Short Story Anthology' alongside her fellow Circle 8 Writers Group.

She looks forward to more publications with C8 Group as well as a solo career to expand the little worlds in her head for all to enjoy. She encourages outreach and constructive criticism and will never shy away from an opinion on her work.
Posted by Andi at 12:00 AM
Labels: short stories