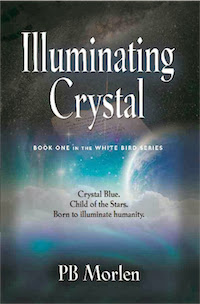 Eighteen-year-old Crystal Blue was born to illuminate humanity. When she finds an ancient manuscript in the basement of a bookstore, an intense transformation activates the eleventh layer of her DNA in preparation for the mission she was born to fulfill: she must travel the world and unveil the secret and sacred knowledge held by indigenous groups, knowledge that will illuminate humanity, secrets that dark forces have killed to keep hidden. The transformation harnesses her with unique powers, but also makes her vulnerable to these dark forces that now seek to destroy her. But there's a problem; Crystal doesn't want to go.

Author Bio:
PB Morlen’s thirty-year journey through life’s ‘mystery schools’ taught her to trust her own voice, listen to her heart and pursue her dreams: simple secrets to a magical life. And now she has a story to tell, a grand adventure where dreams are most common and divine secrets are unveiled.
Posted by Andi at 12:00 AM
Labels: book promo, Featured Fiverrs, free, inspirational