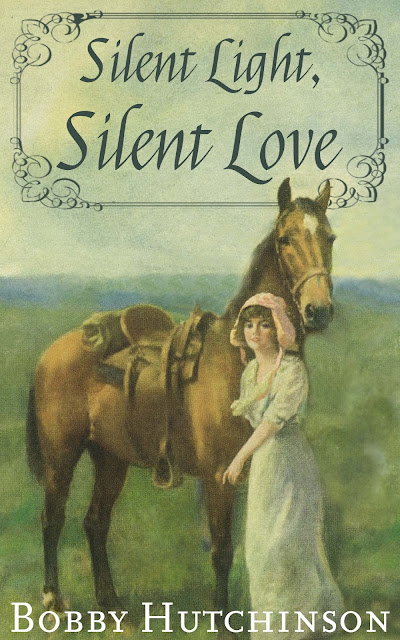 Betsy wants to be a photographer, but it’s 1898 on the Canadian prairies, and she’s deaf. Women don’t have careers, especially not deaf women.

James Macleod is a North West Mounted policeman with a dark secret . He’d like to marry and have a family, but he’s haunted by a tragedy in his past.

Can two unusual people find true love and happiness in spite of such obstacles?

At last she turned back to him, her face troubled. “You are honest with me, I will be with you,” she signed. “Man I thought wanted to court me wanted—“ she paused, looked away, and then went on, “Wanted something else.” Her entire face turned fiery red, but she bravely held his gaze as her fingers spelled out the story. “He try to hurt me, I had hard time fighting with him, got away, but scared me. Makes me afraid now.”

The stark and simple words painted a horrifying scenario. As the full import of what she meant sank in, James felt rage building in him. That any man would take advantage of a woman or mistreat her in any way was beyond his understanding, but to think that some—some monster would try to—of course he’d tried to rape her. He wondered how far the assault had gone. He struggled to control his fury, lest he frighten her even more. He took several deep breaths and did his best to control his expression.

“What was his name?” James would make it his business to seek the heathen out and teach him a much-needed lesson. His fists curled in anticipation.

But Betsy shook her head. “Not important, I try not to remember. Would make big trouble, Noah would be very angry, make me stop riding by myself, would try and find man, much, much trouble for everyone.” She swung up on Jingles, waiting for him to mount as well. “Noah worries, cares about me. He has big family, doesn’t need to worry for me, too.”

The fact that she would be more concerned about her brother-in-law than herself touched James’s heart. He mounted Ajax, deciding not to pursue the matter. Not now. But he vowed that he would learn who had assaulted her. When he did, he’d beat the bastard to within an inch of his life.

“Noah is best brother-in-law to me,” Betsy continued as they rode. “Annie married with Noah, never saw each other, only wrote letters. Annie wouldn’t come here from Toronto unless married already.”

A mail order bride. Noah knew of several such marriages, some of which were successful. On the whole, he believed most were not.

“Didn’t tell Noah I was sister. Said I was daughter, said she was older. Noah wanted older woman. Didn’t tell I was deaf. We were very, very scared he would send us back.” She smiled and shook her head. “Annie tell him big, big lies in letters, that she can cook, that she know about farming things. But she never saw cow before, she is afraid of chickens.” She made the sign for running away, and she giggled.

James had to laugh with her. She had the most engaging giggle, the kind that would stir pleasure in everyone around her. Every moment with her was a delight.

“Never saw farm before, Annie. Never cooked anything but eggs and bacon, potatoes and maybe beans. Annie scared of horses, cows, especially of geese, never gathered eggs or milked. We are city girls, only work all day hard in mill. But Noah tell big lies also. He has father, Zachary, very sick, very cranky, needs much care, Noah never tell Annie. So they are even.”

She made the sign for balance, and he nodded, wanting her to go on.

“Very hard at first, Annie’s bread, phfft, bad, hard like rock, feed to chickens.” She shook her head and screwed up her face. “Zachary throw dishes at Annie, very angry, can’t speak, frustrated. Stroke. So I teach him my signs.” She smiled sadly. “He teach me many things. Very wise man, Zachary, he and I friends, neither can talk with voice.” She made the sign for love, a little way out from her heart, signifying her deep affection for Noah’s father. “He teach me to carve, make small animals from soap. He tell me about building house, about his wife, he love her very much, miss her. Then he die. I miss him, bad, bad. Heart aches for him still.” She mimicked tear marks down her cheek.

“So Noah and Annie worked things out? Her bread is very fine now.” James was enchanted by her flying fingers, her dramatic expressions as she told the story.

Betsy nodded, indicating that Annie had become pregnant. “First Christmas, Mary is born, big storm, no doctor.” She rolled her eyes dramatically. “Noah and I help Annie. Noah has book on how babies are born.” She pantomimed Noah frantically flipping pages and wiping sweat from his forehead, his hands trembling and hers as well. “I am so scared, Noah too. But Mary is okay, Annie too. Noah and I—“ She held a hand out flat and tipped it from side to side as if it was touch and go with them, and again, Jamie laughed. He could well imagine how traumatic that birth must have been. A first delivery, as well. They’d been very lucky.

“All other babies, Noah has doctor come to farm every day when time is near.” Her face grew somber. “Two years ago, Annie loses baby, three months. Very bad, we all cry, Annie sick for long time, before baby comes and after. This time, maybe will be better, Annie not sick all the time like she was then.”

“When is the babe expected?”

She was nearly seven months along. “If she’s feeling well, surely that’s a sign all will go well?” He wanted to reassure Betsy. He couldn’t keep his eyes off her. She was so vibrant, so alive and animated. Uninhibited, which was so refreshing.

James thought of the other young women he’d met here on the prairies, and also back in Scotland. More of them in Scotland than here in Canada—there was a definite shortage of eligible women on the prairies. But in both countries, there was a strict code of conduct for ladies, and most of them adhered to it. Unfortunately, in his opinion, it made them boring.

Passion wasn’t something young women generally demonstrated. It wasn’t considered lady-like or polite to even mention pregnancy, much less discuss the actual birth with a man. Betsy’s deafness made her refreshingly open, and James found it fascinating.

Bobby Hutchinson lives, breathes, reads and writes books. She lives in a coal-mining town in the Rocky Mountains of B.C., Canada, with two rabbits. Her favorite quote is, “When you change the way you look at a thing, the thing you look at changes.”
Posted by Andi at 12:00 AM