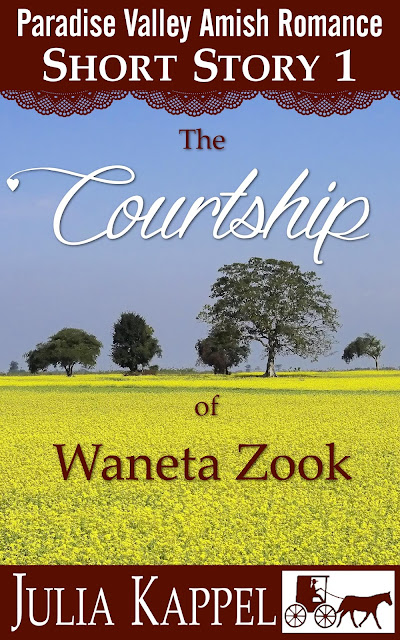 Waneta Zook has bigger responsibilities than many of the other Amish girls her age. Her mother has passed away, leaving Waneta to look after her three younger siblings... and now her father is in failing health. So, Waneta has humbly resigned herself to the fact that she will probably never marry because she knows that her father will need to be taken care of even after her sisters and brother are grown.

However, the Lord has other plans for Waneta!

THE COURTSHIP OF WANETA ZOOK is a clean, uplifting and complete Amish short story from Julia Kappel, author of the popular Amish Romance novel, THE ENGLISCH GUEST.

“But seek first the kingdom of God and his righteousness, and all these things will be added to you.”  Matthew 6:33
+ + +

Waneta Zook had bigger responsibilities than many of the other girls her age. At sixteen, she had to look after her three younger siblings: Katie, Sarah and Jacob while her dat tended to the farm. However, her dat was in failing health and that meant much of the farm work also fell to Waneta, except when they were able to get in some hired help. The Zook shtamm didn’t have much money, so it was hard to pay someone to help. In spite of that, Waneta believed her village in Paradise Valley was a good place to live. It was a giving, caring community that took care of its own.

Waneta’s maemm had passed away when she was eleven and her youngest sibling was four, so Waneta had had no choice but to stop going to school and stay home to look after her bruder. Thankfully, at that time her two younger shveshtahs were able to help her with chores in the morning and when they got home from school. Jacob was a spirited child and keeping an eye on him had taken up much of Waneta’s time. When he went to school two years later, Waneta found it much easier to get everything done.

Because of her added responsibilities, Waneta didn’t have the benefit of a rumspsringa, which would have given her the opportunity to meet boys in the community and, hopefully, to pick her future husband. She had resigned herself to the fact that she would probably end up never marrying, because she knew that her dat would need to be taken care of even after her shveshtahs and bruder were grown. Instead of being upset, however, she humbly prayed to Gott that he would give her peace and help her younger siblings find good love matches. So, Waneta was surprised when her dat approached her about the situation.

“Dochtah,” he said, “you know that I’m not getting any younger and that my health isn’t getting any better either. Usually, a farm goes to a mann’s son, but your bruder is only nine years old, and I do not know if I will be here when he is grown.”

“Please, Dat, don’t say that,” said Waneta, “you could live for a long time yet.”

“Jah, I could,” said Issac Zook, “but only if I do not work too hard. Our community is gut to us, but everyone has their own schaffe to do. I think it is time that you found your love match, and when you get married, I will give you this farm as a wedding present.”

“But, Dat,” said Waneta, “I don’t really know the boys in our community, just the ones who have helped us out... and I don’t even know them well.”

“I will put out the word,” said Isaac, “that I welcome men to court you... men who also want to help on our farm, so that when the time comes for them to marry you, they will also know that the land will be theirs.”

“What if they only want to come to court me because they want the farm?” said Waneta.

“Our farm is gut,” said Isaac, “but it is in need of much schaffe; there are other, more prosperous farms in the community with dochtahs that are ready to pick a love match too. I hope only men who are interested in you come around, but if others come, you will be able to tell if they care about you. You are a smart dochtah and I owe a lot to the schaffe that you have done here. Your maemm would want you to have a good love match, and if I should die before it is time, I will know that this farm and my kinner are looked after.”

“Jah,” said Waneta, “I understand. I will try to make a good love match for me and for our shtamm.”

“OK, Dat, you know best,” answered Waneta calmly. Inwardly, however, she felt less sanguine. Although she was looking forward to courting, Waneta was worried that she might say or do the wrong thing because she had been at home so much instead of out in the community, except for when she went to church or to the occasional quilting bee.

Three days later, when Waneta and Katie were doing the dishes, Waneta’s first gentleman caller came to the hause. Waneta’s dat met him at the door and permitted Waneta to go for a walk with him.

“I’ll just be a minute,” said Waneta when her father came to tell her, “I need to wash up a bit.” She took off her apron and made sure that her work dress looked okay. She brushed her teeth, put on her kapp and went outside. She was met by John Miller. She knew him from church and the grocer’s shop where he worked part-time. She also knew that he was the youngest of four boys in his family and that his family’s farm would probably never be passed on to him.

“Your dat has given me permission to court you,” said John. “May I take you for a walk?”

Waneta smiled shyly. “Yes, you may.”

John and Waneta stepped onto a moonlit path that led around the barn and a small field. The stars shone brightly in the early summer sky and the air smelled of honeysuckle and freshly cut hay... 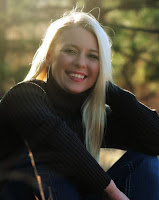 Julia Kappel grew up in southern Pennsylvania near an Amish community in Lancaster County. Now she lives in North Carolina where she enjoys camping and hiking in the Blue Ridge Mountains and singing in the choir at her church. She is an avid reader and a devoted fan of Jane Austen, Charles Dickens and CS Lewis.

As a Christian, Julia deeply respects the commitment Amish people have to their faith and to each other. The kindness and gentle humor she experienced among the Amish has inspired her to write about these humble, persevering people.

If you love Julia's clean, enchanting Amish romance stories, visit her blog for the latest news on her upcoming books -- http://juliakappel.com.

Also, check out her page at facebook.com/JuliaKappelBooks where she shares many things related to Amish and Christian romance and would love to hear from you.
Posted by Andi at 4:03 AM