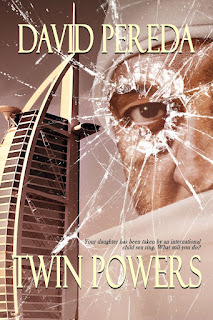 While vacationing with her mother in Havana, a 10-year old American girl is taken by members of a child sex ring intent on selling her into forced prostitution. When the human traffickers avoid capture and escape the island, the father of the girl, surgeon Raymond Peters, decides to take matters into his own hands and initiates a worldwide investigation. The Cuban government assigns a lethal professional assassin named Marcela to help Raymond track down the culprits. The search for Stephanie takes the unlikely pair – a man who has sworn an oath to save lives and a woman who kills for a living -- to the Middle East in the hunt for the mysterious mastermind, Mohamed. Working against the clock, Raymond and Marcela must pull out all stops to save Stephanie and flee Dubai before Mohamed and his gang of thugs kill them.

The full moon reflected on the beach waters, multiplying itself like enormous gold coins with each gentle wave.

They were sitting on the porch of Marcela’s house on a secluded beach in Havana. Raul Castro
had been true to his word. Her old house had been intact and spotless. There were a lot of recollections in that house for her. Every room evoked a special memory for her. She had made love, and she had killed, in that house. She had been attacked and beaten, but she had survived.

The altar to Chango in the main room of the house had taken her fifteen years to build. Every object on it was special to her. The two-foot-tall statue of Chango in the middle she had commissioned from Cuba’s finest sculptor and paid for with contraband dollars. She had spent three years carving the huge figures of Oshe and Shere, Chango’s bodyguards, from the hardest and darkest mahogany. The antelope horns, symbolizing Oya, Chango’s wife, she brought from Africa. The jade miniature of twin little girls at Chango’s feet, she bought in Mexico at the Teotihuacan pyramids.

The secluded beach where she swam naked every day held countless reminiscences too; the feel of the sand itself; the salty waters where she once had an encounter with a shark; the training area behind the trees where she practiced four hours every day.

Everything in and around her house brought so many warm recollections to her. And now she was contemplating leaving her home and all her memories to go live permanently in Miami with Ray. She was split in two. Cuba and her home pulled her one way; Ray and her love for him pulled her another way. She had never been so indecisive in her life. One moment she was ready to pack and leave. Five seconds later, she was convinced she would stay. How could she even think of leaving her country, her house, and the only life she had ever known behind? And all because she was in love with one man, an older man at that, one who could be her father. A moment later, she would argue with herself that change was good and necessary when one felt too comfortable in one place. Change builds character, challenges you, and makes you learn new things. Her English wasn’t very good. She could perfect it in the United States, for instance.

All this thinking was giving her a headache. Her decision could wait. Now she needed exercise.

Ray was looking at her with that especial expression of his that always made her want to hug him so hard she could get inside his body.

“Hey, did you fall asleep on me?” he asked. “You’re kidding about going swimming naked, aren’t you?”

She stood and peeled her clothes off.

“What about your neighbors?”

“What neighbors?” She started undressing him, beginning with his T-shirt. “Have you seen any neighbors? This is a secluded beach, kimosabe. There are no neighbors.”

“Hey, wait a minute,” Raymond protested as she started unzipping his shorts.

He did as ordered. When she finished undressing him, she stared appraisingly at his naked body, making a bit production of it. She could tell he was a little nervous.

“Do I pass inspection?” he asked.

“I don’t know,” she said in a serious tone. “You’re old enough to be my father. Gaining a little weight around the middle, losing your hair; your package is a little too small for my taste.”

“Ouch!” Raymond looked down at himself. “You really know how to make a guy feel good.”

“But I love you anyway.”

Marcela started running toward the beach, feeling the breeze on her face and smelling the salty scent of the sea. A moment later, she heard Ray’s footfalls coming behind her. A long time ago, she had learned that happiness consisted of relishing the little moments in life. She was happy.

If you like intercontinental mystery and intrigue, feisty females and intricate plots, then this is the book for you! So many characters are battling each other all around the world, from Cuba to American to Dubai, with some Pakistanis thrown in. At times, I had difficulty keeping all of them straight.

There is a lot of baggage in these characters' pasts, and I got the impression that many of them had already shared their stories. I did discover that some of the characters have already been featured in other books in the series, though this is supposed to be a standalone novel. I don't know if I would have better followed the twists and turns had I read the other books?

I have to admit that the title of the book made me think that there would be more about the connection between the twin girls. It was such an interesting plot point that could have added a lot more to the story! I did enjoy the multitude of languages included and got the sense that the author was familiar with a lot of the locales.

It does read quickly and has a lot of twists and turns. It was different from my usual thrillers, but I know will appeal to many readers.

David Pereda is an award-winning author who enjoys crafting political thrillers and mainstream novels. His books have won the Lighthouse Book Awards, the Royal Palm Awards, the National Indie Excellence Awards, and the Readers Favorite Awards. He has traveled to more than thirty countries around the world and speaks four languages. Before devoting his time solely to writing and teaching, Pereda had a rich and successful international consulting career with global giant Booz Allen Hamilton, where he worked with the governments of Mexico, Venezuela, Peru and Qatar, among others.

A member of MENSA, Pereda earned his MBA from Pepperdine University in California. He earned bachelor degrees in English literature and mathematics at the University of South Florida in Tampa. He loves sports and has won many prizes competing in track and show-jumping equestrian events.

Pereda lives with his youngest daughter Sophia in Asheville, North Carolina. He teaches mathematics and English at the Asheville-Buncombe Community College.

Visit him online at www.davidpereda.com