Review of The Beekeeper's Bullet by Lance Hawvermale

Welcome to the review tour for The Beekeeper's Bullet by Lance Hawvermale. Today I'm sharing an excerpt and my thoughts on this historical fiction novel. Please be sure to follow the tour for other people's thoughts and let Lance know what you're thinking along the way. And of course, there's a great giveaway at the end! 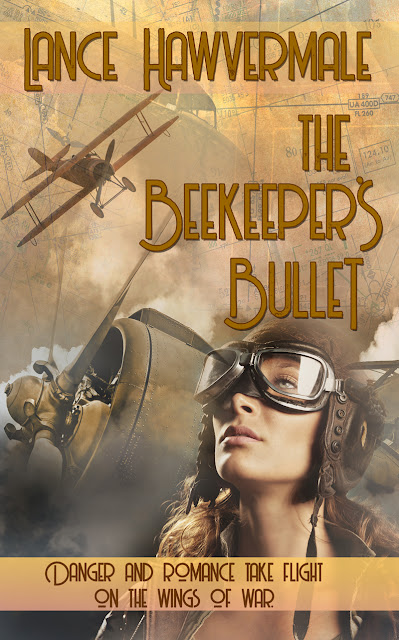 American Ellenor Jantz lives in rural Germany in 1917, the Great War raging only a few miles from where she works as a beekeeper for a wealthy loyalist. When a British airman crashes behind enemy lines, Ellenor must choose between aiding him or handing him over to the German authorities, who have just moved a squadron of flying aces into the manor house where she is staying.

Injured pilot Alec Corbin-Dawes, Royal Flying Corps, finds himself at Ellenor's mercy. Yet he is determined to make his way farther into Germany to rescue his sister within the next four days. How can he travel all those miles in time, now that his plane is downed, and still avoid capture behind enemy lines?

Something fell from the sky.

A shadow blasted across the truck, briefly barricading the sun. An instant later, a machine of wood and twanging wires flew across the truck’s hood, missing it by the breadth of a hand. Smoke coiled out behind it. The howling contraption flipped in the air, bits of it snapping free even as it dropped, and then it struck a patch of wild forget-me-nots on the side of the road, crushed them, and vanished in the tall grass beyond.

Ellenor torqued the steering wheel to the right and applied brake and clutch, her breath trapped behind her teeth. The truck came to a jarring halt, the two white brood boxes sliding in the back and dislodging a hundred dead bees. Exhaling, Ellenor looked from the window in the direction of whatever the hell it was. The war rarely reached this far from the Front; Ellenor never fell asleep with the sound of German artillery pounding French hillsides, as so many others did. Other than the occasional supply convoy from the factories in Berlin, Father’s estate and the villages nearby saw no evidence of the blood being hemorrhaged by millions a few dozen miles away. But Ellenor knew, staring from the truck’s dusty window, a part of the war had almost crushed her. Its smoke rose like a serpent from where it waited in the grass.

**My thoughts**
I'm completely fascinated by the two World Wars, so usually only read historical fiction from those eras. I admit that I know much more about WWII and the only WWI novels I really remember reading (and still reread) are All Quiet on the Western Front and Johnny Got His Gun, much deeper and intense books. So this was an interesting change of pace.

I don't usually associate planes with WWI, probably because of the stories I have focused on in the past. So I enjoyed learning a bit about the planes in this one. For some reason, I kept thinking of The English Patient, even though that took place in WWII. I think it was the descriptions of the plane and just how it was a man and a woman flying through the countryside, plus it was a British pilot.

Bees play a huge role in this book, especially in the beginning. And I believe the author is a beekeeper himself. I learned a lot more about bees and beekeeping than I had ever expected.

There are a lot of details in this book that show a tremendous amount of research had been done going into it. Some of those details surprised me and made me do a little research on my own as I was reading, just to clarify for myself and help me learn even more. I enjoyed the twist of an American living in Germany during the Great War.

Then there is the adventure aspect as Ellenor finds herself running away across the German countryside to help Alec track down his twin sister. It's a unique story twist that ended up much more entertaining and suspenseful than I had anticipated. And then there is a bit of romance thrown in, which you almost can't help but expect when two people are thrown together in such a stressful situation.

I received a complimentary copy of this book and am giving my honest and voluntary review.


Lance Hawvermale is an English professor and beekeeper who lives in Texas with three daughters, a cat, and the woman of his dreams.


Lance Hawvermale will be awarding a $10 Amazon/BN GC to a randomly drawn winner via rafflecopter during the tour.