The Perils of Autumn by Rusty Blackwood

Welcome to the book blast for The Perils of Autumn by Rusty Blackwood! Please enjoy an excerpt from this historical romantic suspense and then follow the tour for even more. Let the author know your thoughts along the way. And of course, there's a great giveaway at the end! 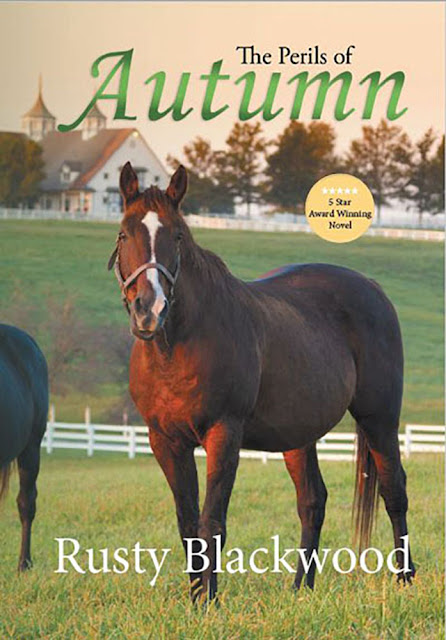 The Perils of Autumn

This page-turner, set primarily in the early 1970s, centers on a young Kentucky woman, Autumn Leeves, born in 1946 to Abigail Leeves, an unwed mother who struggles to make ends meet. By 1970, Autumn graduated nursing school and is sent on assignment by the local hospital to care for the terminally-ill wife of middle-aged English equestrian master, Cyril Landon, owner of Landon Lawns Stables, a most successful thoroughbred racing stable located just outside Lexington, Kentucky in a posh community known as The Meadows.

Duff Taylor, a world-renown jockey who is tops in his field, lives full-time above the tack room at Landon Lawns and enjoys the many benefits it brings, but he also has a dark secret surrounding an unsolved racing incident from his past that he will go to any length to protect.

Autumn arrives at Landon Manor in time to be thrown into the drama and finds herself caught in the ongoing disruption that ensues.

The doorbell of Landon Manor sounded its Call to the Post chime, alerting those inside of a new arrival to the front door as efficiently as if a racing venue’s trumpet was summoning horses to the post. It was the only residence throughout The Meadows known for such a doorbell which was most befitting to its surroundings, as well as one that was forever remembered by those departing a visit to the stately manor. Whenever it sounded, it caused Agnes Harris to shake her head in a disgruntled manner as she fought the urge to gallop toward the door as if she were a late arrival to the lineup. This morning was no different, but she paused long enough to catch her breath while massaging the small of her back before opening the huge ornate door.

“Good morning,” announced the slight young woman standing on the column-lined terrace, gripping a suitcase in her left hand, while straightening her white cap sporting her school’s insignia with her right, “I am Autumn Leeves from Saint Joseph Hospital. I’ve been dispatched to care for Mrs. Alice Landon.”

Extending her right hand, Agnes observed, “Yes, Nurse Leeves, we’ve been expecting you. I am Agnes Harris, do come in.”

Stepping into the impressive foyer, the young nurse couldn’t help but stare about in awe as she had never seen such grandeur. Lowering her suitcase to the marble floor, she took a moment to drink it all in, before she expressed, “My, this is lovely, and I must say the sound of that doorbell is most impressive. It certainly lets one know they are entering the home of an equestrian master.”

Nodding in agreement, Agnes said, “That it does. I’ve heard it multiple times, but it never ceases to elicit the need to lope for the door, ha-ha, and at my age, the loping seems to get slower every day. I’m sure you are most anxious to get settled in your room before meeting Mr. and Mrs. Landon. They are both looking forward to meeting you. You come highly recommended.”

“Well that’s nice to hear,” Autumn acknowledged, and with a smile, she continued, “I hope I can live up to the image that seems to have preceded me. After all, I’m not all that long out of nursing school and have only cared for a few patients in two separate hospitals thus far, but I am looking forward to this assignment.”

The two ascended the impressive, semi-circular staircase leading to the second floor, and proceeded in a westward direction toward the far end of the walnut paneled corridor, that of whose polished walls in between door frames were lined with striking photographs displaying numerous horses in imposing stances, a few with prominent looking jockeys sitting atop them, each proudly wearing the bluegrass green and cream silks of Landon Lawns Stables. Autumn continued along, but as she did her eyes were strangely drawn to a portrait hanging prominently on the wall opposite the door to her room. It was that of a huge black stallion and straddling him in a rather suggestive manner was a slight built, dark-haired jockey attired in Landon silks, and holding a riding crop high above his head in an arch of victory. His face held an expression as if to say he would not be trifled with, lest those doing so would feel his wrath. His brooding dark eyes secured the onlooker’s attention, boring into the camera lens as if they were smoldering embers threatening to erupt into a raging inferno upon the least amount of fanning.


The Perils of Autumn is a 2019 International Book Awards Finalist in Romance along with being a 5 star winning novel.


Top ranking romantic fiction author Rusty Blackwood, who chose her plume de nom by combining the colour of her russet hair with her husband's great, great, Scottish grandmother's maiden name, was born in St.Thomas, Ontario, Canada on October 5th, and grew up on her paternal grandfather's farm in the County of Elgin, located in the south-western portion of the province of Ontario.

She acquired her love of literature while still in elementary school where she entered her original compositions into county fairs, school contests, and whatever venue allowed participants in the writing field. She has carried that love ever since and has put it to use many times since becoming a professional writer in 2001.

From the time of youth she has loved the Arts in their many unique forms, she is a graduate with honors in Interior Decorating & Design. She spent many years on the south-western Ontario stage performing with her family's country music band: The Midnight Ramblers, followed by the country - rock - blues band: 'MIRAGE' as an accomplished vocalist, bassist, and rhythm guitarist. She now resides in the cultural city of St. Catharines, Ontario.

Rusty Blackwood will be awarding an inscribed and autographed hardcover copy of "The Perils of Autumn" to be given to a randomly drawn winner (US/Canada only) via rafflecopter during the tour.