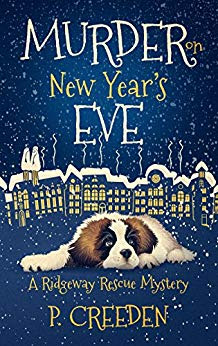 Ridgeway Rescue Mysteries can be read in 1-2 hours. Perfect for when you're waiting for an appointment or just want a fast read. Don't miss out on this quick, clean, cozy mystery that will keep you guessing until the end!

It's New Year’s Eve and 20-year-old Emma Wright has a date with her crush—well, not a real date, but she can dream! Colby Davidson, the K9 search and rescue deputy, is allowing her to accompany him while he’s on patrol at the Ridgeway Illumination Festival. Though they are just friends, she’s still hoping for a possible kiss at the end of the festivities.

When a stranger asks them to help take some pictures at the event, Emma and Colby are happy to oblige. But their assistance turns them into alibis for the man’s whereabouts while his girlfriend was killed. Most of the clues point to a robbery gone bad, but Emma doesn’t believe all of them point that way. Was it really a robbery or was it murder?

**My thoughts**
This is the first story in the Ridgeway Rescue Mysteries. I read it in less than an hour.

Emma has a rescue S. Bernard named Molly and a huge crush on Colby, the K-9 detective attached to a dog named Gabby, and who also works for her father. The foursome gets together for the annual sign lighting on New Years Eve. A man joins them and keeps asking for them to take his picture as each part of the sigh is lit up. Once midnight hits, their mysteries new friend is a murder suspect.

Emma is permitted to assist a bit in the investigation because she is the sheriff's daughter. She is very observant and is quickly able to solve the murder.

This story is shorter than I usually like to read, but it is still fun. I have a feeling the series will ramp up as it continues.
Posted by Andi at 4:46 PM