Medical thriller with a serial killer? OK! Check out an excerpt from Head Games by Eileen Dreyer. Be sure to follow the tour for even more. And then be sure to enter the great giveaway! 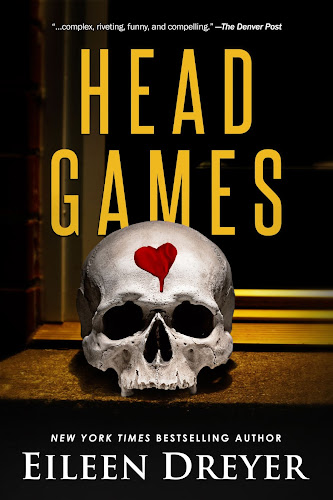 St. Louis death investigator and trauma nurse Molly Burke has seen just about everything, until gifts begin showing up on her doorstep—gifts like human eyes and painted bones—the signature of a twisted serial killer.

Complicating the dangerous situation, Molly’s 16-year-old nephew unexpectedly shows up on her doorstep, with problems of his own.

Now, Molly must balance the investigation into the mind of a monster, who’s taking her back to the worst years of her life, while launching a rescue mission for her nephew. The question is, will she survive either?

“A tensely plotted thriller that compels the reader to the last shocking page…Dreyer deftly displays her droll sense of humor while spinning a tale of taut terror…complex, riveting, funny, and compelling.” ~The Denver Post

“Nearly flawless. The dialogue is witty, yet shot through with verisimilitude. The insights into hospitals, medical examiners’ offices, police departments, and the military are stunning.” ~St. Louis Post-Dispatch
Read an excerpt:

Magnum was barking so loudly he was going to wake up the baby at the end of the block. Pointing to her nephew, Molly addressed her friend the cop. "Don't let him out of your sight. I'll be right back."

But Aunt Molly was already stalking through the kitchen, where she could just make out Magnum's massive head outside the door.

He had something. Something he dropped every time he started barking, and then picked up again, like a furry bellboy with room service.

That shouldn't have given Molly the creeps. Tonight, it did. It looked like a flower box, the kind long-stemmed roses come in.

Probably something that had been tossed over the fence from the neighboring streets. Molly's yard sided along Euclid, where an eclectic crowd frequented the trendy shops and restaurants tucked all along the Central West End. Since she'd moved home, Molly had found everything from condoms to a full-sized mannequin dressed as Fidel Castro in her backyard.

But the way Magnum played with that box made her think she had more than Castro on her hands.

Pushing the door open, Molly reached out, and Magnum obliged, dropping his prize in her hand. Slick with dog drool and ragged with careful gnaw marks, it was, indeed, a flower box. And it wasn't empty.

"Uh, Dee?" she called, suddenly even more worried about those notes she'd been getting than she had been. "Can you come in here?"

He did, which set Magnum off all over again. Molly shushed the dog and motioned the policeman over as she laid the box on her kitchen table and opened it.

She saw the glint of gold first. Nestled in layers of white tissue. Heavy and solid. But not all gold. Decorated in gold. Painted with gold hearts. Gold hearts and red crosses.

"What the hell—" Dee muttered, leaning in for a closer look as Molly pulled the last layer of tissue apart to fully reveal what lay within.

"It's a fake," Molly insisted, even though she knew better.

She didn't touch it, even though she wanted to. She didn't pick it up or tilt it over just to make sure she was right.

She didn't have to, really. After all the time she'd spent in EDs and Medical Examiners' offices, it was virtually impossible for her not to recognize a human thighbone.

A thighbone painted with the salutation "This is for Molly Burke." 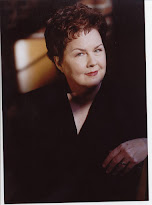 New York Times Bestselling, award-winning author Eileen Dreyer has published 40 novels and 10 short stories under her name and that of her evil twin, Kathleen Korbel in contemporary romance, paranormal romance, historical romance, romantic suspense, mystery and medical forensic suspense. A proud member of RWA's Hall of FAME, she also has numerous awards from RT BookLovers and an Anthony nomination for mystery. She is now focusing on what she calls historic romantic adventure in her DRAKE'S RAKES series. A native of St. Louis, she still lives there with her family. She has animals but refuses to subject them to the limelight.

https://www.bookbub.com/authors/eileen-dreyer
Eileen Dreyer will be awarding a $25 Amazon or B/N GC to a randomly drawn winner via rafflecopter during the tour.
a Rafflecopter giveaway
Posted by Andi at 2:09 AM
Labels: book excerpt, book promo, excerpt, giveaway, Goddess Fish, medical, serial killer, thriller