Review of The Murderous Macaron by Ana T. Drew

Welcome to the review tour for The Murderous Macaron by Ana T. Drew! Today I'm sharing with you an excerpt and my thoughts on this cozy mystery set in one of my favorite places. Be sure to follow the tour for even more! Let the author know what you think and ask her questions along the way. And best of luck in the giveaway! 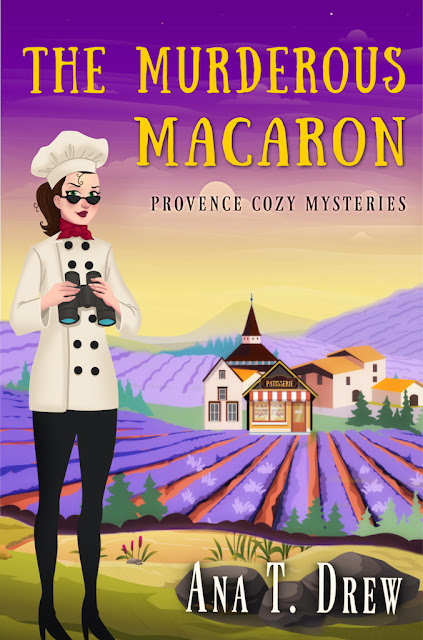 Julie has her freedom, a dream job as a pastry chef, and a corpse growing cold on her floor...

Welcome to Beldoc, a small town in the heart of Provence, imbued with lavender and fresh baked bread! You can idle around, or you can puzzle out a murder mystery.

When a man dies on her watch in her pâtisserie, newly divorced chef Julie Cavallo is dismayed. It isn’t that she’s a suspect. The local gendarmerie captain signs off the death as a natural event. A heart attack. But for a reason she won’t discuss, Julie suspects Maurice Sauve was poisoned. What’s a girl to do? She’ll ignore the risk and seek justice for Maurice on her own!

Well, not quite on her own. Julie’s eccentric grandmother, her snarky sister and her geeky sous chef are keen to help. The team’s amateurism is a challenge. But there’s also the pesky matter of no evidence, no clues, and soon, no body. The murder—if it was a murder—was planned and executed flawlessly.

Can a small-town baker solve the perfect crime?

My grandmother’s doga class—the only doga class in Beldoc and the surrounding area—is as inspiring as it is wacky. Probably more wacky than inspiring, at least to an uninitiated onlooker.

A group of people in yoga outfits are scattered over the deck, facing Rose.

Dressed in comfy yet formfitting yoga pants and a soft cotton top, my nimble grandma leads her troops across their mats to nirvana.

Boy, I hope I look like her when I’m seventy-four!

Pooches of various shapes, colors, and sizes roam from person to person and drool on the mats. Some take part in their parent’s poses. A tiny Yorkshire tries to perform a suspicious sequence involving his lower abdomen, a human shin, and some vigorous rubbing. A couple of lovebirds in the corner sniff each other’s posteriors while wagging their tails. An overweight French bulldog launches into an elaborate snore.

Most of the humans are gray-haired women, well-groomed and refined, but definitely second division compared to Rose. There are a few men in the group. One of them is Rose’s notary, Maître Serge Guichard. A widower in his late sixties with a neat little beard, he handled the purchase of the pâtisserie for me at a reduced rate. Judging by the glances he steals at Rose, I think I know why.

The group also includes a young couple in their late twenties. I had a chat with them last time I showed up before the class was over. Both adore dogs but their place is too small to adopt one. Thanks to Rose’s class, they can spend time with other people’s dogs twice a week.

Under my grandma’s guidance, the yogis and yoginis do the sun salutation while the dogis and doginis do whatever they please.

Available on Amazon
(affiliate link)
**My thoughts**
I'm a sucker for a cozy mystery that takes place in bakery. Throw in Provence as a setting, and I'm totally in. (I spent time there twice when I was in school.)
This was a really cute cozy mystery. It starts the day after a man drops dead in Julie's backing class. It has been declared a natural cause, but her instincts are telling her differently. So she goes all Jessica Fletcher and decides to investigate on her own. (I was reminded a lot of Jessica while reading this, possibly because I have been watching Murder She Wrote lately. But bits and pieces really did remind me of her as she pursued her questioning and fact-gathering.)
She gets some help from her younger sister, her patisserie employee, and her grandmother. And can I just tell you how much I adore Ruth? I mean, can we all grow up to become a woman who does doga (yoga with dogs) classes? Each of them manages to find a little piece to the puzzle, but Julie is the one who puts it all together. And the twist may surprise you.
I wanted more of the psychic element to be developed in this book, but it looks like it may come into play in later stories? It's not a cliffhanger ending, but there's definitely a sequel that is introduced at the end. I am interested in checking it out.
Thank you to the author and to Goddess Fish Promotions for fulfilling my review request. All thoughts and opinions are my own. 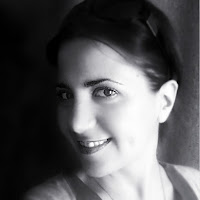 Ana T. Drew is the evil mastermind behind the recent series of murders in the fictional French town of Beldoc. When she is not writing cozy mysteries or doing mom-and-wife things, she can be found watching “The Rookie” to help her get over “Castle”. She lives in Paris but her heart is in Provence.

>>> Visit ana-drew.com for a free cookbook and a game!

Pinterest: https://www.pinterest.com/authoranadrew
Ana T. Drew will be awarding a $20 Amazon/BN GC to a randomly drawn winner via rafflecopter during the tour.
a Rafflecopter giveaway
Posted by Andi at 3:30 AM
Labels: book excerpt, book review, cozy mystery, giveaway, Goddess Fish