Read an exclusive excerpt from She's the One Who Thinks Too Much by S.R. Cronin

Welcome to the excerpt tour for She's the One Who Thinks Too Much, the first book in The War Stories of the Seven Troublesome Sisters series by S.R. Cronin. Each day of the tour, you're given an exclusive excerpt from the book, so be sure to check out the rest of the tour as well! Let the author know what you think. Best of luck entering the great giveaway at the end! 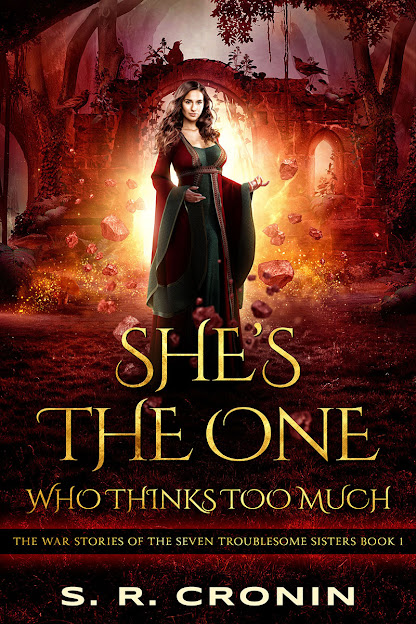 It’s the 1200’s, and the small realm of Ilari has had peace and prosperity for generations. That doesn’t mean everyone is happy, however.

Ryalgar, a spinster farm girl and the oldest of seven, has always preferred her studies to flirtation, yet even she finally meets her prince. Or so she thinks, until she discovers he’s already betrothed. Embarrassed, she flees her family’s farm to join the Velka, the mysterious women of the forest known for their magical powers and for living apart from men.

As a Velka, she develops her telekinesis and learns she has a talent for analyzing information. Both are going to come in handy. For she’s continued to meet her prince at the forest’s edge, thinking being his mistress isn’t such a bad deal. Then she learns more about his princely assignment. He’s tasked with training the army of Ilari to repel the feared Mongol horseman who’ve been moving eastward for years, killing all in their path. And, her prince is willing to sacrifice the outer farmlands where she grew up to these invaders, if he has to.

Ryalgar isn’t about to let that happen.

She’s got the Velka behind her now, as well as a multitude of university intellectuals, a family of tough farmers, and six sisters each with her own unique personality and talents.

Can Ryalgar organize all that into a resistance that will stop the Mongols? She thinks she can.
Read an exclusive excerpt:

Aliz was at the market that day, and she invited me back behind the curtain where the extra inventory was kept. She gestured for me to sit in a chair. I did, and was surprised when she lighted a stick of incense, placing it so the smoke blew directly in my face. For a moment anyway. Then it didn’t.

“Can you keep flies away from your body, too?” she asked.

“Sometimes. Definitely those small gnats that come out in early summer.”

She nodded. “It has a name. We call it oomrush. It’s mind motion and we’ll help you develop this skill.”

“Why?” I’d been told the Velka recruited woman with unusual abilities, but I could see no reason for it. What did a group of women living safely in the forest need with any of that?

“Why??” My question surprised her, and maybe amused her, too. “Do you really think we’d be allowed to live in peace, with our independent lives and the bit of wealth we’ve amassed from our work if the citizens of Ilari weren’t a little afraid of us?”

She had a point. 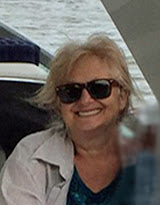 She’s made a lot of stops along the way to writing these novels. She’s lived in seven cities, visited forty-six countries, and worked as a waitress, technical writer, and geophysicist. Now she answers a hot-line. Along the way, she’s lost several cats but acquired a husband who still loves her and three kids who’ve grown up just fine, both despite how odd she is.

Book Series Blog: https://troublesome7sisters.xyz/
S.R. Cronin will be awarding a $25 Amazon or B/N GC to a randomly drawn winner via rafflecopter during the tour.
a Rafflecopter giveaway
Posted by Andi at 3:30 AM