Moon in Bastet by E.S. Danon

Welcome to the book blast tour for Moon in Bastet, a magical realism, Jewish fiction book by E.S. Danon. I have an excerpt for you to enjoy today. Then if you follow the tour, you'll find even more. Be sure to let the author know what you think along the way. Best of luck entering the great giveaway! 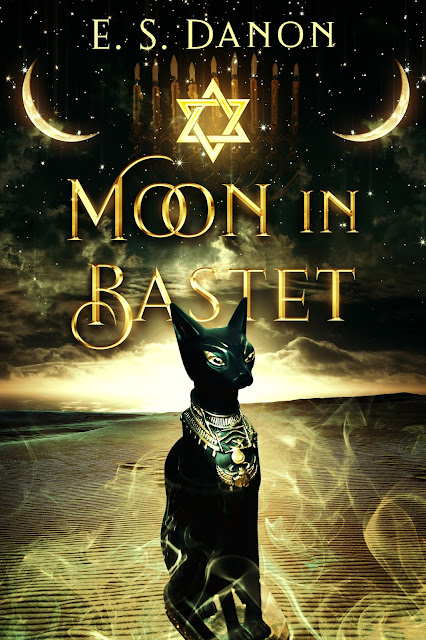 A memoir turned into thrilling fiction; Moon in Bastet is based on the life of author E. S. Danon. The story follows a fourteen-year-old girl named Eva, an orphan living in the Negev desert of Israel who is working as a custodian of Cirque Du Christianisme. Her life is controlled by a volatile drunk named Bella who favors a group of equally volatile teenage bullies over her and her own safety or sanity.

Bullied, neglected, and alone – Eva’s only friends are an odd, thirteen–year–old Sephardic boy named Jack and a small cohort of Bedouin sister-wives. On the brink of giving up on life, Eva stumbles upon a mysterious cat in the middle of the desert. Or really, did the cat stumble upon her?

Together they must fight to stay alive, win the battles thrown at them, and Eva must learn to not only lean on others but to trust in herself.

Filled with mystery, magic, and symbolism – Moon in Bastet is a story of resilience, survivorship, forgiveness, and women empowerment. This is a work filled with Jewish mysticism that can be enjoyed by people of all races, ages, and religions everywhere.
Read an excerpt:

Mist twinkles atop the desert sand as a cohort of camels take their morning promenade. A girl runs past them, chasing the rising globe of fire.

Her breath labors as she slips on a rock.

A perfect little scrape forms on her knee, but she continues onward and unfazed.

Her skin is olive tinted; her head covered by a canopy of endless brown, curly hair. On her face sit two prominent beauty marks, on either side of her mouth. She is slender and not yet fully grown, but by no means does she have a frail frame. She wears a beige, spaghetti strapped dress that is knee length and complete with a secret pocket - all of which is covered in dirt. A headband woven from plants and flowers sits around the girl’s head.

This girl is named Eva.

She sprints up another dune’s side, her dress ballooning around her as she sits suddenly with crossed legs. The mirage of the sun’s gaseous performance begins to play on the horizon; another Israeli sun rise in the Negev. Like toy soldiers, the sun’s rays advance in a medley of oranges and yellows. Pink is usually reserved for sunrises - however on this day, a rosy aura is cast around the girl as she grabs a rock and casts it towards the sun: This is how a desert girl skips rocks. Next, she takes aim at the arse of the nearest camel.

The rock misses by centimeters, causing a fuss amongst the cohort, but Eva’s almond shaped, brown eyes glisten.

“G-d! Adonai! Where are you? I see you in the colors of the sky!” Her voice echoes as her eyes drift upon the sunrise. “Why are you ignoring me like everyone else does? I feel you in the warmth of light but where are you? Why haven’t you rescued me yet?” She shivers and brings her bare feet in closer to herself. “Can you at least give me a jacket? You’re not very gentleman-like, you know… it’s really chilly this morning.”

Eva puckers her lips in defeat, and then meditates in the following silence, focusing on the warmth ricocheting from the sand and onto her goosebumps.

“Well at least my cramps are gone,” she says once her anxiety diminishes – massaging her lower stomach, happy that her most recent predicament has gone away. “But yet I still must deal with the cramp of life: being unheard and misunderstood.”

Reminded of the reason why she came to pray in the first place, Eva turns to the sky and gives a cloud a dirty look. “G-d, you have approximately twenty-four hours or I will throw rocks at every camel that I see! I can’t survive in that stupid Circus another day.” She throws a finger towards the unsuspecting cloud in the sky and pauses, thinking of a way to coax G-d into saving her.

“You know what - if you like your camels so much, then you better get me out of this place!” Shaking her head, she mumbles, “I’ll just throw rocks at each of their heads. Not like they would care. They’re already dumb… dumb camels.” She looks at a moon shaped scar on the top of her hand, given to her by one of the water-hoarding creatures several years ago.

Silence again is all that responds to Eva once she finishes speaking to herself. She slumps over, shrugs, and decides to head back to her home that sits half-a-mile away from the dunes.

Her feet slip on the sand, causing her to lift her left hand to her face. She huffs as she thinks of her favorite book; reading it gives her solace in her own solitude. Eva sighs, feeling stuck in an ocean made of sand and trapped with her own imaginary desert marlin. She’s already picked out several camels to act as the sharks.

Ironically, one of the camels spits at her as she passes – as if asking, “Where’s your rock – dumb human?”

“Rude,” she mutters in response.

Eva finds her way to a camp studded with only several architectural structures that is surrounded by seven-foot-high wall made of sand. There is only one exit and one entrance, a sky-high rectangular structure made of wood that suffices as a gate. As she skips under it, a sign that reads Cirque du Christianism sways after her.

Officially home, she is welcomed by an array of Circus tents.

Her lazy footsteps saunter past the main tent to her right, soon halting as she approaches a much smaller blue tent. Looking back towards a white tipi, she can feel her body tensing as she holds her breath before leaping forward in front of the blue tent.

I hope he doesn’t attract attention to me.

Elizabeth Danon received her B.S. in Marine Science from Stony Brook University before working as a Marine Biologist for the National Marine Fisheries Service. She traveled the U.S. Eastern Seaboard and Gulf of Mexico: collecting data aboard commercial fishing vessels and dredges.

When that didn’t pan out to be the glorified job that she expected, finding herself covered in shark snot and fish scales daily, Elizabeth became a technical writer. In her spare time, she began doing standup comedy after taking comedy bootcamp with the Armed Services Arts Partnership. At this time, she married the most wonderful man who also provides most of her joke writing material. Unfortunately, because he’s Indian he has also enabled her Maggi addiction… Like she needed that on top of her already long-standing iced coffee issues.

Her favorite show is Schitt’s Creek, as she feels a special bond to her fellow comedians - and Sephardic brethren. Growing up half-Jewish herself, Elizabeth eventually converted to being full-Jewish with Temple Israel as a student of Rabbi Panitz.

Her enriched, but complicated, heritage has been an inspiration for most of her creative writing. Being an Aries, she has always felt like a leader and has therefore integrated her feminist beliefs into her work, albeit dropping every women’s studies course that she ever elected in college.

Additionally, her writing has an unmistakable international presence. Elizabeth wanted to discover as much as she could about her Sephardic Heritage and went on Birthright, followed by her independent travels to over ten other countries… carrying nothing but a red bookbag.