Interview with Ellen W. Martin, author of the Sons of Cuba series

Welcome to the book tour for the Sons of Cuba series by Ellen W. Martin! Today you're going to get a peek into her books and then get to know her a little bit better. Follow the tour for even more! And best of luck entering that giveaway.

Relentless political turmoil streams through the veins of Cuba like lava coursing down the side of a volcano holding the Cuban people hostage to tyranny since Christopher Columbus discovered the Caribbean Island. One wonders if the country’s destiny can ever change. 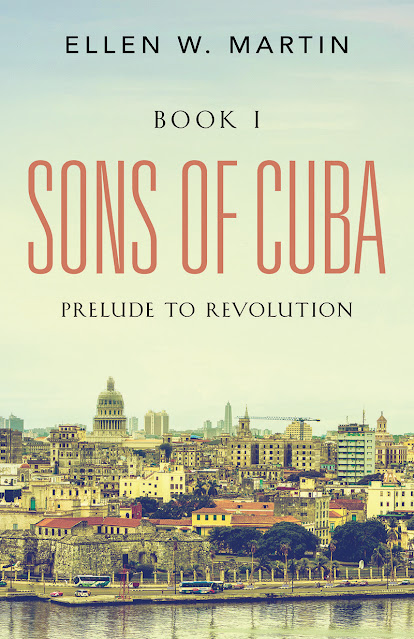 In BOOK I – SONS OF CUBA – PRELUDE TO REVOLUTION Felipe Cardena, the rebel, endures lost love, the exhilaration of victory, demoralizing disappoints, imprisonment, exile, and an assassination attempt. Nothing will stop Felipe Cardena until he achieves his ultimate goal — free Cuba from tyranny. 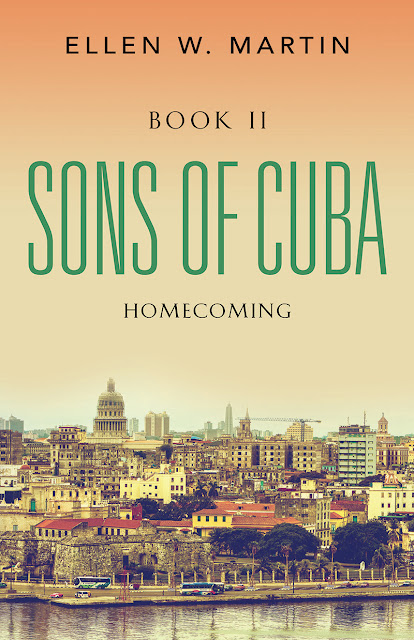 In BOOK II – SONS OF CUBA – HOMECOMING after victory is declared by the Cuban rebels, the plot shifts away from the revolution and centers on Tangi Montolio, a fiery redheaded activist who once was one of the rebel leader’s most passionate supporters. Tangi and her family become a victim and suffers under the hands of Felipe Cardena’s new leadership. The rebel now turned dictator will discover that his brief interaction with Tangi will lead to the destruction of his legacy.
Read an excerpt:

TANGI rushed over and picked up the now hysterical Andrés. Her eyes widened. Standing at the front door was that same disgusting soldier that had harassed her at the plaza; three others were behind him, rifles in hand. Once again, he leered at her. She looked down; her blouse was still open. She buttoned the top button and held Andrés close.

Ramon Miguel stepped between Tangi, Fernando, and the soldier. “What can we do for you?” He asked.

“I told you, I’m looking for Fernando Reyes. Are you he?”

Ramon stared at the soldier; his eyes narrowed. “Maybe, but tell me first why you’re here.”

The soldier waved a piece of paper in front of Ramon’s face. “This is about you turning your farm over to the government.”

Fernando pushed Ramon aside and snapped, “I’ll do no such thing. That land has been in my family for generations. Besides, what would the government want with a few meager acres?”

The soldier looked first at Ramon, and then at Fernando. “Okay, which one of you is Reyes?

“It’s the deed to your land. Sign it; sign it now without argument. If you don’t, we have a prison cell waiting for you.”

Ramon Miguel took the papers from Fernando’s trembling hands, and glanced over the legal document. He turned his back on the soldiers and pulled the old man aside. “I’m afraid you have no choice,” he whispered. “You wouldn’t survive a week in jail, and I can’t go to prison for you. Who’d take care of Tangi and the baby?”

A five-year old Cuban boy by the name of Elian Gonzalez was the inspiration for writing my SONS OF CUBA two-book series. In November 1999 this young child climbed into a seventeen foot boat with his mother and fourteen other Cubans all seeking asylum and freedom from tyranny. Before reaching shore his mother drowned and the boy was found floating on a tube off the Florida coast.

So what you might ask? Since 1959 many Cubans have risked the treacherous ninety-mile crossing in the Gulf of Mexico seeking asylum from the Fidel Castro regime. Why did this one particular incident out of thousands of risky ventures catch my attention? ANSWER: The minute little Elian stepped onto the Florida shore he became a pawn between two governments flexing their muscles. The more I read and heard about this tug of war, the more I became incensed with why so many people put themselves and their families in harm’s way to escape their beloved country Cuba. So to satisfy my curiosity I spent the next three to four years researching Cuba’s tumultuous history, all their infamous leaders and spun a wicked fictional tale, dramatizing actual events, and keeping in mind the story was solely for entertainment and meant no harm to actual people.

History cannot be changed, but whether you live in a democracy or under the iron fist of an oligarchy, everyone has the right to dream “What if.”


What character was your favorite to write?

Rafaela Zamá, the Santería priestess (Oloricha) was definitely my favorite and most fun character to write. This mysterious woman pops in and out of Felipe Cardena’s life throughout the two book series. Sometimes she is the rebel’s savior — sometimes a thorn in his side. But Rafaela is always free with her words of wisdom in an effort to control his destiny. In Book II of SONS OF CUBA she realizes Felipe Cardena is a lost cause and turns her attention to Cuba’s future generation.


On what are you currently working?

I have two projects underway – both suspense/thriller genres.

INTO THE DEVIL’S DEN – SNARED BY THEIR OWN LIES (proposed release date around the end of October 2020) weaves a tangled tale of a father caught in a twenty-year old lie he told his daughter when she was a child. He now fears he could lose her trust forever. Before he can seek forgiveness, he finds himself racing against time to save her from a jihadist’s sleeper cell – leaving a trail of murder in his wake.

This spring I completed the first draft of another suspense/thriller entitled SHATTERED LOYALTIES. This suspense/thriller is about a young female journalist, who blew up a promising career in Washington D.C. Instead of interviewing heads of state, she is now living in New Orleans writing obituaries for a local newspaper.

When the President of the United States makes a campaign stop in the Crescent City, her newspaper editor gives this ambitious journalist a second chance to redeem herself. Unprepared to face the man responsible for derailing her career, the inner demons that have tormented her soul are awakened. This young woman struggles to restrain the urge for revenge, but the ashes of her past are too strong and trigger a maelstrom of events — leading to betrayal, suspense, political intrigue, murder, but most of all, Shattered Loyalties.

After a lifetime of personal adventures, travel and escapades (a lot of risky escapades), author Ellen Martin, is living her sunset years bouncing around a tennis court or clicking away on her keyboard.

Outrage at social injustices, the thrill for suspense, and unraveling a good mystery are triggers that motivate Ellen to write memorable stories and colorful characters.

Over 30 years as a military wife, she has resided both in the Orient and in Europe where she became no stranger to social injustice and poverty. She and her family have lived in the Philippines, Japan, Italy, and the Netherlands — not to mention both U.S. coasts and Kansas in the winter. She is fascinated by real-life, colorful personalities.

On a more personal note Ellen was a flight attendant for the Charter Airline Saturn in the 1960’s. Her job was escorting United States troops in and out of Viet Nam. Her adventures in the war zone continued until she was swept away by her fighter pilot husband.

After retirement the couple’s travels included Germany, Austria, Czech Republic, Poland, Hungry, Spain, Scotland, and Ireland and topped off with a visit to Cuba.

God gifted Ellen with one “perfect” son and three grandchildren.

You wrap all this in a package and Ellen has been rewarded with an endless supply of fodder for her fiction.

In her historical fiction Book-I SONS OF CUBA–PRELUDE TO REVOLUTION she weaves an embellished tale of the most notorious and charismatic Cuban rebel in modern history. There’s a chance you might find him charming, intriguing and actually root for him in his early endeavors to free his beloved Cuba from tyranny.

However, in Book II - SONS OF CUBA – HOMECOMING, the story takes the reader from the rebel’s exile in Mexico to preparation for the revolution from the Mountains of the Sierra Maestra. This is where you will meet the fiery redheaded peasant girl, Tangi. The narrative shifts its focus from the revolution and centers around the fictional character, Tangi, and her family’s struggles, fears and disappointments in the new regime.

How the story in real life ends is no secret. But, in Book II – SONS OF CUBA – HOMECOMING, the characters and the author may just get the last word.

In 2020 Ellen’s new book INTO THE DEVIL’S DEN turns from historical events to present day reality – Terrorism — terrorism in our own backyard.

Check out her website for excerpts from her books: https://www.booksbyellen.com
Ellen W. Martin will be awarding a $25 Amazon or Barnes and Noble GC to a randomly drawn winner via rafflecopter during the tour.
a Rafflecopter giveaway
Posted by Andi at 2:28 AM
Labels: book promo, giveaway, Goddess Fish, historical fiction, interview