If you're a fan of new adult, urban fantasy, thrillers, and romance, you'll want to grab this book while it's on Kindle Countdown for just 99 cents! Enjoy the excerpt before you download your copy! 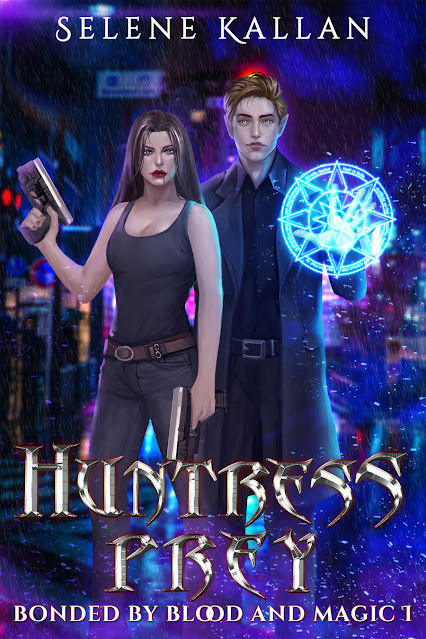 VALENTINE
After almost three centuries of running from my past, I should be used to loneliness. Being a mythological monster isn’t compatible with relationships. But the craving for company grows stronger every day, turning routine into an endless nightmare and making me wish for an end to my immortality.

The explosive encounter with a beautiful, lethal fae who knows what I am and how to destroy me reminded me of that proverb: be careful what you wish for.

I thought fate could not surprise me after almost six hundred years. And then there she is—the echo of the brave young woman I’ve heard legends about. Only she isn’t human anymore, but a vampire, the greatest enemy of my species. After a fight that could have killed us both, and an uneasy truce, I am left with burning curiosity and so is she.

But will curiosity be enough to quench her thirst for my blood and my impulse to kill her before she strikes?


The first installment of the Bonded by Blood and Magic series.

★★★★★ “A sexy fantasy thriller with a Fae-Vampire romance that will have readers swooning.”—Laurie Forest, Bestselling Author of The Black Witch Chronicles.

Fans of Underworld, From Blood and Ash, and Night Huntress will love the mix of urban fantasy and paranormal romance in HUNTRESS PREY.
******************
If you like Underworld, Huntress Prey is for you. 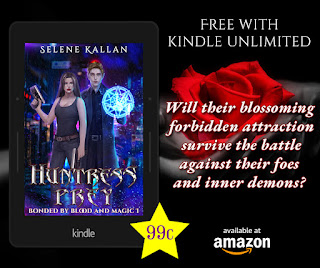 HOW NOT TO STAKE A VAMPIRESS (Huntress Prey excerpt)

I stayed as far away from his neck as I could, considering I was straddling him and pinning him to the humid forest ground. Despite the fresh air, there was no escaping his scent. A mouthwatering combination of dark chocolate and spices I couldn’t name. Warm, heady, and achingly enticing.

I felt invisible but mighty power coming from him. It felt like a burning blade aimed straight at my heart, and I couldn’t help but wonder what kind of might he possessed. Carefully, I loosened my tight leash on that force which dwelled inside me, and I feared and hated in equal measure.

“Tell me what you are, who you are,” I tried to demand, but it sounded more like a plea thanks to my fear, blood-lust-addled brain.

Like before, my hypnosis was wholly ineffective, repelled by a burning shield.

Part of me wanted to end him then and there, but I needed to know if he’d been sent to capture me.

“Only if you tell me why you’re hunting me down,” he bargained. And despite his fast heartbeat and the slightly citric tang that I was certain meant fear, his voice was steady, confident.

“I was not hunting you down,” I said again. “You are the one who broke into my apartment. If someone is the hunter here, that’s not me.”

He snorted. “Bit ironic for the people-eating, fanged creature to say that, don’t you think?”

How ever did he manage that infuriating tone while being at the mercy of a people-eating creature, as he’d said?

I arched a brow.

“I came to stop you before you tried to kill me,” he added, the duh implicit.

“I hadn’t considered killing you until you broke into my home and scared my cat,” I testily confessed.

He scoffed. “You’re more frightened than your cat ever was.”

I glared at him. He was right, of course. “This is a very bizarre conversation.”

“And one I’d rather have without you on top of me, no offense,” he drawled.

I’d calmed down enough to register the rather suggestive position, to feel the pulsing heat and raw power emanating from him in waves. To be very aware of each point of contact, even through the barriers of our clothes.

I moved at full speed, locating the stake near his feet. Weird, I’d thought it was a few yards to my right. The crystal was hot in my hand. It felt curiously alive; as if it buzzed with power.

Alexander, if that was his name, stood fast; rubbing his right wrist as he gave me a reproachful look. A swathe of dark golden hair fell across his forehead, and I had the crazy impulse to put it back in place for him, imagining how soft it would feel between my fingers.

Just in case I needed any more confirmation that I was going crazy.

He rolled his shoulders, looking regal and nonchalant despite his messy, blood-stained clothes. My blood, I remembered, quenching the instinctive impulse to bite him in revenge. The last person who had ever managed to make me bleed had died long ago. And he’d begged for his life.

“Are the pointy ears not enough of a hint?” He asked, locking those unearthly eyes with mine.

“An elf, like Legolas?” I asked, hating that I was playing his game.

He blinked. “Not precisely.”

I clenched my teeth, fighting down the instinctive hiss.

He heaved a dramatic sigh, but his gaze was reading me with sharp intensity. “Fae.”

He flashed me a look of mock offense. “Not quite.”

Was he saying the truth?

I wasn’t sure which version had it right, if the stories that claimed faeries to be tiny naughty beings with wings and magical powder or the ones that claimed they looked, well, like gorgeous humanoids with pointy ears. The latter being a pretty close description of the striking, annoying, stabby idiot standing two yards away from me.

And who cared if he was lying? He had been trying to kill me just a couple of minutes ago.

My upper lip flickered over my still lengthened fangs. He cocked a brow in a way that said ‘bring it on’.

And though that baser, violent part of me wanted to throttle him, I reined it in. I needed to know who he was and what he wanted. And I had the feeling he wanted the same from me.

“I’ve answered your question. Now, may I have my stake back?” He asked, stretching out his hand.

“Hell no. Why did you think I was hunting you down?” I demanded.

His eyes flashed. “Because your ilk enjoys killing my kind,” he replied.

I could sense his disdain when saying that.

“Because our blood is more delicious, and nutritious, naturally,” he sneered.

If that was true, if he wasn’t fooling me into lowering my guard to kill me, that was a repugnant reason.

“I would never kill someone just because they taste good,” I affirmed.

He scoffed. “Of course not. You are a bookish, animal lover geek who wouldn’t hurt a fly.”

Maybe I’d rushed into deciding not to bite him.

“And you’re just an innocent, sparkly faerie who was merely making sure I’m not a mean vampire,” I snorted. “It isn’t quite as simple as that, is it?”

He shrugged one shoulder. “Life rarely is. Now, may I have my stake back?”

My upper lip curled. “You stabbed me with it, you bastard. No, you can’t have it back.”

He smirked, tutted. “Has no one ever taught you holding grudges is bad for the soul?”

“Has no one ever taught you it’s rude to break into people’s homes and then stab them after they save your ass from becoming faery-puree?” I shot back.

He shrugged. “I took nothing from your apartment, you are stealing from me.”

“Stealing sounds so rude,” I said, barely resisting showing him my fangs.

“Let’s call it a gesture of good faith.”

He cocked a brow. “What a tough bargainer you are.”

I barely held back the desire to throttle him.

“I have questions,” I admitted. “You can’t just say such things and expect me not to have many questions.”

“An interrogation in the middle of the forest, in the dark of night done by a vampiress,” he pretended to muse. “Yeah, it’s a no from me.”

Stabbing him wasn’t the same as biting him. Maybe just a little stab.

“Perhaps tomorrow, after the class is over, we can grab a cup of coffee and have a conversation,” I suggested. That sounded reasonable and not at all as if I was planning to bite him.

His lips flickered. “Asking me on a date already? Don’t you think it is perhaps a bit soon after a murder attempt?”

“It was self-defense!” I cried.

“Tomato, tomahto,” he drawled. I growled. He rolled his eyes. “Fine, tomorrow, at the nearest coffee shop, we shall debate on the meaning of life and whatever else you like. For now, I must conclude our little dalliance.”

I locked my muscles not to kick him. He took a step back, eyes on me, and then turned, walking towards the tree line. Despite the facade of nonchalance, I could feel that he was wary. By far not as much as humans feared me once I showed them who I really was, but still.

He looked at both sides before crossing the road and heading towards the back of the building. I followed him, stashing his stake under my ex-favorite green blouse. His car was a beautiful, elegant sedan. He got inside and winked, before starting the engine and leaving me there, standing in the middle of the road wondering just what the Hell had happened.

99 cents on Amazon!
Kindle Countdown!
(affiliate link included)
These are the MCs of Huntress Prey, Valentine, and Axel. 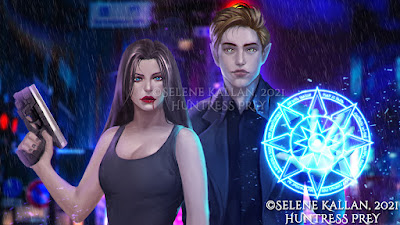 Selene Kallan is a fantasy author who daydreams about her imaginary worlds most of the time. Her obsession with vampires, and all things supernatural, has made her an avid reader. She loves writing, discovering new metal bands, and watching superhero movies. She is also feeling a little crazy while writing about herself in third person, but apparently, this is the way to go.

Subscribe to get the latest news about my books, giveaways, book reviews, music, and freebies! https://mailchi.mp/ab3a438eb628/selenekallanreaders

Instagram: https://www.instagram.com/selenekwriter/
I was compensated via Fiverr for sharing this post. I only share those books that I feel will be of interest to my readers.
Posted by Andi at 6:00 AM
Labels: 99 cents, book promo, book sale, Featured Fiverr, Kindle countdown, new adult, romance, thriller, urban fantasy