Meteors and Menorahs by Nessa Claugh

Welcome to the book tour for Meteors and Menorahs, a Jewish sci-fi from author Nessa Claugh! Today, in addition to sharing an excerpt with us, she is also telling us about her journey from writing fan fiction to original fiction. Enjoy and then download your own copy. Then go visit the rest of the tour for even more. Best of luck entering the giveaway! 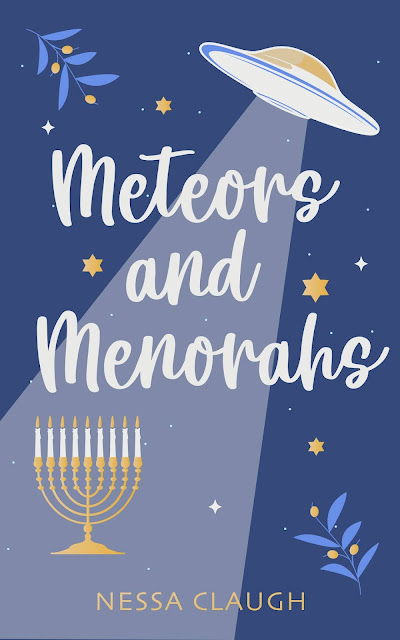 'Your dad invited your ex-boyfriend.' Already committed to going home for Hanukkah, Leah panics at her mother’s text and invites her crush to come with her. The catch? They aren’t dating. The other catch? He isn’t Jewish. He isn’t even human.

Knar has been studying the physiology of humans for years in preparation to introduce Earth to the rest of the galaxy and present them as a species that can adapt to change well. Although he believes in his mission, he’s also had his eye on his coworker Leah, and her invitation to come home with her for the holidays is just the opportunity he’s been looking for.

Going home for Hanukkah is normally the least of Leah’s worries until her mom lets it slip that her dad invited her ex-boyfriend. Desperate to keep him at arm’s length, Leah invites her handsome coworker Kenneth Knar to be a buffer against her family. Having to pretend he’s her new boyfriend doesn’t hurt, and if it annoys her parents, all the better.

He just has to find some way to tell her that he’s more than just a gentile. He’s not even from this planet. And Leah hates liars.

A man in a freshly pressed shirt and tie bustled into the kitchen, arms out. Before I could say a single word, he pulled Leah out of my arms and into a long hug. “There’s my girl!”

To her credit, Leah was out of the embrace as quickly as she was able to shove her hands up between them. “David! I wasn’t expecting you this early!”

Was that a grimace on her face?

“Well, your dad said you were here, and my last cardiology patient canceled so I figured I’d get over here.”

“And who is this?” he said, ignoring the dig.

“This is Kenneth,” Leah said, grabbing my arm. “My boyfriend.”

David looked thunderstruck. “Boyfriend? Why haven’t I heard of this boyfriend?”

“Leah, be nice,” her mother chided. The woman was short, but she still managed to move everyone with sheer presence out of the kitchen and into the living room without anyone complaining.

“I’m sorry, I haven’t had the opportunity to tell you all about my nice new very handsome boyfriend,” Leah said, running one palm up over the swell of my arm. I’d been feeling a little underdressed since the ex-boyfriend was in a nice shirt, but if I’d known it meant she’d be touching me skin to skin like this, I would have worn a tank top.

Buy Links
Books2Read * Amazon
(affiliate link included)
From writing fanfiction to writing original fiction
I’ve always been fairly introverted and writing gave me an opportunity to consider the story I wanted to tell without the pressures of an in-person audience. Trying to tell ghost stories to people I didn’t know at sleepovers and camp always fell kind of flat because I sounded unsure of myself. I had really high anxiety when I was younger and it meant that talking to people--even adults--was difficult and led to some real issues with communication. The first time I wrote a story down in fourth grade, not only was I able to come up with something coherent, I got some really encouraging feedback and pointers on how to make the next story better, and it led to more and more writing over the next few decades.

A lot of what I wrote when I was first starting out was fanfiction. Mercedes Lackey has always been pretty open about writing and reading fanfic, and knowing that I could play in her sandbox was one of the things that let me really develop as a writer. Her Valdemar universe had all these really rich characters and a world that I absolutely vibed with as a teen, and she was just pumping out these huge amounts of stories set in that world. Knowing that there was an author out there who wasn’t going to send nasty letters through her agent led to a really relaxed fanfic community, and I like to think that a lot of the really talented fanfiction authors that I was seeing on there back in the early 2000s have gone on to write original fiction. What I’m writing now might not be very similar to the high fantasy universe of Valdemar, but I’ll always remember really enjoying her flawed characters and their development over the course of a book (or three!), and it’s something I still strive for today in my own writing. 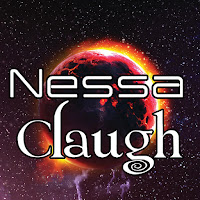 Nessa grew up thriving on trips to natural history museums and Jurassic Park. Once adulthood was upon her, it was only a matter of time before she discovered dominant aliens and shifter erotica. She enjoys titillating the Triassic and stargazing.

Nessa Claugh will be awarding a $25 Amazon or Barnes and Noble GC to a randomly drawn winner via rafflecopter during the tour.
a Rafflecopter giveaway
Posted by Andi at 11:18 AM
Labels: book excerpt, book promo, giveaway, Goddess Fish, guest post, Jewish, science fiction