A lot of us dream about what it would be like to go into space and especially to Mars. If and when that time comes, though, that doesn't mean that there aren't going to be problems along the way. John Andrew Karr has created the Mars Wars science fiction series. Find out about the books and take a sneak peek inside. Get to know the author a little better in this interview. Follow the tour for more and be sure to download your own copy. Best of luck in the giveaway! 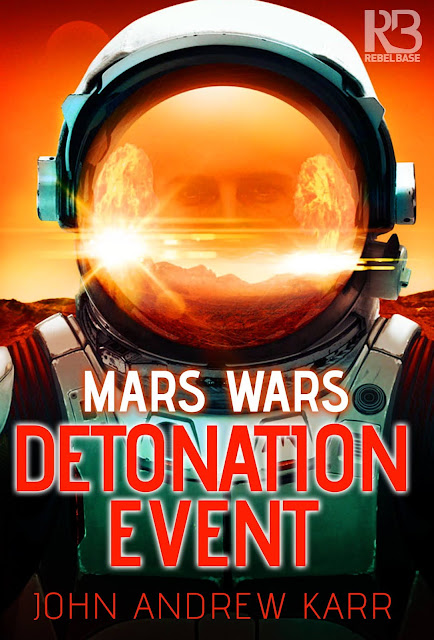 Battle-hardened Captain Ry Devans and his crew of the Mars Orbiter Station One (MOS-1) are part of a bold plan: resurrect the active molten cores of the Red Planet with synchronized thermonuclear explosions, and terraform the hell out of that iron-oxide rock for future generations. It’ll change history. So will the strands of carbon-based Martian cells that have hitched a ride on the ship.

Dr. Karen Wagner knows the microbes’ resistance to virus is incredible. It’s the unknowable that’s dicey. Her orders: blow them into space. But orders can be undermined. Two vials have been stolen and sent hurtling toward the biosphere. For Devans and Wagner, ferreting out the saboteurs on board is only the beginning. Because there are more of them back on Earth—an army of radical eco-terrorists anxious to create a New World Order with a catastrophic gift from Mars.

Now, one-hundred-and-forty-million miles away from home, Devans is feeling expendable, betrayed, a little adrift, and a lot wild-eyed. But space madness could be his salvation—and Earth’s. He has a plan. And he’ll have to be crazy to make it work.
Read an excerpt:

The barren red face of Mars grew before them.

The space shuttles of two centuries earlier had orbited Earth at roughly five miles a second. Doubling that speed, even tripling it—and in a hurry—was within easy capability of the PS-class shuttles.

Devans threw in a series of mild doglegs to make it a little interesting for Wagner. He had to admit, the youth had staying power. An hour later and Wagner hadn’t even taken a bathroom break. Two blips showed up on the main hologram of the planet below. They marked tunnel locations T1 and T2 as yellow-highlighted lines that shot straight down. Both had tiny right angles at the ends where the bombs were housed.

As they approached the space over T1, the surface camera feeds showed nothing but a mass of gray-and-red dust. Very little wind speed. It was thick but gentle, like a snow globe after its been shaken.

“Raise shields, Nuro,” Devans said. “Shannon, how about splashing our entry on the big monitor here and the feed to the crew?”

The shuttle’s shields warded off the entry heat and they entered the anemic Martian atmosphere.

“Dust storm!” Trent Wagner said over his shoulder as he leaned back and forth on the table as if shredding the galaxy’s longest wave. “This is the tail end of it!”

“How long until cleared?”

“Couple, three hours, not so bad.”

“And here I just had this thing washed. Let’s go to the dark side for now.”

The sun cut a divide on the red planet’s surface. PS-9 easily outdistanced the storm and raced over the desert surface to the dark side. The second blip beckoned them on the navigation screens. Near total darkness pushed against their vessel lights.

This was the eve of the moment they all had labored for…One last manual check and they would attempt to resurrect Mars with synchronized thermonuclear explosions at the core.

At least, that was the plan.

Buy on Amazon
(Affiliate links throughout) 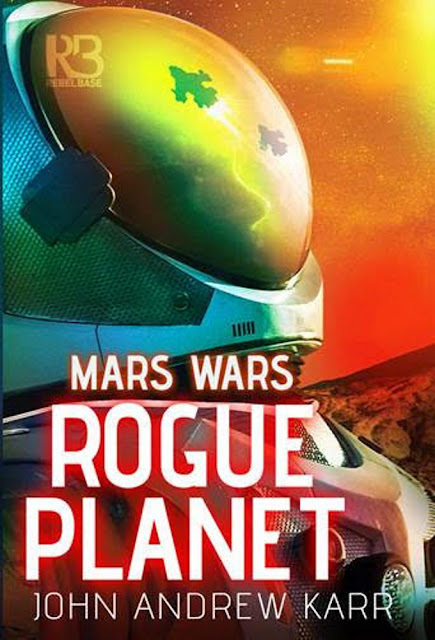 You’d think Captain Ry Devans was a hero when he jumpstarted the cores of Mars, giving the previously dormant planet a fresh start at harboring life. But he’s also the host of a life-saving alien microbe, and the most wanted man within thirty-three million miles—courtesy of the terrorist global juggernaut the Earth First Faction, and its sociopathic agent Paton Schiflet. They’re doing everything in their power to quash the organized inhabitation of space and keep the last humans under control.

Now that the EFF has dispatched its own insanely weaponized crew, Devans and his dirty-dozen team have three options: fight, surrender, or witness the extinction of the thousands of civilians repopulating space. For Devans and outlaw partner Dr. Karen Wagner, option number one is is the only way to go—but the odds against them are astronomical.

Not only are moles undermining every offensive tactic, but some on MOS-1 are exhibiting dangerously psychotic mood swings. Is it just an extreme case of space crazy? Or a new microbial gift from Mars that could kill their mission before the war with EFF even begins?
Buy on Amazon
Have you ever had an imaginary friend?

Not that I know of. Interesting to consider, though, is that fiction writers by definition have good imaginations. But at least for me, there is no mixing of unreality and reality. It either exists, or it doesn't. The fiction writer then asks, "… but what if it did exist? What would this character's life be like?"

I went for an upper body MRI recently, and found I do not care for the combination of a very tight space, immobility, and loud noises pumped into my ears. Whatever phobia that falls under, count me in.

Do you listen to music when you're writing?

I used to listen to a lot more classical and atmospheric music, but now it's mostly just quiet.

Do you ever read your stories out loud?

Not often. Maybe a challenging passage or two. One of my favorite authors is Conan creator Robert E. Howard, who supposedly read all his 'yarns' aloud. Doesn't work for me. I find I concentrate too much on pronunciation and not comprehension of the word flow that way, so I mostly read silently.

Tell us about your main character and who inspired him/her.

Ry Devans is ex-Army pilot turned civilian space jock. He embraces space adventure. Totally onboard with the mission to jump-start the Martian cores. Thought his combat days were behind him, but the anti-space politics of the Earth First Faction had other ideas. He's divorced, with an adult son active in the politics of the EFF. Devans drinks too much now and then, becomes council member of Mars Orbiter 1 after the Mars Wars begin. It isn't long before he becomes the most wanted man in the solar system.

From his home in Wilmington, North Carolina, John Andrew Karr (also John A. Karr) writes of the strange and spectacular. He is the author of a handful of independent and small press novels and novellas, and also leaves in his wake a trail of short stories.

One randomly chosen winner via rafflecopter will win a $50 Amazon/BN.com gift card. Follow the tour for more chances to win!
a Rafflecopter giveaway
Posted by Andi at 3:00 AM