Review of Sweet Sacrifice by L.D. Rose with Giveaway

Welcome to the review tour for Sweet Sacrifice by L.D. Rose, which is the ninth book in The Soul Mate Tree series, which have been featured both here and on my other blog Books to Light Your Fire. I'm sharing an excerpt and a giveaway with you today, in addition to my review of the book. If you follow the tour, you can see other excerpts and reviews, plus have more chances to enter the giveaway. Remember to leave the author your questions and comments!

Please note that affiliate links are present within this post. Should you make a purchase through one, I may earn a small commission at no additional cost to you. Also I received a complimentary copy of this book in exchange for my honest review. 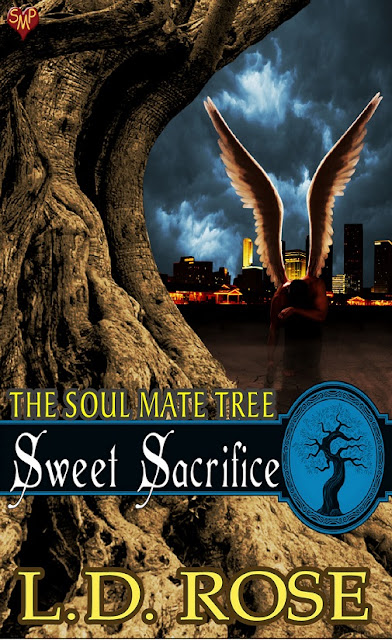 Former Navy SEAL Sebastian “Bash” Lockard died in Afghanistan after leaping on a grenade to save his comrades. Little did he know his act of heroism would grant him a ticket into Heaven’s elite army as one of the few and powerful Archangels. Struggling with his new existence, Bash still retains his human memories, leaving behind a wife he loves with all of his heart. Although he’s forbidden to see her, he can’t resist her lure, or the mortal desires he harbors for her.

As a young widow and nurse, Irene Lockard still mourns her husband two years after his untimely death. His absence is everywhere, and when her best friend weds, she hits an emotional rock bottom. As if summoned from the skies above, Sebastian appears before her, and they share an unforgettable night. But when he once again vanishes, she wonders if she’s truly gone mad with grief.

The only way Sebastian can remain with Irene is if he makes the ultimate sacrifice. But will she overcome her fear of losing him again to another war?

Her eyes snapped open, her vision blanketed by huge white feathers, before a giant wing shoved her back. Her arms flailed as she fell hard on her tailbone, the impact rattling up her spine and clacking her jaw shut.

Pain and awareness ripped into her, the veil of fantasy torn from her eyes as she gawked at the rail in front of her.

She was outside. In the dark. Ready to jump from her hotel balcony.

Her sharp intake of air scraped her ears, her heart kicking against her ribcage as she covered her gaping mouth with her hand. Holy shit. Did I sleepwalk? Was she really about to plummet to her death from fourteen stories high?

And did a huge bird just save her life?

Backpedaling across the concrete, the air cool against her thighs now that she’d nearly torn her dress in half, she hit the glass of the sliding balcony doors. Reaching up with a shaking hand, she clutched the handle and pulled herself haphazardly to her feet, yanking the door open and stumbling inside. She slammed it shut behind her, the glass rattling from the force of the blow as she flipped the lock closed. Retreating farther, she toppled onto the bed, staring at the night outside with growing horror.

She recounted her steps from when she’d arrived at the hotel. The elevator, the housekeeper, entering the room, sitting, crying, falling asleep, the river, the blood, the panic, the tree—

A loud thump hit the balcony outside, muted by the thick glass. Her bleary eyes shot to the figure standing on the ledge and she released a cross between a sob and a shriek, then stifled her mouth with a hand.

Tall, bare-chested, his suit jacket and shirt bunched in his fist as he tossed them aside. Tattoos covered his arms, shoulders, and the base of his neck. Closer now, she discerned the pattern of inked wings, pale muscles rippling, lines and cuts he’d never worn before. His dark hair fell a little longer on top, disheveled from the wind, his face still carved with gorgeous edges, but thinner, wearier. His eyes were black holes, endless, consuming. Infinite.

His knuckles rapped on the glass, the sound sending a terrified jolt into her nervous system. His eyes bore into hers, cutting through the darkness.

Reen. Her nickname rumbled from his lips, his voice still that resonant timbre she adored. God, some nights she’d pleaded to hear that sound again, just to listen to him speak one last time.

This had to be another dream. He had to be a dream. She was hallucinating.

Christ, had Phillipe spiked her drink?

“Reen.” He grasped the handle, tugged on it, his inked bicep contracting. “I know you see me.”

She couldn’t move, nailed to the bed with fear, paralyzed by disbelief. He pressed both palms flat on the glass, big hands with callused fingers, hands that had memorized every part of her body. He broke eye contact, dipping his head as he murmured, “Please, baby. Let me in.”

As if his plea granted her motor skills, Irene was suddenly on her feet, hurrying across the carpet toward him. She struggled to control her shaking hands, trembles reverberating through her entire body. It took her three tries to flip the latch, and then she backed away, recoiling, afraid of this man who looked so much like her dead lover.

He pulled the slider open in a smooth, fluid movement, the cool ocean breeze escaping into the airless hotel. Setting his sights on her, he stepped over the threshold, his presence filling the room, overwhelming her entirely. When her back hit the main door, the opportunity to flee opened up wide, but she stilled as his scent wafted into her nostrils, a blend of sandalwood and her husband.

The slider closed behind him, the finality of the sound echoing through her bones, and she couldn’t run.

Not from him. Never from him.

An almost strangled sigh escaped him and he swallowed hard, his Adam’s apple bobbing in his throat. A gut-wrenching pain glittered in his dark eyes while he drank her in, his gaze skittering over her from head to toe, as if reacquainting himself with his broken disaster of a wife.

Finally, he approached her in the dark, closing the distance between them, and she pressed harder against the door. If he held her, if he so much as touched her, she would be lost to him, squandering any semblance of sanity she’d managed to retain in these awful years without him.

Blistering tears flowed freely down her cheeks as he halted mere inches away, so close, so goddamn close his warmth radiated off his bare chest. He lifted a hand and she flinched, stopping him as if she’d slapped him. The pained expression on his face yanked a wretched sob from her throat, and she just couldn’t believe it, couldn’t believe he stood right there in front of her.

The medal, the flag, the decorated casket, the salute . . . had it all been a lie?

His finger brushed her cheek, tentative, soft, waiting for her to strike. When she didn’t, he cupped her face in his hand, his skin still rough and callused, wiping away her tears with his thumb. She leaned into his touch, unable to resist his warmth, and he framed her face with his free hand, staring into her eyes with a need so raw it stole what little breath she had left in her burning lungs.

“My God.” He whispered the words, as if he didn’t have the strength to give them voice. “I’ve missed you.”

**My thoughts**
This book stretched me a little bit outside of my normal realm of reading with the angels aspect. Bash sacrificed his life in Afghanistan and then became an angel. He is currently tortured as he is making his way out of purgatory, but really would prefer to be with his woman. His widow Irene is tortured on Earth because she has been left behind without her beloved. I can't imagine how it would feel to suffer such loss, especially soon after getting married. Each of them would give anything to be with each other again, but for Bash to make that happen would leave him with some dire consequences.

But the temptation is too strong, and the two have a passionate encounter that threatens Bash's future and confuses Irene even more. Can you imagine having your dead husband return to you in spite of what lies in store for him? I have a feeling I would be like them and would want to do whatever I could to be with the one I loved. But I can't help but worry for each of them as I am reading through the story. Bash is facing eternity in a sort of hell and Irene isn't able to move on if he can't stay with her. It will just torture her even more.

The only thing that threw me off a bit was the fighting that Bash goes through with other angels and demons along the way. It was almost out of place in the story for me, but again, I don't usually read this kind of story. Plus I was most interested in the romance part of the story, the two soul mates finding their way back to each other.

This is a short read, that I was able to zip through in under an hour. I read fast, but for those who prefer shorter stories, this is for you. This is also one for those who love soul mates and good fighting evil.

L.D. Rose is a neurotic physician by day, crazed writer by night, and all around wannabe superhero. She writes paranormal romance and urban fantasy, but she's been known to delve into horror, sci-fi, and medical suspense on occasion. L.D. Rose is a PAN member of the RWA, FF&P, NEC-RWA and CoLoNY. She currently lives in Rhode Island with her studly hubby, her hyperactive boxer, and her two devious cats.

Sign up for her newsletter for the latest on the Senary, sneak peeks, giveaways, and other fun stuff: http://eepurl.com/bKvuXD. You'll receive a free horror short story with sign-up!

Where else to find her:


L.D. Rose will be awarding a $10 Amazon GC to a randomly drawn winner via rafflecopter during the tour.