Review of Skin Deep by Michelle Hanson with Giveaway

Welcome to the book blast for Skin Deep by Michelle Hanson. This is a gripping, serial killer novel that will keep you on the edge of your seat. Enjoy an excerpt and then read my review before you purchase your own copy. Be sure to leave Michelle questions and comments as you follow the tour. There's also a great giveaway at the end!

Please note that affiliate links are present within this post. Should you make a purchase through one, I may earn a small commission at no additional cost to you. I also received a complimentary copy of this book in exchange for my honest review. 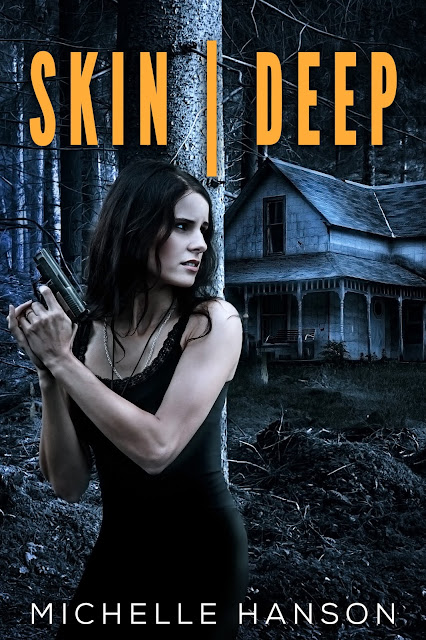 Now, as the one-year anniversary of the Collins case nears, four more women have been brutally murdered—and the killer is sending video footage of their deaths directly to Lena’s inbox.

The investigation brings Lena face-to-face with her past: the Collins case, her celebrity status, her lingering PTSD—and the first woman she ever loved, Special Agent Cait Porter, who’s just been assigned to the case.

The killer gives Lena five days to figure out who he is. But the closer she gets to finding him, the more likely it is that she’ll become his fifth victim.

THREE CEMENT WALLS covered in soot appeared on the large projection screen at the front of the room. Two archways on the back wall had been sealed off with maroon-colored bricks. A thin shadow cast along the top of the archway. Drops of water rhythmically splashed into a shallow puddle that could be heard off screen. Each drop echoed in the room, sending a chill up my spine. The hairs on the back of my neck rose as my shoulders quickly shuddered. Along the top of the back wall, between the two sealed archways, a burst of sunlight shot through a narrow glass-block window.

The rays of sun shone upon a petite female barely twenty years old. Her long blond hair was just as voluptuous as her breasts as it fell seductively over her shoulders. It sparkled each time she shifted in the aluminum chair that sat in the center of the dimly lit room. Behind the woman, camouflaged within the dull gray walls, a sharp hook hung loosely from a thick rope. It was barely noticeable at first but stuck out like pizza sauce on a white shirt once seen.

The young woman tentatively riffled through a small stack of papers she had rested on her lap. The pages crinkled around the edges, as if she had rolled and twisted them in her hands before taking a seat in front of the camera. She looked directly into the lens, her blue eyes filled with both uncertainty and ambition, then darted her eyes to the side.

“You may begin whenever you’re ready,” said an off-camera voice, deep and distorted, as if it had been electronically altered.

The young woman smiled, revealing her bold, white teeth, and looked down at the stack of papers on her lap. She cleared her throat and began.


**My thoughts**
I love a good serial killer novel, especially one that keeps me up past my bedtime. We start out with Lena's escape from Latham Collins and then dive into the events that pop up about a year later, around the anniversary of his death. New murders are popping up, and they are even creepier than the originals. These involve having a film of the actual murder being sent directly to the police station, at Lena's attention.

Lena is a good detective, which helped her to solve the case a year ago. But it has left her with a hefty case of PTSD, which is totally unsurprising. It's made her current work difficult to get through. It is costing her her relationship of two years with Abi. And the parallels between the new murders and the old ones just bring it all back up again. Not helping is the return of her ex-girlfriend Cait, serving as a special agent assigned to assist with the case. The two work well together, and it's clear that not all of the embers of their fire from 20 years ago have completely died out.

The details of the murders are quite gruesome, especially the trophies that Latham kept. If you couldn't handle watching Dexter, don't even bother with this. And I also don't recommend reading it while you're trying to eat dinner, as I often do, unless you have a strong stomach and don't mind. I managed to munch my way right through my Chicken French as the pages flipped past on my Kindle, though, because I didn't want to stop reading. I was completely engrossed with every page turn, every plot twist, every revelation of details and clues. Some pieces I was able to figure out on my own, and others escaped me until their revelation. It felt like a well-crafted, well-researched novel that is begging to be brought to life on the screen. It's also begging for the return of Lena Evans, because now I am dying to know what's next for her in life and love.

MICHELLE HANSON is a writer, director, producer, and photographer. She writes detective novels so her degree in Criminology can be put to good use. Michelle is an avid fan of the horror genre, and spends most of her free time volunteering at a local theatre. Her photography has been published in newspapers and online magazines/blogs.

Michelle is the creator, director and writer of the supernatural lesbian web series, Red Rue. She also wrote and directed Gül Girl, and the upcoming psychological thriller, Veho (Fearopoly Films).

Michelle is married, and has two dogs and three cats. She hopes to see her novels turn into a movie or television show one day (Netflix, are you listening?).

Michelle Hanson will be awarding a $20 Amazon or B/N GC to a randomly drawn winner via rafflecopter during the tour.