Review of The World Breaks Everyone by Lauren Clark with Giveaway

Welcome to the review tour for The World Breaks Everyone, the latest suspense novel from Lauren Clark. I'm sharing an excerpt and my own thoughts on the book. You can follow the tour for more people's reactions to the book and some other excerpts. It also gives you more chances to leave comments and questions for the author as you enter the giveaway! 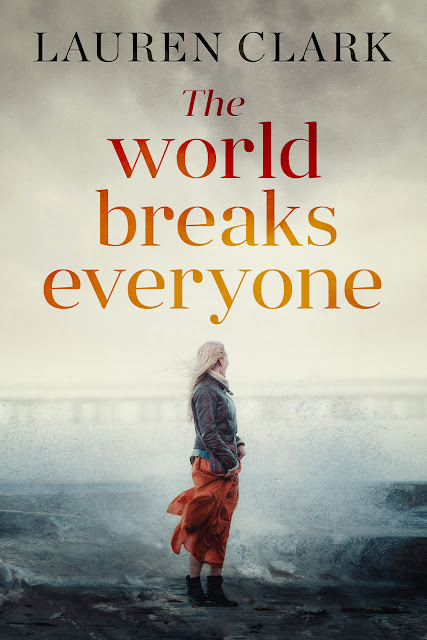 The World Breaks Everyone

Every day, I wake up certain of only three things: I am responsible for my mother’s death. My father has vanished. Someone wants me dead. I’m on the run. It’s me against the world. I cannot let it break me.

When sixteen-year-old Olivia Jacobs and her celebrity chef father are brutally attacked after his French Quarter restaurant opening, the shell-shocked Olivia finds herself on the run on the streets of New Orleans. Who wants her dead? And why?

Olivia ran a single finger along the white marble, tracing the smooth-cut edges. She shivered against her windbreaker, causing the black material to rasp and rub. The air was cool and wet, a New Orleans damp that soaked the skin and soul.

Surrounded by silence, wrapped in a lush green space dotted by mausoleums and gravestones, Olivia knelt, protected by iron gates and sharp spires that towered over her head. The glow from the sky meandered through the branches of live oaks, threading though Spanish Moss, illuminating the letters and numbers carved in the marble. Simone Larroque Jacobs. Beloved mother, daughter, and wife. 1976-2015.

It seemed, to Olivia, a cheater’s way to sum up a life. In stone and words. Chiseled for permanence. She brushed away the damp, curled leaves from the base of the monument, finding a place to nestle the spray of violets. With its candy-sweet scent, the velvet-purple petals seemed to gaze up at the heavens.

The other small white blooms lay in the crook of her arm. She brought them for three neighboring vaults, in honor of the ancestors of her family who stood silent guard around her mother. Olivia brushed away debris before resting the flowers in place at each of the gravestones. She liked to think about her relatives being there when she was gone.

“I’m leaving, Mama,” Olivia whispered, her words carried away on the breeze. There. She had said it out loud. Confessed. The secret she had harbored in her heart for the last few months. “Baja,” she paused and reached for her backpack. The pull of the zipper, metal on metal, disrupted a cluster of doves, sending them skyward.

**My thoughts**
Olivia is a young tortured soul. She blames herself for her mother Simone's death, though she really didn't cause it. But no matter what, she just can't let herself see that and just wants to get out of town. She loves her family, but doesn't particularly feel close to any of them right now. She has even tried to take her own life. So the night after her father's restaurant opening, she plans to run away with her forbidden boyfriend and leave it all behind.

Only the unexpected happens. After everyone else is gone, someone busts in and attacks her father, rendering him unconscious, while Olivia manages to escape and go on the run. Every time she thinks she finds some help, she is only betrayed or becomes suspicious of ulterior motives that are as of yet unexplained. Whom can she trust?

At the same time, Kate is trying to sort out her own feelings as she awaits news of her boyfriend Theo, who happens to be Olivia's father. Kate and Olivia actually have a lot in common, but don't yet know it. Their relationship is basically nonexistent, as they are new to each other, and Olivia is resentful of any new woman in her father's life. And as Kate is trying to figure out what happened, she is bombarded left and right by information she never knew. She also doesn't know whom she can trust.

So many secrets lie in the prominent family. Victoria, as the wealthy matriarch, and Simone's mother, is exactly what you would expect in a conniving woman determined to manipulate every aspect of her offspring's lives. For some reason, I kept going way back in time and was picturing Angela Channing from Falcon Crest back in the 1980's. And you want to think that you can trust her husband Lawrence, but just like everyone else, you just don't know if you can.

There are so many twists and turns in this plot. It really did remind me of those great '80s soaps. I would love to see this story played out on the screen.

Lauren Clark is the author of several award-winning novels, including Dancing Naked in Dixie, Stardust Summer, and Stay Tuned. She also writes suspense under the name Laura McNeill. Center of Gravity and Sister Dear have been published by HarperCollins.

Lauren Clark will be awarding a $25 Amazon/BN GC to a randomly drawn winner via rafflecopter during the tour.