Welcome to the book blast for The Three Poisons  by John Molik, "a rollicking, muscular adventure into the very mental essence of existence." Check out an excerpt before you download your copy. Follow the tour for more excerpts. And be sure to leave comments and questions for the author along the way. You'll also get more chances to enter the giveaway.

Please note that affiliate links are present within this post. Should you make a purchase with one, I may earn a small commission at no additional cost to you. 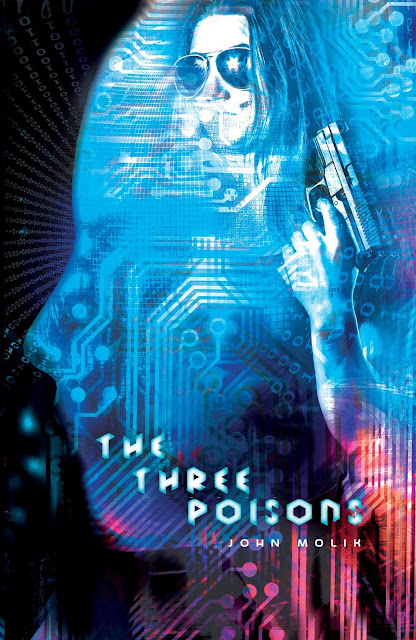 It's 2025. An evil cabal known as the Horsemen are looking to colonize space with advanced technologies that have been kept hidden from humanity. A dark faction wants to destroy life as we know it. An artificially intelligent computer must learn love to save mankind, but is there enough time?

Like a racehorse out of the gate, she charged right at the window. Before anyone even knew she was there, her body came crashing through the glass like a meteor. Shards of glass, aluminum framing, and vertical blinds blew out everywhere like a mini explosion. Taking two men out seated at the table, Aria then tumbled onto the boardroom table, ending up on her back and breathing in and out hard.

The two men appeared injured. There was shock on everyone’s face. A burly man, who was either maintenance or security, went to grab her. She pulled him down onto the table and had his arm behind his back in seconds. Pulling up hard, a few cracks were heard as he screamed in pain. The security guards in front saw the camera feed and heard the commotion, and quickly left their post with guns drawn. They busted into the room like two Labrador puppies ready to show her who was boss. Aria had her Glock out and had two bullets in each of their heads, one above each eye before they could even register what was happening. Falling to the ground with their red stream of essence pooling around them, some of the women in the group started screaming, while some men were yelling for their lives.

“OK!” She yelled in Mandarin. “Everyone calm down!” She pointed the gun at the men in suits, the directors with ties to MFC. “This way!” She looked at all of them. “Any of you pieces of shit that don’t come with us, or you try any funny stuff, you will get your heads ripped off. Do you hear me?” Her voice, combined with her fiery eyes and obvious superhuman strength and stamina, freaked everyone out. A dark gloom hung over everyone’s head like the pregnant belly of a rain-filled thundercloud.

I grew up in Rancho Palos Verdes, California, and currently reside with my wife in Christchurch, New Zealand. We have two kids, Jared, 20, and Lauren, 18.

My passion for writing began when I was a student at UC Davis and worked as a feature writer for the California Aggie newspaper. Having been nominated for a Brasler Prize (National Scholastic Press Assoc., 1986) for a feature on genetic engineering, I later found the inspiration to write again. In 2013, I began outlining my first thriller, The Fiduciary Delusion, which became the first novel in the Horsemen trilogy. I love to read techno-thrillers, science fiction, and action and suspense novels. Some of my favorite authors include: Philip K. Dick, Kurt Vonnegut, Lawrence Sanders, Robin Cook, and Clive Cussler.

My interests include science, information technology, speculative fiction, existential philosophy, health, and both Western and Eastern holistic medicine. On many occasions, I have also been witnessed strumming guitars, tickling the ivory piano keys, and writing music. In addition, I can be regularly found at the gym lifting weights, or trudging up hills, sea kayaking, and getting out and about enjoying the beautiful, wild outdoors.

John Molik is giving away a $10 Amazon/BN GC. Follow the tour for more chances to win!