Review of And Then He Was Gone by Joan Hall Hovey

Welcome to the book blast for And Then He Was Gone,  a new thriller by Joan Hall Hovey. This is the first time I have read a book of hers, and I am happy to share my review with you her today. There's also a link to an excerpt to give you a sneak peek inside. Follow the tour to find more reviews and chances to leave her comments and questions along the way. And remember to enter the giveaway!

Please note that affiliate links are present within this post. Should you make a purchase through one, I may earn a small commission to help support my websites at no additional cost to you. Also, I received a complimentary copy of this book in exchange for my honest review. 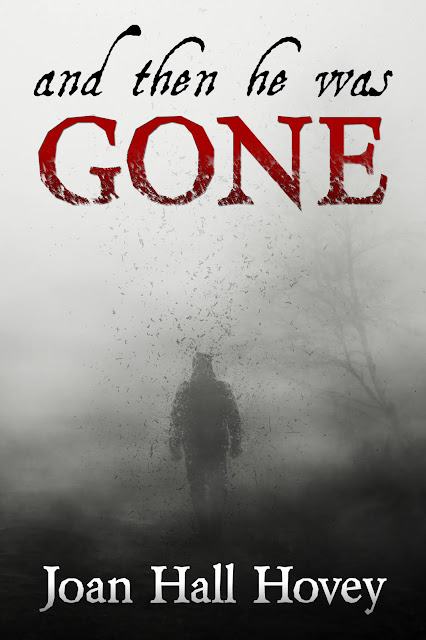 And Then He Was Gone

Julie Raynes’ husband is missing. Devastated and confused, she refuses to believe that he would leave her voluntarily, though her best friend thinks differently. However, her Aunt Alice, a psychic, tells her Adam has been murdered, and when she reveals how she knows this, any hope that Adam is still alive, dissipates.

The police also believe that Adam Raynes was murdered. And Julie is their prime suspect. Her life in ruins, Julie vows to hunt down whoever is responsible for Adam’s murder and make them pay for their crime.

In the meantime, David Gray, a young man who was pulled from a lake by a fisherman when he was 9 years old, wakens from a coma after nearly two decades. Unknown to Julie, Adam and David share a dark connection, a darkness that threatens to devour them both.

**My thoughts**
I first wanted to say that I got a kick out of some of the character names. My favorite is probably the cat named Endora, because I loved watching Bewitched. It also alludes to some small pieces of the plot. I also did a few double takes while reading about Detective Regan being on the case, as I am a big fan of Blue Bloods. And then, of course, there is the character of David Gray. The name just rolls right off the tongue and is used in full a lot throughout the story. It also happens to be the name of one of my favorite singers.

And now for the story itself. I felt like it started out really strong. I could really feel Julie's pain in not knowing where her husband is. Everyone assumes that he just left her, and she is even under suspicion for being the cause of his disappearance. She is absolutely beside herself. And she's fighting with her best friend Carol over it. Her life is just a mess.

And then she has a visit with her Aunt Alice, who is blessed with some powers with precognition. For the first time, she truly believes that Adam isn't coming back, but not by his choice. We as the readers already know what really happened to Adam, and we know who did it. But of course Julie has no idea, nor does anyone else in the story, as far as we know. So part of the fun in reading this book is seeing how the mystery unravels to the rest of the characters.

Then there is the plot line about David, Rath's brother, who had miraculously woken up from a coma after 19 years. I admit it's hard to believe that part of it, but with a story tinged with the supernatural, you have to suspend a bit of reality. We also know the truth behind what really happened to David 19 years ago to put him in that coma. The two mysteries are actually quite intertwined, only no one realizes to what extent.

And though we know all of this, there are a few surprises that pop up as the truth is slowly being revealed. I did feel like the latter half of the book moved a lot more slowly than the first half, but those twists helped to balance that out a bit.

Writing gives me a sense of achievement and satisfaction that nothing else does. (Except having my babies.) And that's not a bad analogy, if not an original one. Holding your published book in your hands, (especially that first one), running your fingers over its smooth cover, tracing your name there - is heady stuff! These days of course, knowing my readers are downloading my books onto their Kindles and iPads and Kobos, and so on is just as great. For me, a dream come true, even though it's been awhile since I wrote my first book.

I am drawn to explore the dark side of humanity, and my intention is to give the reader a roller coaster ride that will resonate long after the last word is read. I know that I am truly blessed to be permitted to work every day at what I most love and need to do. I think you appreciate it even more when you've had to go to those awful 9 to 5 jobs you hated, because the bills have to be paid. And I've had my share of them over the years -- hulling strawberries, waiting tables, grading eggs... (top that one). A couple of those jobs have left scars. I've been stalked by a psychotic customer when I was selling 'CAA'. (Canada's version of 'AAA'.) I've been chased around the desk by a so-called pillar of society while working as a secretary. But while I wouldn't want to repeat it, I wouldn't take back a single moment of any of it. All is 'grist' for the writer's mill.

The next best thing is hearing from my readers. You have been so generous in your comments, so kind to take the time in your own busy lives to write to me. Telling me that my novels kept you up all night, or that you couldn't put the book down is music to my ears, and keep me going in the dark times that come to all writers, while I find my way about in the unknown, unlit territory of that next book.

In addition to her critically award-winning suspense novels including And Then he was Gone and The Deepest Dark, Joan Hall Hovey's articles and short stories have appeared in such diverse publications as The Toronto Star, Atlantic Advocate, Seek, Home Life Magazine, Mystery Scene, The New Brunswick Reader, Fredericton Gleaner, New Freeman and Kings County Record. Her short story Dark Reunion was selected for the anthology investigating Women, Published by Simon & Pierre.

Ms. Hovey has held workshops and given talks at various schools and libraries in her area, including New Brunswick Community College, and taught a course in creative writing at the University of New Brunswick. For a number of years, she has been a tutor with Winghill School, a distance education school in Ottawa for aspiring writers.She is a member of the Writer's Federation of New Brunswick, past regional Vice-President of Crime Writers of Canada and International Thriller Writers.

Her books are available at most online book stores, including Amazon, B&N, Kobo, and more. Check out her website at http://wwwjoanhallhovey.com

She lives in Saint John, NB, in an uptown building over 100 years old, with her cat Bella. Aside from writing (and reading of course) She enjoys playing piano and spending time with her grandson. She is presently at work on her latest suspense novel.

Joan Hall Hovey will be awarding a $25 Amazon or B/N GC to a randomly drawn winner via rafflecopter during the tour.

a Rafflecopter giveaway
Posted by Andi at 1:21 AM