Ribbon of Light by Claire Yezbak Fadden with Giveaway

Welcome to the blurb blitz for Ribbon of Light by Claire Yezbak Fadden! Today I am sharing an excerpt with you, plus there is a great giveaway at the end. If you follow the tour, you can leave comments and questions for the author along the way, plus have more chances to enter the giveaway. 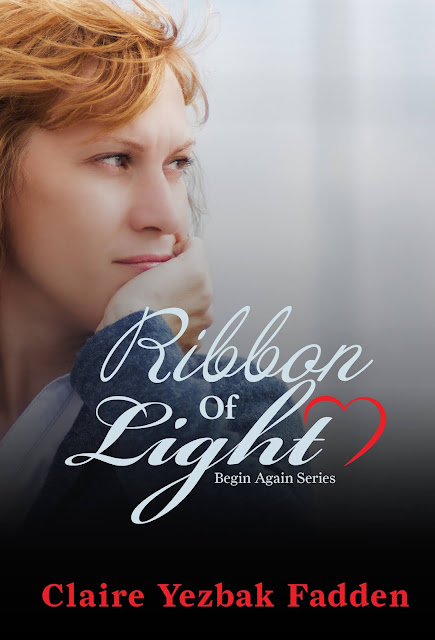 Julie Rafferty’s life-long dream is within her grasp. But just as the toy company she founded verges on becoming a multi-million-dollar enterprise, her husband abandons their marriage.

Trevor had no choice but to walk away from Julie. How else could he show his wife that the business was her priority, not him and their three children? His drastic stunt backfires though, jeopardizing the family business and seemingly pushes Julie into the arms of a younger man.

Just when Julie and Trevor find their way back to each other, a ruthless competitor escalates a bogus lawsuit. Together they plot to reclaim control of the toy company, only to uncover a shattering betrayal that puts them in unimaginable danger.

Can they overcome their dreadful mistake and reclaim the passion, trust and commitment that once drew them together? Or will the greed of an evil man irreparably destroy everything they hold dear?

Before Julie placed her purse on the desk, Leanne handed her three phone messages, two from Gary and one from a local reporter.

“Oh, and I thought you might want to read this,” Leanne handed over an article printed off the Internet. “After your meeting with Bennett Burnside, I remembered reading this from two years ago.”

The story recounted the case of a family from Georgia. The parents of a ten-year-old had won $100,000 in compensatory damages and $9.9 million in punitive damages in a lawsuit against MaxOut Toys. The suit claimed their son permanently lost partial use of his right hand after playing with BlastAway, a handheld video game manufactured by the start-up company. The article read in part:

“Because of their negligence, this young lad is unable to perform any of the normal activities a boy of ten would enjoy,” their attorney said, arguing that MaxOut management knew the dangers of overuse of their product and was required to provide consumer warnings. “Young Benji is now designated as a special needs student. On the Little League field, Benji can’t pitch, play first base, or even bat properly.”

Funny. She hadn’t seen Mort since he lost his company…until he introduced her to Bennett Burnside.

An icy surge ran down Julie’s back. She set the papers on Leanne’s desk and clenched the journalist’s phone message in her hand.

Julie recognized the name and the same byline on the patent-infringement lawsuit article.

While placing the call, Julie licked her lips, a nervous habit she had since a child, waiting for the phone to connect.

“An unnamed source on the San Marcel Narcotics Task Force claims the US attorney’s office is requesting a court order to confiscate your company files. Would you care to comment?”

Julie collapsed in her chair, her legs no longer able to support her. “What did you say?”

“Is FunWorks actually a front for money-laundering?”

“I don’t understand the question,” Julie said, her voice shaking.

“It’s the first step before the Narcotics Task Force initiates an investigation,” the reporter said in a matter-of-fact tone.

Nervous energy soared through Julie’s veins. “The Narcotics Task Force? What is this all about?”

“The task force received a tip that FunWorks launders money for drug traffickers.”

“What a ridiculous allegation.” Julie’s pulse quickened, and her hand flew to the silver crucifix dangling on a thin chain around her neck. She fingered the cross and took in a deep breath.

“For the article I’m working on. You did know you are under investigation?”

“In my experience, allegations of federal law violations are taken very seriously by the United States Attorney, especially Del Evans’s office,” Roberta said, suddenly sounding supportive. “If I were you, I’d call my attorney.”

“I have no comment about the allegation,” Julie managed to say. “I will remind you, though, that a libel suit can be very expensive. In my experience, newspaper publishers fire irresponsible writers whose sloppy work costs them money.” Julie disconnected the call and threw the cordless phone across the room.

Now those jerks had gone too far.

She retrieved her phone.

Twenty minutes later, after waiting on hold, a clerk in US Attorney Del Evans’s office informed her that Mr. Evans was unable to take her call. The clerk couldn’t say anything about the allegations, but she confirmed that contacting a lawyer would be a good idea.

“How long do these investigations take?” Julie asked.

“Hard to say,” the droning voice replied. “Every case is unique. When it’s connected to money, sometimes the IRS and the DEA get involved.”

Julie held the phone receiver near her ear for a minute or two listening to the dial tone.

The IRS and the DEA?

Burnside wanted FunWorks so much, he sicced the Feds on me. Why?

There's a special spot in Claire's heart for carousel horses – quite possibly the result of watching “Mary Poppins” 13 times as a young girl. She loves butterflies, ladybugs and confetti! Just ask anyone who's received a birthday card from her.

The mother of three lives in Orange County, California with her husband, Nick and three spoiled dogs.

Claire’s work as an award-winning journalist, humor columnist and editor has appeared in more than 100 publications across the United States, Canada and Australia. Ribbon of Light is the third novel in her Begin Again series.

Claire Yezbak Fadden will be awarding a $15 Amazon or Barnes and Noble GC to a randomly drawn winner via rafflecopter during the tour.