All the Missing Pieces by Julianna Keyes

Are you a fan of romantic suspense? Then check out this excerpt from All the Missing Pieces by J. Keyes before you download your own copy. Be sure to follow the book blast tour for even more. And then let the author know what you're thinking along the way! Best of luck entering the great giveaway! 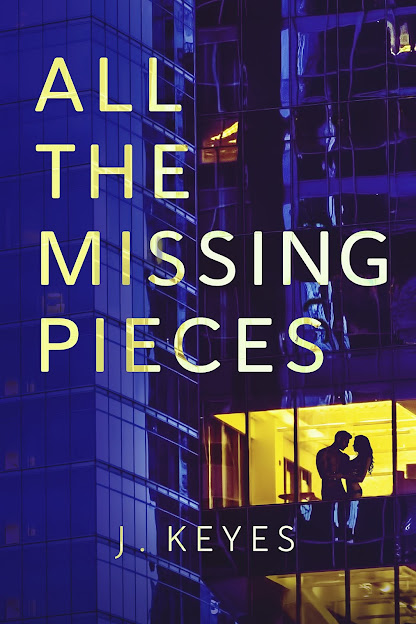 Reese Carlisle hates her life. Three years after her father’s arrest for one of the largest embezzlement schemes in history, twenty million dollars is still missing, and the world believes she knows where it is.

Two years after her brother’s death, they still think she killed him.

When the loneliness is too much, she seeks out strangers for one dark night, no questions asked. She makes up a name, puts on a disguise, and tries to forget.

One night she meets a new man. She tells him her name is Denise, she’s a dental assistant, and she loves dogs. He tells her she’s smart, she’s pretty, she’s funny. Things she hasn’t heard in too long.

Things that are too good to be true…
Read an excerpt:

My father’s appeal is coming up in three months. If it goes well, he could be walking out the front doors of the courthouse immediately after, leaving behind all that chicken ramen for Eddie B. and his prison friends. It should go well; I’ve been paying through the nose for his legal team. Not just his lawyer. His team. All of my dad’s money was confiscated when he was arrested, his assets sold to pay back some of the money he’d stolen. You’d think that would placate people, but not even close. Despite their best efforts, the FBI hasn’t been able to locate the last twenty million dollars, and the treasure hunters of the world—and more than a few lunatics—have been obsessed with it ever since. Because I’m the only Carlisle left to roam the planet, most people are convinced I have the money. Or, at the very least, if I don’t have it, I know where it is. If they knew where I lived, they’d see how stupid they are. But they can’t find me, so they’ll never know.

In the meantime, I’m funding this effort, pretending like everyone else that there’s a way out of the mess. That in three months my father’s name will be cleared and he’ll be free. That’s the tiny scrap of hope that stops me from stepping off the roof every day. Maybe, just maybe.

Because the sentencing wasn’t a surprise. My dad was guilty, after all. The first time I’d seen him after the arrest he’d told me as much. I would have sworn he was innocent until the day I died if he hadn’t whispered in my ear and made me believe.

Julianna Keyes will be awarding a a physical $25 Amazon GC, (US/Canada only) to a randomly drawn winner via rafflecopter during the tour.
a Rafflecopter giveaway
Posted by Andi at 3:30 AM