Sleeping With the Enemy by Jackie Barbosa

If you love historical romance, you need to check out the excerpt to Sleeping With the Enemy by Jackie Barbosa before you download your own copy. Follow the rest of the tour for more and then let her know what you think along the way! Plus you get bonus chances to enter the great giveaway. 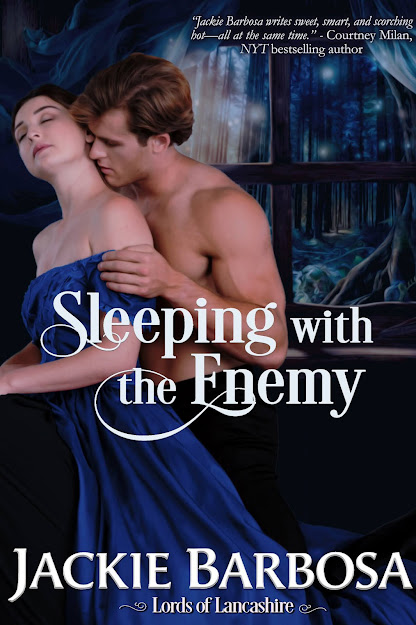 When Mrs. Laura Farnsworth discovers the blood-stained body of a man wearing the distinctive red coat of the British army, her first instinct is to let dead dogs lie. It has, after all, been just two days since the Battle of Plattsburgh, and the disposition of enemy corpses is hardly her purview. But then the man proves himself to be very much alive by grabbing her ankle and mumbling incoherently.

After almost twenty-five years in His Majesty’s service, Lieutenant Colonel Geoffrey Langston never expected to wake up in heaven, much less being tended by an angel. But when he regains consciousness in the presence of a beautiful, dark-haired woman and with no memory of how he came to be there, what else can he think? Except it’s rather odd for an angel to have an American accent.

As the long-widowed Laura nurses the wounded Geoffrey back to health, the attraction between them heats from a simmer to a boil. Bound by his oath to the British crown, Geoffrey should be working to find his way back to his regiment and from there, to England. Instead, he’s sleeping with the enemy…and thereby committing the crime of desertion if not treason. But then, who’s going to find out?

If only Geoffrey didn’t have a family back home who refuse to take “missing in action” for an answer.
Read an excerpt:

Well, that had been entirely inappropriate!

Flustered and overheated, Laura grabbed the empty wicker bread basket from the center of the heavy oak dining table and flopped into one of the nearby chairs, waving the basket in front of her face as a makeshift fan.

What on earth had come over her in there? One moment she had been engaged in the innocuous—although admittedly intimate—chore of giving a man a shave, and the next she had been seconds from lifting her skirts and riding him like a hobby horse.

Oh, very well, not quite like a hobby horse.

For heaven’s sake, she was a respectable widow with a nearly adult son, not a reckless girl in the first flush of infatuation. The last time she’d felt anything like this mad rush of desire, she had been nineteen and newly introduced to Samuel Farnsworth, the handsomest man she had ever met. Back then, she had not fully grasped the significance of the sensations that flooded her whenever she was with Samuel, just that she wanted more of them. Only after he introduced her to the pleasures of the marital bed did she appreciate how clever her body had been in recognizing her mate. Her only mate. Or so she had believed.

But now the handsomest man she had ever met slept in the bed she’d once shared with her husband, wearing nothing but a nightshirt, and she knew what she was missing. Truly understood the signals her body was sending her. 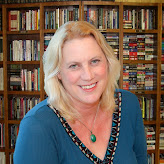 I can’t remember a time when I didn’t want to be a writer when I grew up, but there were plenty of times when I wasn’t sure I ever would be. As it turns out, it just took me about twenty years longer to grow up than I expected!

On the road to publication, I took a few detours, including a stint in academia (I hold an MA in Classics from the University of Chicago and was a recipient of a Mellon Fellowship in the Humanities) and many years as a technical writer/instructional designer for a data processing company. I still hold my day job, but my true vocation has always been writing fiction and romance in particular.

https://www.facebook.com/JackieBarbosaAuthor/
Jackie Barbosa will be awarding a $20 Amazon or B/N GC to a randomly drawn winner via rafflecopter during the tour.
a Rafflecopter giveaway
Posted by Andi at 3:30 AM
Labels: book excerpt, book promo, giveaway, Goddess Fish, historical fiction, historical romance