Enough to Make the Angels Weep by Ernesto Patino

It's time for another mystery this week at Andi's Book Reviews. Read an excerpt from Enough to Make the Angels Weep by Ernesto Patino before you download your copy. Be sure to follow the tour for even more! Best of luck entering the giveaway! 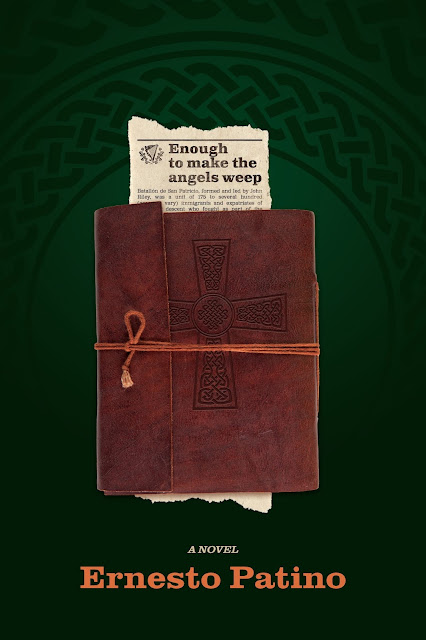 Hired to investigate the murder of an 84-year-old widow, P.I. Joe Coopersmith hits one dead end after another in his search for leads. With few clues and no suspects, he nearly gives up, until he uncovers a connection to a bizarre plot to kill the descendants of Irish soldiers who fought for Mexico during the Mexican-American War. Known as San Patricios, they belonged to the St. Patrick's Battalion, an elite Mexican unit composed mostly of Irish immigrants. When a well-preserved diary of an Irish soldier turns up, Coopersmith knows he's on the right track. He digs deeper into the plot, soon learning the identity of the man behind it and his warped motive for the cold-blooded murder of the elderly widow.

The killer sat in his car near a desert road that led toward the mountains. He lit a cigarette and glanced at his watch. The man was late. He’d give him five more minutes and then…he spotted a white SUV speeding toward him. It slowed and pulled up alongside him. The driver, a slender man wearing jeans and a tan sport coat, got out. The killer did the same and they stepped away from their vehicles.

The slender man spoke first, as though to break the ice. “They thought you might need some help. That’s why I’m here. All they want you to do is take a break, lay low for a while.”

“I still got a few things to check out, but if that’s what they want…” He shrugged. “I’ll bring you up to date on everything and then—”

“That won’t be necessary. I think I know what I need to do.”

The killer nodded. “Okay, I know the rules. I’ll step aside and you can take it from here.” He studied him for a second. The man’s expressionless face made it difficult to read.

“They want me to give you this.” The man reached into the pocket of his coat, pulled out a thick envelope and handed it to him. “A bonus, just so there’s no hard feelings.” He forced a quick smile.

The killer took the envelope and shoved it into his back pants pocket. “Well, I guess that’s it, then.” He didn’t want to hang around any longer than he had to. “If they need me, they know where to find me.” He turned to walk to his car but didn’t get far. A bullet from the man’s gun knocked him to the ground. Instinctively, he reached for his own gun and returned fire, striking the man in the chest. He fired two more times. The man dropped to his knees.

Bleeding and barely conscious, the killer got up and staggered over to where the man lay dying. He shot him in the head, then collapsed near his body.

Ernesto Patino has been a musician, soldier, schoolteacher, FBI agent and private investigator. He is a multi-genre author whose books range from Mysteries and Thrillers to Romance and Children’s books. His published works include In the Shadow of a Stranger, Web of Secrets, The Last of the Good Guys and One Last Dance. He lives in Southern Arizona with his wife Pamela with whom he shares a passion for ethnic cuisines, classical music and foreign films.

For more information about Ernesto, please visit his website at www.ernestopatino.com.

Amazon Author Page: amazon.com/author/ernestopatino
Ernesto Patino will be awarding a $30 Amazon or B/N GC to a randomly drawn winner via rafflecopter during the tour.
a Rafflecopter giveaway
Posted by Andi at 2:00 AM
Labels: book excerpt, book promo, giveaway, Goddess Fish, mystery