The Photograph (A Detective India Hargreaves Mystery) by L.E. Luttrell

Gotta love a good crime mystery, don't you agree? So check out this excerpt from The Photograph, a Detective India Hargreaves Mystery by L.E. Luttrell and then download your own copy. Be sure to leave questions and comments for the author as you follow the tour. Best of luck entering the giveaway! 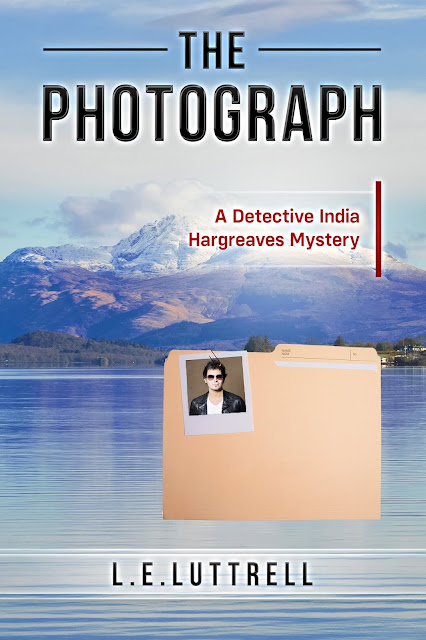 In a quiet Sydney suburb, soon-to-be-married Sonny Day sets off on his bike to catch the train to work. He never makes it to the station. After his fiancée Chrys reports him missing, DI India Hargreaves launches a low-key investigation.
Weeks later, a man’s body is found, mutilated and buried, on a nearby building site, but it’s not Sonny, and with no solid leads, both investigations stall…until a letter arrives from Sonny, claiming he’s met someone else.
Chrys insists Sonny wrote it under duress. She convinces India to investigate further, beginning with the photograph that came with the letter and ending in Scotland and the discovery of more mysterious deaths. But two questions remain unanswered. Whose body was buried on the building site? And where is Sonny Day?
Read an excerpt:

At the window, he stopped and peered in. The room was in darkness, and he wasn’t able to make out much. He’d wait a minute until his eyes adjusted.

He was just about to check it again when he felt the ladder begin to move. Looking down, he could see a man standing below him with his hands on the ladder. The man looked like Lachlan, which he thought very strange because he didn’t think Lachlan was able to walk. Perhaps he’d misunderstood. Greer had said he’d been in an accident, but she didn’t say how disabled he was. Gordon had seen the wheelchair and the stair lift being installed and made an assumption about Lachlan not being able to walk. Maybe he could hobble around.

“Aye,” the man said before pulling the ladder away from the wall and knocking it sideways.

Gordon screamed as he fell, clinging to the ladder in the hope the terrace railings would halt the fall. The ladder hit the railings, somersaulted over them and smashed him against the brick boundary wall before it bounced off and dropped into the garden, flinging him aside like a rag doll.

Before he lost consciousness, Gordon managed to turn his head and look back up to the terrace where the ladder had been leaning against the wall. He expected to see Lachlan or someone who would come to his rescue, but there was no one there. He hadn’t imagined him, had he?

L.E. Luttrell was born in Sydney, Australia and spent the first 21 years of her life there before moving to the UK. After working in publishing (in the UK) for a few years she went on to study and trained as a teacher. From the 90s she spent many years working in secondary education, although she’s also had numerous other part time jobs. A frustrated architect/builder, L.E. Luttrell has spent much of her adult life moving house and wielding various tools while renovating properties.

L.E. Luttrell currently lives in Merseyside England, but also spends time travelling between Liverpool, Wales (UK) and Australia when there is not a Covid crisis.

Website: www.lelutrell.com and sign up the the VIP list to receive a FREE BOOK
L.E. Luttrell will be awarding a $25 Amazon or B/N GC to a randomly drawn winner via rafflecopter during the tour.
a Rafflecopter giveaway
Posted by Andi at 4:00 AM
Labels: book excerpt, book promo, giveaway, Goddess Fish, mystery