I love cozy mysteries at any time of year, but Christmas makes for an extra special story! Enjoy this excerpt from Twisted Tea Christmas by Laura Childs and then follow the tour for even more. Best of luck in the giveaway! It's a fantastic basket! 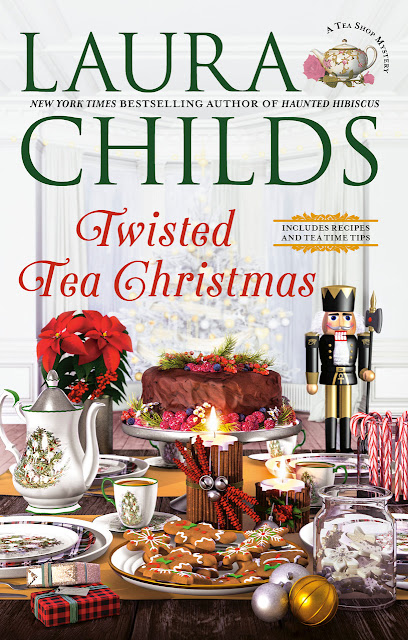 It’s the week before Christmas as tea maven Theodosia Browning and her tea sommelier, Drayton, cater a fancy Victorian Christmas party for Miss Drucilla Heyward, one of Charleston’s wealthy doyennes. But smack dab in the middle of the Fa-la-la’s, Miss Drucilla is murdered, her gold rings stolen off her fingers, and a genuine Renoir snatched off the wall.

The police come screaming in while Theodosia peers speculatively at the guests and wonders – whodunit? Urged on by Miss Drucilla’s personal assistant, Theodosia runs a shadow investigation on suspects that include wealthy neighbors, a handyman named Smokey, an unscrupulous art dealer, and the executive directors of two local charities who were in line for donations.

As Theodosia continually finds herself in hot water, she also hosts numerous holiday tea parties, stumbles upon a second dead body, and shelters a cadre of homeless dogs who come to her rescue in the surprise ending. This Tea Shop Mystery is written with pacing, plot twists, and action reminiscent of a thriller and is liberally sprinkled with the magic of Christmas.
Read an excerpt:

“What’s got you so interested, fella?” Theodosia asked as she snuck up behind Earl Grey and grabbed his collar. She was so intent at clipping on her dog’s leash that she almost didn’t see the dirty hand sticking out of the soil.

When she finally did notice, her mouth turned dry and her brain bonked out a screechy warning that yelped: No. This can’t be happening!

But seeing is believing so Theodosia stole a second look, registered the waxy appendage with dirty curled fingers, and let out a strangled cry.

“What?” He was stumbling after his own dog, frustration in his voice.

Throwing up his hands, Drayton abandoned his chase, and picked his way toward her. “What’s wrong?”

Heart in her throat, Theodosia pointed to the solitary hand that sprouted from the dank earth like some kind of unholy mushroom.

“There’s a hand sticking out of the dirt.”

“What?” Now Drayton was mumbling to himself about muddying his loafers.

Theodosia stood her ground, though her nerves were firing like rockets, warning her to back off this amateur investigation that had suddenly taken a deadly turn.

“Wait a minute, did you say hand? Human hand?” Drayton honestly thought she was making a bad joke. Trying to frighten him.

Reluctantly, Drayton took a step closer. He stared down, let out a loud gasp, and clapped a hand against his chest. “Mercy, I think I need a defibrillator!”

Laura Childs is the author of the Tea Shop Mysteries, Scrapbook Mysteries, and Cackleberry Club Mysteries. All have been on the New York Times, USA Today, and Publisher’s Weekly bestseller lists. Recently, Book Riot named her mysteries to their list of “25 of the All Time Best Cozy Mystery Series.” In her previous life Laura was CEO of her own marketing firm, authored several screenplays, and produced a reality TV show. She is married to Dr. Bob, a professor of Chinese art history, and has a Chinese Shar-Pei named Lotus.

Laura Childs will be awarding a “Tea Party in a Box,” - a special kit with a tea assortment, English shortbread, chocolates, Laura Childs’ books, and a few more goodies to a randomly drawn winner (USA ONLY) via rafflecopter during the tour.
a Rafflecopter giveaway
Posted by Andi at 4:00 AM
Labels: book excerpt, book promo, cozy mystery, giveaway, Goddess Fish