Dear historical romance fans, Bobbi Smith is back with a new one for you! Check out this excerpt from Runaway and then download your own copy! Be sure to follow the tour for even more. Best of luck in the giveaway! 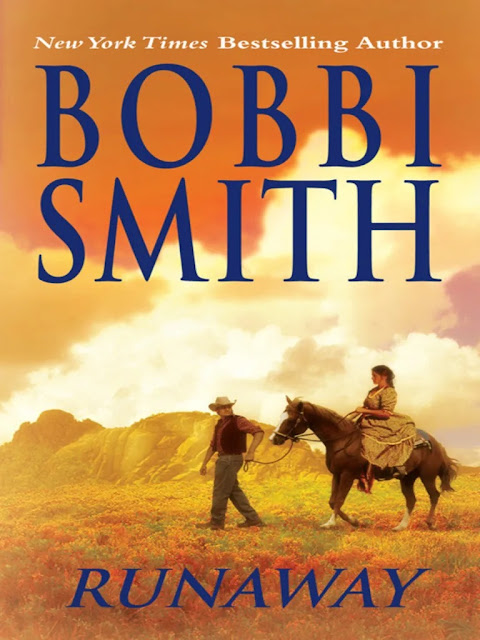 Destiny Sterling had to get away from St. Louis. Otherwise she’d never escape her stepfather’s hideous plans for her. Her only hope was to pose as a mail-order bride named Rebecca and travel to Texas to marry a rancher.

Running From the Law

Dan Cooper was as low-down a man as they came. He took pride in his gang’s rough reputation…and the string of successful robberies they’d pulled off. His ace in the hole was a remote Texas ranch where he planned to lie low if things got too hot.

Texas Ranger Lane Madison knew the Cooper gang would show up at the Circle D Ranch sooner or later. All he had to do was play the part of its new owner…and wait. What he didn’t count on was having to marry a vulnerable young beauty to keep up the role, or the inescapable attraction that made any secret between them impossible.
Read an excerpt:

Destiny awoke just as the Eastern sky began to brighten. She was nervous, and she had to admit, excited. This was her wedding day. It wasn’t what she’d always dreamed of, but it was her wedding and she wanted to look her best.

She wasted no time getting out of bed and gathering what she needed to bathe and get ready. It was early, so she didn’t wake Gertrude. She would wake her when she was finished.

All was quiet as Destiny made her way to the kitchen. Without thought, she went to the washroom door and opened it.

Lane hadn’t worried about heating up water for his bath. He’d taken the time to shave and then had filled the tub with cold water and made short order of scrubbing himself clean. He had just stood up and grabbed his towel to start drying off when the door opened unexpectedly and he found himself face-to-face with his intended.

“Oh, my—!” Destiny froze in the doorway, shocked by her first-ever glimpse of a naked man. She remained unmoving, staring at the magnificent specimen of manhood standing before her. She took it all in—his broad-shouldered physique, his hard-muscled, tanned chest and powerful arms, still shimmering with the glaze of water he had yet to dry off, his lean waist and… Heat burned her cheeks.

Lane was as shocked to see her as she was to see him. Embarrassed to be standing before her so unclad, he reacted quickly, wrapping the towel around his waist.

Lane had cautioned himself ever since he’d come to the ranch to be on guard every minute. He’d warned himself to constantly be on the lookout for trouble. He’d never thought trouble would come in the form of this beautiful innocent walking in on him just as he’d finished his bath.

“I-um-I didn’t know you were in here.” Realizing how ridiculous she must look standing there blushing, she forced her gaze to the ground. “I’ll wait outside.”

She backed out and closed the door. As she glanced at the closed door again, she had to smile to herself as a vision of him standing there naked before her played in her mind. He was a handsome man, there was no denying that.

Available on Amazon
(Affiliate link included)
About the author:

http://www.Bobbismithauthor.com
Bobbi Smith will be awarding a $10 Amazon or B/N GC to a randomly drawn winner via rafflecopter during the tour.
a Rafflecopter giveaway
Posted by Andi at 2:30 AM