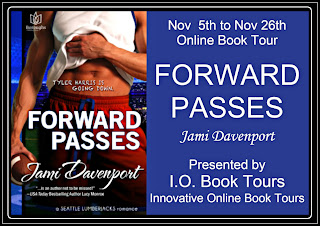 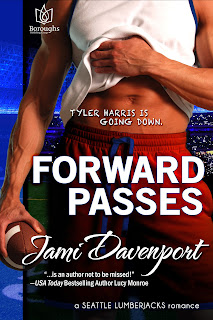 Quarterback Tyler Harris is about to find the woman who can get past his defensive line and reach his heart.

With two championships in as many years, superstar Tyler Harris is the best quarterback in the league. Gorgeous and rich, he’s at the top of his game. But everyone’s looking to take him down. There’s a building media frenzy around an unfortunate accident, and the only safe place seems a rundown mansion deep in the San Juans and owned by his late great uncle. There, Tyler gets sacked by the sassy redhead next door. It’s more alive than he’s felt in years.

Lavender Mead has a good reason to dislike jocks, namely an absentee father who deserted the family to coach college football. Maybe that explains her penchant for bad boys who play ball for a living and break hearts for a hobby. Her new neighbor seems just the type. Yet, something is different about Tyler, and sometimes love requires a Hail Mary. You draw back your arm, pray…and give it all up to fate. And sometimes you win your ring.

Check out the first chapter:

A man about to make pro-football history should be a lot more excited about it.

Like a well-programmed robot, Tyler Harris zeroed in on his receiver, instinctively calculated the distance, and lofted the ball into the air. The second the football left his hands he knew it’d be a touchdown catch.

His cousin and the Seattle Lumberjacks top wide receiver, Derek Ramsey, blazed into the end zone, spun around at the exact right moment, and caught the ball.

Ty waited for the smugness, the confidence, the satisfaction to surge through him. He waited for the greatest natural high on earth to engulf him, a high better than the best sex, and that was pretty damn, fucking good.

Two more minutes to glory. The defense took the field and held the Bruins. The clock ticked off the last seconds until the scoreboard displayed: 00:00.

The stands erupted. Confetti blinded Tyler in a snowstorm of red, white, and blue. The stuff swirled through the air and stuck to his sweat-soaked uniform. Teammates slapped his back. Coaches hugged him. The roar of the fans deafened him. Sportscasters crammed microphones in his face and barked questions at him. Rabid reporters yanked on his Number Eleven jersey and fought for his attention.

He stood frozen in place, staring at the scoreboard. He felt more like a shell-shocked soldier than a conquering field general who’d led his troops to victory in the final battle and won the war.

Except he wasn’t a general. He was no fucking hero. He’d never risked his life to save others. He’d never tramped through the desert or the jungle not knowing if his next step would be his last. He’d never sacrificed so others could have a better life or even have a life. He was just a guy gifted with an athletic body and a no-quit attitude. He didn’t deserve this: the adulation, the money, the fame, none of it.

But since when did he give a shit if it was deserved or not?

What the fuck was wrong with him?

Every football player lived for this moment from the first second he gripped a football in his hands. It should’ve been the happiest time of his life, a defining moment in a career of defining moments; two Super Bowls under his belt and a sure MVP of the game. He was a future Hall-of-Famer with a lot of gas left in his tank, still in his prime, not yet thirty years old. The press touted him as the hottest QB in the league.

Nowhere to go from here but—

Nothing had been the same since Ryan died. Try as he might, he couldn’t find his passion for the game, for life, for anything. Hell, not even for sex.

Like a disembodied spirit, he observed the scene, detached and way too fucking melancholy in the midst of the celebratory mayhem engulfing him. Jostled around by the sea of humanity, he barely felt them. He stood in the middle of the crowd, numb, apathetic, and alone. The emptiness smothered him, gnawed at his gut, consumed him.

Regardless of his apathy, he wouldn’t rain on his teammates’ parade.

Forcing a grin he didn’t feel and adopting his cocky façade, he faced the television cameras and gave them what they’d come to expect from him, an arrogant, yet entertaining, recap of his performance. Then he stood on the podium, and made one of his typical  fist-pumping speeches laced with humor. After which he did every post-game interview with his usual brash panache. No one noticed his mechanical movements or the dead smile.

Was this all there was?

What had happened to his legendary enthusiasm for the game, his penchant for living life on the edge? What happened to him? He’d lost himself somewhere between college jock and superstar athlete, yet it hadn’t mattered before. He’d lived in blissful ignorance until that fateful night when Ryan died of cancer.

If you stripped away all the hype and his public image, he didn’t have a fucking clue who lived underneath.

All this deep shit rattling around in his brain was way too much introspection for a dumb jock. He shook off this momentary lapse into deep thought, took a deep breath, and squared his shoulders. In a week, he’d start the relentless pursuit of winning all over again because losing, for Tyler, had never been an option.

Glancing at his watch, he followed his teammates out of the locker room via a back door, down the long hallway leading to buses waiting to take them to the airport. A couple hours and a few glasses of champagne later the team plane touched down in Seattle. Security hustled them past the large crowds to waiting limos.

Waving and grinning, he acknowledged the hordes of fans crammed into every spare inch of terminal space. He paused and breathed in the crisp Seattle air. His teammates shouted to each other, planning parties which would last well into the morning.

Cass, his long-time fiancée and even longer-time girlfriend, would expect to attend every one of them. She’d already texted him with her location at a teammate’s home on Lake Washington. The Vegas line against them ever getting married had once topped out at fifty-to-one and dipped to fifteen-to-one after he’d set a date for two weeks from today.

Claustrophobia set in, smothering him. He felt trapped, trapped in a career he no longer had a hunger for. His self-created, bad-boy image pigeonholed him in a role he wasn’t sure he wanted to play. His upcoming wedding in two weeks weighted him down with doubt.

He needed to escape, clear his head, gain some clarity.

Tyler slid behind the wheel of his sports car and accelerated out of the underground parking garage. His wheels spun on the rain-slickened streets as he turned a corner too quickly. Instead of heading toward I-5 and Mercer Island for a night of celebration, he turned in the opposite direction, dodging in and out of cars on the four-lane street. The light ahead turned yellow, Tyler punched the gas.

And slammed right into the back of a police car.

This book was hotter than 50 Shades, for those who like to read steamy sex scenes. This book even has a real plot to it. Lavender and Tyler claim to hate each other, despite their sexual animal attraction. All of that physical contact just makes their lives intertwine as they end up saving each other in the long run. You pretty much know what is going to happen as soon as you start reading, but it is still fun to take the journey with them.


Quote:
JAMI DAVENPORT
“…is an author not to be missed!”
—USA Today Bestselling Author Lucy Monroe

There are two things I've always wanted to do since I was a young child: to write books and to ride horses. The riding I've been doing for years. Until recently, I only dabbled in writing.

I completed my first story at the age of five. I titled it "Wildfire" (about a horse, of course) and illustrated it myself. I still have the book stowed away in the attic somewhere.

I've written stories all of my life. They were my secret garden, my escape from the realities of the world. I never shared them with anyone. I'd hide them away and bring them out when the mood struck me.

I frequented several fan fiction sites on the Internet. As I was reading those stories, I thought I can do that. Four years ago, I posted my first two chapters on a fan fiction site. My hands shook. My stomach lurched. NEVER had I let anyone read my stories before. What if my writing was garbage? What if everyone hated it? It was a soul-baring moment. Fortunately, they loved it. It became quite popular. Several people who'd befriended me on that fan fic site encouraged me to pursue my writing on a more professional level.
Being a devoted reader of romance and an advocate of happy endings, it was only natural to choose romance as my focus. I joined the Romance Writers of America, and the Olympia RWA chapter.

Six months and 105,000 words later, I finished my first manuscript, The Dance. Named after Garth Brooks' popular song, the original ending wasn't happily ever after, but I quickly changed that small detail. I started my second single title on Thanksgiving Day and pushed myself to see how long it would take me to finish it. I finished it the middle of February and was very proud of myself for being so fast.

To date, I've published four novels and two short stories in an anthology.

A few years ago, I married a wonderful man. You can bet my Green Beret turned Plumber will be an inspiration for a future book. In my spare time, I show the above-mentioned Hanoverian mare, in dressage. I'm also a rabid Seattle Seahawks and Mariners fan through thick and thin. Lately, I've developed an interest in gardening.

An avid boater, I've spent countless hours in Washington State's San Juan Islands, the most beautiful place on earth, and the setting for "Who's" and "The Dance." You'll see more books in the future set on these islands. My banner and several other pictures on this site were taken in that area.