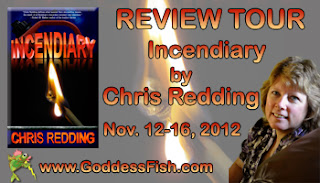 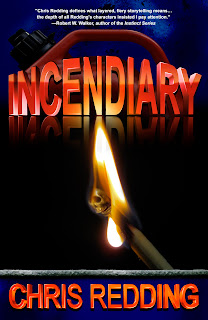 What if your past comes back to haunt you?

Chelsea James, captain of the Biggin Hill First Aid Squad, has had ten years to mend a broken heart and forget about the man who'd left her hurt and bewildered. Ten years to get her life on track. But fate has other plans.

Fire Inspector Jake Campbell, back in town after a decade, investigates a string of arsons, only to discover they are connected to the same arsons he'd been accused of long ago. Now his past has come back to haunt him, and Chelsea is part of that past.

Together, Chelsea and Jake must join forces to defeat their mutual enemy. Only then can they hope to rekindle the flames of passion. But before they can do that, Chelsea must learn to trust again. Their lives could depend on it.

The electricity of an impending storm raised the hair on Chelsea James's arms. Barefoot, she stood on the wide front porch and watched the trees blow almost in half.

Her dead sister's voice played in her mind.

"It's like nature has to violently clean up," Morgan would say as they stood in this very spot.

They both loved storms. The power of nature impressed Chelsea. Morgan concentrated on the aftermath. Odd that she never thought of the aftermath of her own actions.

"How so?" Chelsea would ask her older-by-a-few-minutes sister.

Morgan's eyes would be wide. "Because a storm gives the trees a haircut, gets rid of the ones that are weak. And on top of that, the rain helps the ones that do survive."

But this storm didn't bring with it the same renewal. Somewhere deep inside her, Chelsea knew this storm was different. This storm could bring destruction— or worse—this storm might not bring the wanted rain for those trees that survived.

She sighed. Right now she missed her sister more than anything.

Chelsea's firehouse pager went off. "Unit 37, you have a fully involved structure fire on Briar Lane."

As Captain of Biggin Hill First Aid Squad, she had certain duties. But she was also a firefighter and sometimes that took precedence. The shakiness of the dispatcher's voice told her this fire could be big.

So tonight she'd be a firefighter.

Merriam-Webster defines "incendiary" as an arsonist, a substance used to start fires, or an agitator who likes to begin quarrels. This book has all three within its characters. Some of them are accurately labeled, while others are hiding their true "incendiary" nature. The guilty parties are hinted at through the story. You have to pay attention to find out who really carries which role.

In addition to the various incendiaries in the story is a lot of heat. There is heat between Chelsea and her brother Brad, as they almost never see eye-to-eye. There is a strong spark between Chelsea and her ex-boyfriend Jake, as they try to reconcile their past. Brad and Jake have a slow flame burning as they have battled for years, despite formerly being best friends. The town threatens to explode as these fires keep being set and as a mysterious party tries to sabotage Chelsea's volunteer operation. The stakes are hot as people are murdered and others are being framed.

The backstory is revealed slowly as current events unfold. You're not sure about the antagonist's true identity for at least the first half of the book, though you may start to suspect. It's like a box of jigsaw puzzle pieces has been upended. You get small areas put together here and there, but it takes a while before the picture is complete. 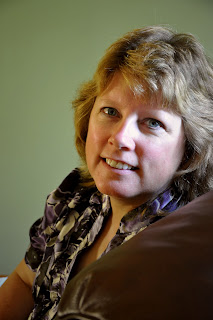 Chris Redding lives in New Jersey with her one husband, two kids, one dog, and three rabbits. When she isn't writing she's chauffeuring her two boys to activities and working per diem in her local hospital.

Chris will be awarding a framed picture of the wrought iron bridge mentioned in the book to a randomly drawn commenter during the tour. Follow the tour for more chances to win!
Posted by Andi at 3:30 AM
Labels: giveaway, Goddess Fish, romance