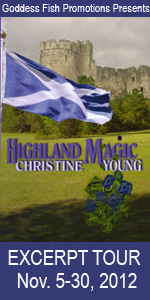 Welcome to the Excerpt Tour for Highland Magic by Christine Young, hosted by Goddess Fish tours. Check out an excerpt below and then follow the rest of the tour for even more!
﻿ 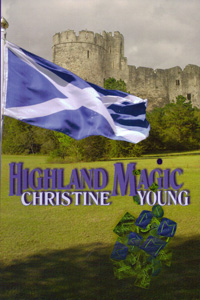 Throughout the Highlands she is known as Keely, the witch woman. She is a great healer-a woman whose dreams come true. Ian MacPherson is a man who puts honor, loyalty and duty above everything. Their lives are entwined when Ian is sent by the Scottish King to bring Keely to trial for witchcraft. He is attacked and left for dead, but Keely rescues him. When he wakes, he discovers he has no memory. As he remembers his lost past, Ian finds that his need to protect the woman who has saved his life eclipses his duty to his king and country., He is a man torn between honor and duty to his country and the woman he loves.


"The runes have said otherwise. You have always told me they are my heart and I must heed them, bow to their power. I am afraid, though. I understand there is much uncertainty in the land. I ken that James searches for me, calls me witch woman and accuses me of treason. And yet--" She broke off suddenly, unable to form the words which would hurt Whipple deeply. She would set her course with Ian even though she understood he might well be on the King's mission.

Keely did not understand Whipple and this new edict. He'd been gone for days and now he returned, commanding her to not wed Ian. "He wanted to wed me this night. He says he can protect me if we are married."

"Danger abounds in these hills. He is one of James' men. I did not wish to frighten ye, but if ye are caught, they will condemn ye as a witch and he will not raise a hand in your defense."

"They have already condemned me. Ian will keep me safe. He has been honest with me. He has explained all that he remembers."

"I cannot let ye do this," Whipple snarled, his voice raspy with unspoken emotion. "You cannot stop me. Nor could you stop Ian." She was more than aware of Whipple's condition. He was powerless and yet he seemed to rise above his handicap. His shoulders squared and his nostrils flared. His anger was something she had rarely seen.

"Have ye lost all sense? He does not have your welfare in mind. He will hand ye over to your enemies. Have ye not heard a word of what I have said? He is the King's man." Both arms and his cane were raised skyward as if he meant to conjure lightning bolts. 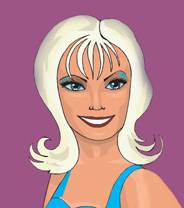 Born in Medford, Oregon, novelist Christine Young has lived in Oregon all of her life. After graduating from Oregon State University with a BS in science, she spent another year at Southern Oregon State University working on her teaching certificate, and a few years later received her Master's degree in secondary education and counseling. Now the long, hot days of summer provide the perfect setting for creating romance. She sold her first book, Dakota's Bride, the summer of 1998 and her second book, My Angel to Kensington. Her teaching and writing careers have intertwined with raising three children. Christine's newest venture is the creation of Rogue Phoenix Press. Christine is the founder, editor and co-owner with her husband. They live in Salem, Oregon.