"10 Things I Learned from NaNoWriMo" Guest Post by Jenna Harte

Welcome to the Virtual Book Tour for Deadly Valentine by Jenna Harte! I have invited her to take over the blog for a little while. Enjoy and thanks for stopping by!

For the last six years I've attempted to do write 50,000 words in 30 days as part of National Novel Writing Month (NaNoWriMo). Only once, have I reached the 50,000 goal, which would seem like a colossal failure, but even in the years I didn't meet the goal, I achieved a good head start on a book. Here's what I've learned about writing from NaNoWriMo.

1. Get the ideas down first; flesh, tweak and fix later. The challenge of NaNoWriMo is to write for quantity even when the words suck. Yes, you'll have a poorly written first draft, but editing is much easier than writing.
2. Sometimes you've got to go with the flow. NaNoWriMo writers are allowed to plot before the start of November as long as they don't write any of the story. I always start with a plot idea, but usually by day three or four, I'm getting stuck on what do to with the story. In many cases I've written the beginning and the end, but have the whole middle in which I don't know what to do. But the act of writing can bring forth ideas that I'd never consider without the pressure of hitting a number count and deadline.

3. Writing everyday creates a habit. Many authors start out by writing when they have time, which may be only a few days a week or month. The problem with that is you don't have momentum and it takes a long time to finish anything. Fifty-thousand words seems like a lot, but it's only 1,667 words a day (after 30 days you'd actually have 50,010 words). If you know what you want to say, it can be done in an hour. If not, it may take two hours. As long as you can stay on pace, 1,667 words are doable. Of course, if you miss a day or two, writing over 3,000 or 5,000 words in a day can be hard.

4. Writing is like exercise, it's most satisfying when it's done. Every writer berates herself for not getting any writing done that day or missing a deadline. If you stay on pace, write every day and hit your mark, it's a thrilling achievement.
About: Jenna Harte is a hopeless romantic who believes in love ever after. She's the author of Deadly Valentine, a romantic mystery involving murder, chocolate and couture lingerie. Check out Jenna's chocolate recipes, as well as published and upcoming works at her website http://www.jennaharte.com. 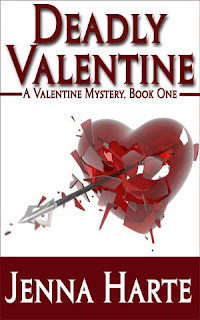 Tess Madison walked away from her two-timing fiancé, a multi-million dollar trust fund and a cushy corporate law job to pursue the single life indulging in chocolate and fancy French underwear. But her newly reordered life comes unraveled when she reluctantly accepts an invitation to a dinner party and stumbles upon the host’s dead body. Now Tess is in the middle of a murder investigation pitting her wannabe-boyfriend police detective against Jack Valentine, a man from her past with blue-green eyes and sinful smile that causes her to rethink her self-imposed celibacy. Tess has many reasons to avoid Jack including the fact that he’s the prime suspect in murder. But Tess doesn’t believe Jack’s the murderer and with an honest attempt to keep her hormones in check, she agrees to represent him. With Jack’s help, she uncovers a 30-year-old secret someone is killing to keep hidden and discovers sensual delights that don’t include chocolate or French underwear. But when her professional and personal relationship with Jack threatens to ruin her career and end her life, Tess has to decide if Jack, is worth the risk.