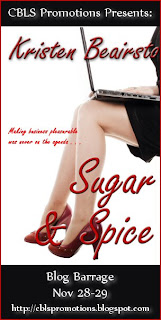 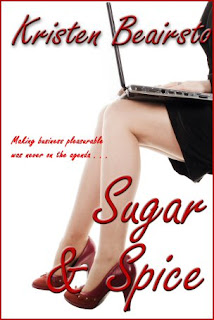 Sugar and spice makes everything nice, but mixing business and pleasure can come with a price . . .

Francis Stevens – Frankie to her friends – has declared herself permanently single after a couple of monumentally disastrous relationships. And she doesn’t mind at all. Between the international expansion of the lingerie catalog company she runs with her friends, labor strikes, and her regular work load, she has little time for love or a relationship.
But Royce Weston has other ideas. After his family accuses him of becoming a workaholic, a chance encounter with Frankie at a night club has his mind on things other than business. As luck would have it, Royce winds up the executive assigned to work with Frankie and her lingerie company when she partners with his family’s investment firm to fund her expansion.
Despite Frankie’s outward appearance of confidence and swagger, insecurities rear up and cause her to over compensate and drive harder for what she wants. Doubts weigh her down and with Royce watching her every move, she fights to keep her businesswoman’s façade firmly in place. But while Frankie tries her best to keep her mind on business, she can’t ignore the way Royce’s touch makes her feel or the fact that he makes it clear he’s interested in more than just a business relationship. When all of her defense mechanisms fail to keep him at arm’s length, Frankie finds herself wondering: is it possible to mix business and pleasure?

“Any chance you’d leave the catalog to come have dinner with me?”

Frankie froze. Was he asking her out? She shook her head, reminding herself it didn’t matter.

Frankie dropped her pencil and sat back in her chair to stretch for a moment, “Sorry, I can’t. I need to get this done as soon as possible. Wisconsin really set me back.” She tried to stomp down her regret.

“That’s what I thought you’d say.”

Whipping around, Frankie stared disbelieving at the sight of Royce standing in the doorway leading to her office. Looking much the same the night he showed up at her apartment with dark hair mussed, suit jacket slung over his arm, tie undone hanging around his neck, and his briefcase in his hand along with a brown paper bag. In his free hand, he held his BlackBerry to his ear.

The corner of his mouth curving upward, he took the phone from his ear and turned it off without taking his eyes off her.

“How did you get in?” Frankie finally asked when she found her voice again.

Arching a brow, Royce pointed to the cell phone she still held to her ear.

Turning her head, Frankie looked blankly at the phone as though she didn’t know how it got there. With an embarrassed blush rushing up her cheeks, she rolled her eyes at herself and turned the phone off.

Royce strolled into the room, “You forget, Weston, Inc. owns this building, which means I have access to a key,” he set his briefcase and the bag of food on the table beside her layouts, “but we can’t talk because we have to dance.”

Coming around behind her chair, Royce pulled it out from under the table, “My mother was born and raised in Vegas. If there’s one thing she taught me, other than never talk to strangers and always brush my teeth …” he informed her as he pulled Frankie to her feet, her shock at his sudden appearance and his announcement made it easy.

Taking her hand in his, he moved her other hand to his shoulder and his free hand took up a firm position at the small of her back. He pulled her so close she felt the heat of his body envelop her, “You never let a beautiful woman sit while she listened to Ol’ Blue Eyes. Frank’s songs were made for dancing.”

As Fly With Me began, Frankie had the vague sensation of her feet moving in step as Royce led her in time with the melody.

“I should warn you, I’ve broken toes before,” she tried for a light tone. She found herself having a hard time breathing. Had the room been this warm all night?

With the same lopsided grin, “I think I’ll take my chances,” he informed her right before moving her into an unexpected turn.

Almost losing her balance, Royce caught her just before she lost her footing, causing her to laugh as she fell back in step with him. She couldn’t help but enjoy herself. When he moved for another turn, she stood ready for him, laughing smugly, ridiculously proud of herself.

“Not bad,” he gave an approving nod.

“Maybe for an empty office, but not exactly ballroom material,” she joked.

The song ended and flowed into Bewitched, Bothered, and Bewildered so quickly, Frankie didn’t even notice when Royce slowed their movements considerably.

Smiling at him, Frankie relished the feel of his arms firmly around her for a moment, “You’re very good at this.”

Royce grinned, “It’s one of the main attractions on my resume. My mother thinks it's romantic to be able to dance this way, while my father only knows how to dance this way. When they started dragging me to their friends’ parties, I didn’t have a choice but to learn.”

“Well, you’re still very good. And I agree with your mother, it is romantic,” she chuckled.

When they actually stopped moving, Frankie didn’t know. But she soon realized they stood still, his fierce sapphire gaze locked with hers. She ordered herself to break the contact to look anywhere else but into his eyes, but she couldn’t.

He leaned slightly downward towards her, “Maybe Mom was right,” he whispered, his head descending the rest of the way.

In between her to-be-read pile and trying to bring the characters in her head alive, Kristen spends as much time as she can with family and friends. Much to her husband’s dismay, she enjoys collecting purses, shoes, and jewelry. During those rare times she’s not working at her day job, rushing her daughters somewhere, watching movies with her husband, and trying to meet a deadline, she can usually be found energetically cheering for one of her favorite New York sports teams.
As with just about every other writer on the planet, Kristen grew up an avid reader. She started with young adult before she technically hit the age range and moved on to sci-fi classics by Isaac Asimov and Ray Bradbury. At fifteen, her best friend gave her a book she just had to read! The book was Honest Illusions by Nora Roberts. Always a sucker for a happy ending, she was a goner and fell in love with the romance genre. Having started writing novel length stories at the age of eleven, Kristen’s stories all took a romantic turn from that point on.

Prize is 5 eBook copies of "Sugar & Spice" (1 each to 5 winners). Contest is tour-wide and open internationally. Must be 18 years of age or older to enter. Ends Dec 4. Enter via Rafflecopter below.
a Rafflecopter giveaway
Posted by Andi at 7:16 AM
Labels: book promo, Coffee Beans and Love Scenes, excerpts, giveaway, romance