'Swept Into the Darkness' Event with Release Day Diva! 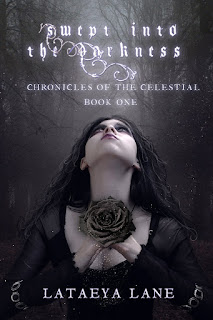 Sydney London is no ordinary twenty-four year old. Ever since she was a child she has had unique out of this world abilities. Suffering from a near death experience and surviving a deadly car crash Sydney is no stranger to death and loss. Cut off from the world around her she encounters an Angel and eventually falls for him inspired by deceitful magic.

Her one true love awaits in the shadows attempting to guard and protect her by risking his immortality. Traumatized by the murder of her best friend she sets off on an unspeakable journey to bring the dead back to life. Sydney's journey of self discovery opens her up to learn of her true angelic identity. She is led in the middle of an inter dimensional war among a hybrid breed of Angel Vampires and the Heirarchy of the Angelic clan. Will her unique powers and the love she bears for her guardian be enough for her to save the Earthly Realm or will she be Swept into the Darkness?

Check out the book in advance! http://amzn.to/Shyg71


Join us Tuesday November 27th from 12-6 pst! We'll have tons of prizes to be won, and lots of fun games to keep you entertained all day long! Come and play!