A sneak peek into the life of Helen Harper, author of the Blood Destiny series

Please welcome author Helen Harper to Andi's Book Reviews, as she gives us a sneak peek into her life.


I’m a bit claustrophobic. Not so that it affects my daily life, but it can occasionally spring up on me and make me panic. The worst time was probably several years ago at a fairground in Japan. Of course, the Japanese are well known for their love of all things horror, and when it comes to fairground rides they are no different. A group of friends and I ended up inside a pitch black room. We had to get inside ‘coffins’, and then actors wandered around making spooky noises and pretending to spit at us. It sounds kind of cheesy and daft, but it was genuinely terrifying and I don’t think I’ve ever been so glad to get out of somewhere in my life.


Nope. I tend to live in fairly rude health to be honest. There was a part of me that wanted to break an arm or a leg when I was kid – it seemed like a lot fun, with the option of potentially getting out of Physical Education if it was a lower limb, or maybe even out of having to write if it was a higher one. And, of course, the joy of getting friends to scribble over the cast appeared endless.

Naturally, I’m now thrilled that I’ve never broken anything! I have pulled muscles a couple of times in my back: once memorably even fainting whilst at teaching at school because the pain was so extreme. To my eternal embarrassment, the local firefighters were in attendance as they were teaching a group of kids about fire safety, so they carried me through the school playground at break time on a chair. I was much heavier then than I am now, and I don’t think it was particularly easy for them. It was definitely mortifying for me. Now I’m very, very careful with my back and immediately find I have to stop and rest if I get just a little twinge. I’ve discovered that if I keep going then I end up just exacerbating old injuries and walking as if I’m in my nineties rather than my thirties.


I’ve always been a bit of a fan of Yeats – when I was younger, I loved “Things fall apart, the centre cannot hold”. At the time it seemed to reflect how life was continually throwing me curveballs until it felt almost as if I was crumbling away at the centre. Gradually, optimism re-asserted itself inside me and my favourite quote became, “Tread softly for you tread on my dreams”. It seemed particularly apt when I began teaching and a very helpful aphorism to live by. However, just very recently, I read Wonder by RJ Palacio and it was jam-packed full of quotes that had me using my Kindle highlighter. My favourite is, “Kinder than is necessary. Because it's not enough to be kind. One should be kinder than needed.” It’s been running through my head ever since, and I think I’ve done a few things differently because of it – and that can only be a good thing.

Helen Harper is an English teacher currently living abroad in Malaysia. As a long time reader of urban fantasy, she finally bit the bullet and began to develop her own series of novels.Helen has always been a book lover, devouring science fiction and fantasy tales when she was a child growing up in Scotland. "I always loved the escapism provided by those genres," states Helen. "No matter how bad life gets, you can always find a route out, even if only temporarily, in the pages of a good book."The growth of urban fantasy fascinated her - the mix of reality and fantasy along with strong heroic female characters appealed from the very beginning, and inspired her to write her own. 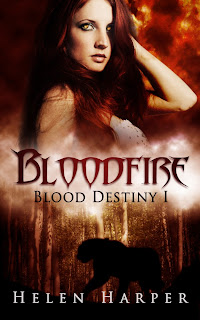 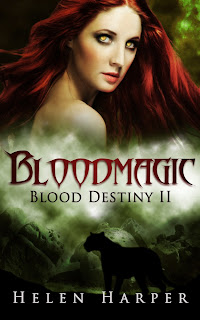 After escaping the claws of Corrigan, the Lord Alpha of the Brethren, Mack is trying to lead a quiet lonely life in Inverness in rural Scotland, away from anyone who might happen to be a shapeshifter. However, when she lands a job at an old bookstore owned by a mysterious elderly woman who not only has a familiar passion for herbal lore but also seems to know more than she should, Mack ends up caught in a maelstrom between the Ministry of Mages, the Fae and the Brethren. Now she has to decide between staying hidden and facing the music, as well as confronting her real feelings for the green eyed power of Corrigan himself. 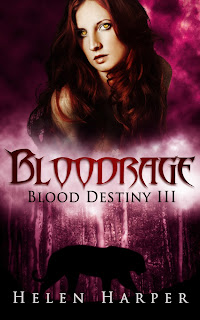 Mack begins her training at the mages' academy in the hope that, by complying, the stasis spell will be lifted from her old friend, Mrs. Alcoon. However, once there, she finds herself surrounded by unfriendly adults and petulant teenagers, the majority of whom seem determined to see her fail. Feeling attacked on all fronts, Mack finds it harder and harder to keep a rein on her temper. Forced to attend anger management classes and deal with the predatory attentions of Corrigan, the Lord Alpha of the shapeshifter world, her emotions start to unravel. But when she comes across a familiar text within the walls of the mages' library, which might just provide the clues she needs to unlock the secrets of her background and her dragon blood, she realises that her problems are only just beginning...


I scanned the bookshelves again, looking for something that might help and was about to pull down a precious gems and magical objects encyclopaedia when I suddenly heard voices and the slamming of doors from outside. Bugger it. Quickly closing down the computer, I stepped back into the outer office. I was just in time because Staines came suddenly striding in with the Lord Alpha. They were in mid conversation and didn’t see me at first.

“My lord, we need to focus on the magic trail before anything else,” Staines was saying.

The Alpha growled. “The mage can do that better than us. It’s the tree markings that interest…” his voice trailed off as he saw me and his green eyes narrowed.

They both just stared at me silently. I cleared my throat. “Well, I’ll get out your way then.” I moved towards the door but the Alpha was blocking it. I looked up at him, waiting for him to move out my way. He folded his arms and continued to stare.

I felt a flicker of irritation from my bloodfire. This was my keep, not his. I moved to brush past him, registering the hard steely curve of his muscles as my arm touched his. He moved further back, blocking the doorway completely.

Buy all 3 books on Amazon:

Helen will award a $25 Amazon GC to one randomly drawn commenter during the tour. Follow the tour for more chances to win!
a Rafflecopter giveaway
Posted by Andi at 1:20 AM
Labels: giveaway, Goddess Fish, interview, vampires