E.M. Havens, author of 'Dark Night of the Soul,' shares her Top 10 books with us. Which ones made your list?

10. The Hunger Games – I liked this book, but what makes me love it, is that my daughter loves it. I prayed that my kids would love to read as much as I did and Suzanne Collins’ book did it for my little girl. She’s read all three books in the series at least three times each.

9. Harry Potter – Again, I liked this book series, but I love it because it’s the series that encouraged my son to read. He begged for the next in J.K. Rowling’s series and before Harry, my son loathed to read.

8. The Stand – This was the last Stephen King book I read before I decided that I just couldn’t read horror anymore. I don’t really consider The Stand horror though. I liked this book for the endless hours of entertainment it presented and the depth of the characters Mr. King created. It’s just one that stuck with me through the years.

7. The Mating – If you haven’t read any of these werewolf romances from Nicky Charles, do yourself a favor and download them. They’re free, and fun, fun, fun. My sisters are into the series and I like being able to talk about the story and characters with them.

6. Wool – Hugh Howey has created a dystopian world I can immerse myself into. Not only that, but he’s breaking the boundaries of Indie publishing. These stories have haunted me and will stick with me for a long time.

5. The Endless Knot Series – This is a historical fiction series by Stephen R. Lawhead. If an author can make a series come full circle and tie it all up, I love it. This series had me jumping and screaming for joy at the end. I won’t give it away.

4. Ender’s Game – I’m hard to fool. There’s nothing new under the sun and all that, but Orson Scott Card surprised me. That puts this book on my top ten.

2. Pendragon Cycle – This is another of Lawhead’s series. His characters were so deep, they became real to me. In fact, I loved one of his characters so much, I named my daughter after her…Charis.

1. Anne McCaffrey’s Pern books – I can’t pick just one. Like I said before, I love it when an author can bring a series together and Ms. McCaffrey did that on a supernova scale. She created a world so deep, and characters so real, I cried when I read the last one, and it wasn’t even sad. I just didn’t want it to be over with.

Who is E.M. Havens? I’m a lot of things. The word that seems to define me most at the moment is mom. It can be all consuming. Not only am I a mom of three (one of them is a teenager…pity me), but I also home-school (pity me more). I share this awesome responsibility with the love of my life, best friend, and soul-mate husband.

Somewhere in there I find the time to write. I started out young writing poems, then moved on to songs. I actually have a Bachelor in Music with a secondary in Science because I can’t stand English. Yes, the writer hates English. I like to read the story for the experience of reading the story, not to nitpick each letter and comma. But I digress.

I eventually found blogging and really enjoyed sharing my life that way. When an unfortunate turn of events separated me from my music equipment, I decided to use my overactive imagination, my love of reading, and my new found hobby, prose writing, to release some of my creative energy. I wrote my first novel and loved the experience. Fate War: Alliance is actually the second novel I wrote and the first to be published. Now I’m working on my third and several sequels to Fate War!

So that’s pretty much me, sitting in the Arbuckle Mountains of Oklahoma, reading, writing, collecting eggs from the coop, and being a schoolmarm. It’s a pretty great life. 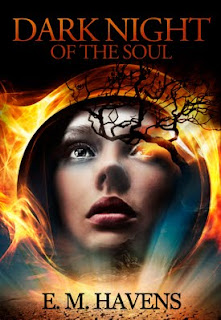 What comes after life? Jayden Schroeder is about to find out. At the end of the road of despair, she ends it all and finds out that living might not have been so bad. Thrust into a strange and disparate world, Jayden joins a team of warriors from all places and time. Together they battle demons to save the souls of the living, all the while on the run from the end of all things - The Judgment.

Will she fight for a second chance to spare those she loves? Or surrender?

Dark Night of the Soul is a fantastical journey, both literally and figuratively for Jayden’s soul. Action adventure, fantasy, romance, and dark humor twist together to create an afterlife tale that will keep you thinking long after the final chapter.


My senses snapped back with sharp clarity. I laid on my back staring at dappled sunlight through a canopy of green leaves. My fingers curled around the soft dirt and twigs beneath them. I was afraid to move, unsure of where I was or what had happened. Hadn’t I just killed myself?

I turned my head enough to see forest to my right. The same on the left. I chanced sitting up a bit and propped myself up on my elbows. Forest in front. My gaze fell to my legs.

I wore camo. Ugh. But I wasn’t fat. I looked at my hands. They seemed older. My boobs! I copped a feel then tugged the collar of my khaki and brown camouflage shirt out and took a peek. They were perfect.

I pulled a strand of hair in front of me. Blonde. Now my heart was pumping.

I scurried to my feet trying to take in more of myself and my surroundings. I wore full military garb with a handgun strapped to my hip. A really big gun lay on the ground next to where I woke up at the edge of a camp with a fire and tents, and everything.

And me. From what I could see, my body looked perfect, just like Becky Greenwood, the cheer captain. I bet my face was too. I bet I even had blue eyes. I must be in heaven. But why camo? “Damn it! Who ordered the newbie?”

I spun to face the gruff male voice behind me. There at the edge of the camp stood a group of five people that my mind struggled to assimilate. A knight in shining armor, a female samurai, and another man dressed in a gold foil jumpsuit stared at me.

The man upfront, who had spoken, wore camo pants like mine and a black shirt. A woman next to him eyed me. She looked like a druid or monk and carried a staff. In a thick Irish accent, she snarled. “Welcome ta hell, brat.”

a Rafflecopter giveaway
Posted by Andi at 1:06 AM