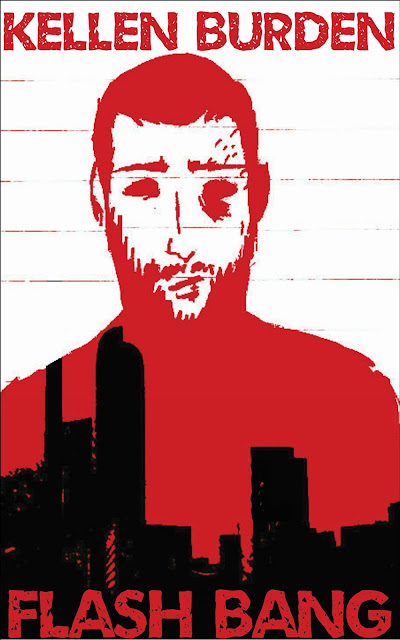 Sebastian Parks is drowning in a flood of his own creation. Dishonorably discharged from the Army, he’s wracked with night terrors and an anger that he can't abate. Unemployable and uninterested in anything resembling a normal job, Parks makes his living in fugitive apprehension, finding wanted felons on Facebook and thumping them into custody with his ex-military buddies John Harkin and Eric "Etch" Echevarria. When the body of a teenage Muslim boy is found in front of a downtown Denver nightclub Parks, Harkin and Etch are called on to do what they do best:

First-time author Kellen Burden serves up edgy humor, brutal action and characters you can’t get enough of. Flash Bang will keep you turning pages until the end.

The grey is settling down hard on the skyline now, reflecting off the Wells Fargo building’s windows, hanging in the air. Steam starts to crawl out of all the manhole covers as the mercury drops down to somewhere in the 30s. Another hour has passed and I’m five blocks up and fourteen over, near the corner of 20th and Washington. A weird little five-points with a Safeway on one corner and low-income housing on the other four. I’m sitting in my car with the engine off, gloved hands mashed into the pockets of my coat, Glock strapped onto my low back. I’m still sans vest because I can’t button my jacket around it, and letting it fly just means they’ll try to shoot me in the face. Out of my fogging front windshield, beyond a row of parked cars, standing in the mouth of an alley, is a guy named T-Bone. He’s about 6’1,” 200 pounds, African American, wearing a do-rag, a Roca Wear jacket, Sean John jeans, and the ugliest pair of Air Jordans I’ve ever seen. Since I’ve been watching, T-Bone has had somewhere in the area of ten visitors, mostly college-looking kids, one or two genuine tweakers. The drill is: they walk up and low five T-Bone. Then, T-Bone looks around for a few seconds and goes into the alley while the guys hang out outside. A few minutes later, T-Bone comes back out and the guys go into the alley, and then the guys leave without another word. The tweakers are better at the low five than the college kids. One of the dopey bastards actually dropped a twenty. I chuckled from the safety of my Xterra, but T-Bone was not amused. In fact, he was so unamused that he made a really nasty face (which didn’t take a lot of effort) and reached down towards his front waistband. Some choice words were exchanged, and the college kid left with a lot less color in his cheeks than when he got there.

My plan is simple enough: I’m going to go talk to T-Bone. That concludes the plan. Sitting here, watching him do what he’s doing, I know that I should call Etch and Harkin, set up a net, do this ninja style and disappear the motherfucker before anyone knows we’re here. But I’m feeling impatient and guilty, so I decide to fall back on the cowboy bullshit that Harkin warned me about. I step out of the car, lock my door, and start across the street in the Denver twilight. When my door shuts, T-Bone locks onto me like a motion light, and by the time I’m halfway there I can see the little animal parts of his brain firing up, looking for escape routes, sniffing for more of me. I keep moving, eyes locked on him, willing him to freeze and he does. When I’m finally onto the curb in front of him, though, he’s so jacked I can smell it. Up close he’s younger than he looks from a distance, probably in his mid-to-late 20s, maybe a little older than me. He’s got an underbite that makes him look like a weasel and eyes that are set too close together to have a whole lot going on behind them. Right now those eyes are darting around so fast that if T-Bone doesn’t move soon, they’re going to jump out of his head and take off without him. He needs to be defused, like a bomb, word by word. We’re a few feet apart when I stop walking. Say:

And I trail off because his right foot is creeping back towards the alley, and his shoulder is following it, inching back, hands rising to defend, to run.

And that shoulder keeps rolling, body telegraphing what a huge pain in my ass he’s about to be, and I say:

But T-Bone twists and breaks like a shot, head down, full out sprinting down the alley, and before I can think of all the good reasons not to, I’m chasing him. 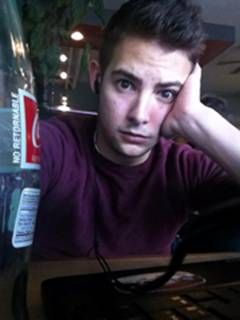 Kellen Burden was born and raised in Southern California and has bounced his happy ass to Denver, Colorado,Portland Oregon and Seattle, Washington. He works in the field of loss prevention, security and organized retail crime investigation, and has recently begun a career with the Oregon National Guard. Flash Bang is his first novel. One time, he fought a bear.
Posted by Andi at 2:00 AM