Welcome to the book tour for Edger by David Beem, now available in an audio book! Check out the playlist that you'll need to accompany this story, plus an excerpt. You can follow the tour for even more. Be sure to let him know your thoughts in the comments and enter the giveaway. And as always, more cowbell!

The official Edger “mixtape” can be found here. It’s meant to be a story companion for fans of the series who also love music. The Kirkus Review for Edger can be found here, and does a fine job summarizing the book for readers unfamiliar with the series.

“Nominal” —#1 Dads
Edger is about a typical Dork—tech support at Über Dork, a subsidiary of InstaTron—who has a chance at becoming the world’s first superhero. His power is entering the dreamlike Collective Unconscious, and the lyrics to “Nominal” couldn’t align more perfectly.

“Wonderboy” —Tenacious D
A superhero song by Jack Black which features in a book with a cast of slackers. Need I say more?

“Action Cat” —Gerard Way
A song about missing your ex. When we meet Edger, he’s still hung up on Kate. “Say you miss me?” the song asks. “And I said I miss you.”

“Invest” —Big Scary
“We store our secrets deep down,” is an evocative phrase, and very appropriate for a book dwelling in the subconscious hive mind of humanity.

“The Ninjas” —Barenaked Ladies
Comedic music about ninjas! One of Edger’s dead allies is the famous Iga ninja, Hattori Hanzo.

“Rocket Scientist” —Teddybears
In the scene’s finale, our heroes venture to a nightclub called Underwearld, and this song is featured. One of the influences of the Edger series is the Zachary Levi action/comedy TV show, Chuck, which also featured this song in season five.

“Rapture” —Blondie
What a weird song. What a weird book. This song is also featured while Edger and Mary are trapped inside a disco ball water torture chamber spinning above the dance floor in Underwearld. Originally, I’d thought to use “Dancing Queen,” but that song is ubiquitous to the point of cliché, and Blondie doesn’t get enough love.

“Thriller” —Michael Jackson
Also featured in finale, when an army of clones takes to the dance floor to battle our hero, who naturally summons Michael Jackson…

“Knock-down Drag-out” —Weezer
Edger is the first of a trilogy about a California boy who discovers a hidden world of super spies and supervillains locked in a knock-down drag-out war. Weezer is among the quintessential California bands, and the song is apt.

“Fake Your Death” —My Chemical Romance
Readers will understand why this song is here.

“We Do It Together” —The Go! Team
Another great, upbeat song from The Go! Team, and has the feel of a good epilogue-type song for the playlist. Edger finishes with newfound allies who will help him “do it together” going forward.

“Sweet Mary” —Weezer
While the first book in my Edger trilogy ends on a decidedly ambiguous note about whether or not Edger’s super spy “cover girlfriend” can be trusted, one thing that isn’t ambiguous are his feelings for her. Weezer’s song is about salvation, of sorts. Edger needed some saving, he was languishing in his job, old before his time, until sweet Mary rekindled his sense of adventure. 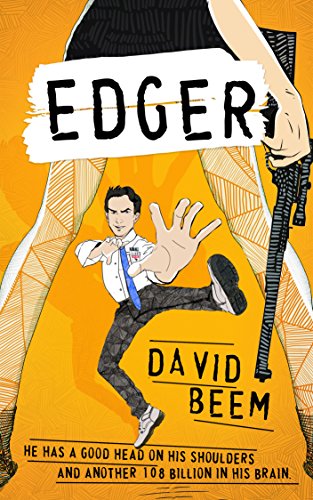 Meet Edger (Ed-jer), a twenty-six-year-old gadget retail dork destined to become the world’s first superhero! His superpower: the ability to channel the Collective Unconscious, a psychic network connecting the living and the dead. In his arsenal are the skills of Bruce Lee, the strength of Samson, the wisdom of the ages...and the dancing chops of Michael Jackson—including that one twisty foot move, crotch grab, and fedora tilt. But there's a catch... Like every psychic super power to get administered through a hypodermic needle, this one comes with a prick. Someone seems to have misplaced the booster necessary for stabilizing his superpower. Without it, Edger has three days before his brain turns to pudding. Join our Dork of Destiny as he overcomes the world’s greatest butt, two rival Cluck-n-Pray gangs, an evil cow, a Green Bay Defensive Tackle, rifle-toting assassins—and a pair of stoners who inadvertently create the world’s first supervillain after a wild night on Twitter!

The water is filling.

Below us, the nightclub turns like a sparkling dream. Worse, Underwearld is wallpapered in phosphorescent art photos of Caleb in his Calvin Kleins.

“Hey Edger—it’s Caleb!” says Mary, banging her shoulder against the side of our disco ball water torture prison and sloshing water. “Caleb! Caleb!”

I roll my eyes. “Of course you know Caleb. Because the universe just couldn’t let me die without letting me know: Hey—Mary knows Caleb.”

“Oh my God, Edger. Not now, okay? High Risk Agency for Regulating the Defense Of the NFL.”

“What!? That doesn’t even make any sense! It should be H-A-R-D-O—wait, somebody capitalized the freaking O—?! You know, my tax dollars paid someone to capitalize that letter O.”

“Really? Really, Edger? You want to do this now?”

“That’s what they always say too: ‘You wanna do this now.’ But notice they never balance the budget. All I’m saying is, you gotta talk about it sometime.”

So I’m panting, she’s panting, and Caleb’s down there scanning the room in front of a larger than life phosphorescent photograph of his crotch. Because apparently all paths in life lead there.

And so there we are, yelling our butts off, banging our shoulders into the wall, water sloshing over our faces—you know, not panicking.

Then the water level reaches our chins.

David Beem loves superhero movies, taekwondo, and flossing. He lives in Djibouti with his family and crippling self-doubt. To help actualize David’s inner confidence, visit his website and buy all the stuff: www.davidbeem.com

David Beem will be awarding a $10 Amazon or BN GC to one randomly drawn commenter via Rafflecopter. Follow the tour for more chances to win!