The Circle 8 Writers group consists of some of my online writing friends. They have numerous collections of short stories available for purchase. The excerpt being featured today comes from Robert Arend's story "The Andre Peterson Conspiracy" from the book If.

Read an excerpt from "The Andre Peterson Conspiracy"

McQuaid nodded. “I believe in the cause, sir.”

“And what cause is that, Lieutenant?” Peterson asked. Sometimes he wasn’t sure himself what his original purpose was for founding Centurion in 1979.

“To promote a peaceful world for Capitalism and remove any obstacles to that, sir.”
Peterson pretended to examine the contents of McQuaid personnel folder.

“Centurion’s mission is to support global power in the hands of a very few extraordinarily competent individuals, Mr. McQuaid. Democracies are inefficient and dangerously prone to encouraging the anarchy of the masses at the expense of good governance. Mr. Kissinger is reviled for declaring, years ago, that the population of useless eaters must be thinned, but he was right. It was what Hitler so incompetently tried to do; yet it is Hitler’s vision, stripped of foolish anti-Semitism, we are dedicated to more patiently, more methodically, fulfill.”

The question took Peterson by surprise. He stammered a bit with his response. “Slow, slow, Mr. McQuaid. 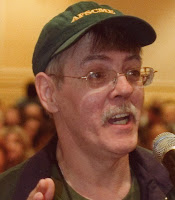 Robert L. Arend is one of the Circle 8 Writers who contributed to this short story anthology.
Posted by Andi at 12:00 AM
Labels: short stories